In a way, it was inevitable that one day choreographer Matthew Bourne would make a stage adaptation – seen 15 December at Sadler’s Wells in London – of The Red Shoes, the classic 1948 film made by movie moguls Michael Powell and Emeric Pressburger. The story is a perfect vehicle for both Bourne’s theatrical and filmic sensibilities.

The movie gave new meaning to the term ‘moving images’, by incorporating a 17-minute ballet piece that not only aptly captured, but also enhanced the ballet experience. The piece, called The Ballet of the Red Shoes, was choreographed by Robert Helpmann and Léonide Massine, who both also played parts in the film. It was based on the fairy-tale by Hans Christian Andersen, about a girl who literally dances herself to death.

The leading role of the ballet-in-the-ballet (or film) is performed by a character named Victoria ‘Vicky’ Page (played in the movie by Moira Shearer, in the Matthew Bourne performance by Ashley Shaw). Vicky is a talented ballerina, who, in the end, is forced to choose between love (her composer boyfriend Julian Craster – Marius Goring/Dominic North) and art (embodied by ballet director Boris Lermontov – Anton Walbrook/Adam Cooper).

The staging of Matthew Bourne’s The Red Shoes is simply scrumptious, and smart. There is the clever illusion of a stage within a stage. It is reversible, so that seen from the front, you view the stage from the point of view of the audience; seen from the back, you are suddenly transported backstage, getting a rare glimpse behind the scenes. 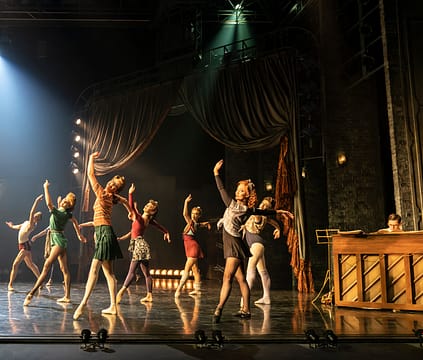 The clever conceit of watching a ballet within a ballet was also present in Swan Lake, Matthew Bourne’s most famous work which premiered in 1995. His decision to swap the gender of the swans – and keeping the human prince male – was a stroke of genius. It turned a tired boy-meets-girl story into a psychologically gripping, yet also highly entertaining, drama. His vision of male swans even made more sense, realistically. Swans are anything but dainty and delicate. They are fierce and imposing beasts (the swans in Matthew Bourne’s Swan Lake even make hissing noises while dancing).

Compared to Swan Lake, The Red Shoes is a decidedly more faithful adaptation, barring some characteristic Matthew Bourne comical touches. Watching his pieces is a bit like watching a live painting of Pieter Breugel the Elder: there is just so much happening at once.

The biggest change Bourne has made is with regards to the music. Bourne has opted against using the original score by Brian Easdale. Instead, he has repurposed film scores by musical legend Bernard Herrmann. Herrmann is best known for his many collaborations with Alfred Hitchcock, but Bourne has also used excerpts from Citizen Kane (1941) and The Ghost and Mrs. Muir (1947). The music works remarkably well. Having it performed live is an added bonus.

The leads offer great performances, with Ashley Shaw as the definite stand-out. Shaw won a National Dance Award for her role when the piece first premiered in 2016 (the piece was also awarded two Olivier Awards, one for Bourne as Best Theatre Choreographer, and one for Best Entertainment). A brutal duet between Vicky and Julian, just after the couple has left Ballet Lermontov and Vicky is forced to perform at a vaudeville theatre, where the ribbons of her red shoes are trailing behind her like she is a wounded animal, is simply breath-taking.

If you don’t know the original movie, the story can sometimes be a bit hard to follow, especially near the beginning when Vicky first encounters Lermontov during a soiree her aunt is hosting especially for her. The train that Vicky throws herself in front of, unable to choose between love or art, appears literally out of nowhere.

But this is nit-picking. For fans of the movie and for lovers of ballet, The Red Shoes will certainly not disappoint.