Shake Shake Shake by performance group De Dansers, seen 9 January at De Krakeling, is a show that doesn’t let itself be boxed in. Even the name of the company – The Dancers – doesn’t adequately describe what is going on. Yes, there is dance and there are dancers in Shake Shake Shake, but that is not what defines it.

The company, led by Josephine van Rheenen (who is responsible for the concept and choreography) and Guy Corneille (who also performs), makes dance concerts, an energetic and infectious mix of live music and contemporary dance.

Of the six performers three are professional dancers (Wannes De Porre, Yoko Ono Haveman and Marie Khatib-Shahidi), and two are professional musicians (Hans Vermunt, Ruben van Asselt), but they are never defined by just this one talent. It is epitomized in Corneille himself. Originally having studied sociocultural anthropology, he eventually became an artistic director, musician and physical performer for De Dansers. In the same vein, all performers are encouraged to reach further, even outside their comfort zone. The musicians dance, the dancers make music. 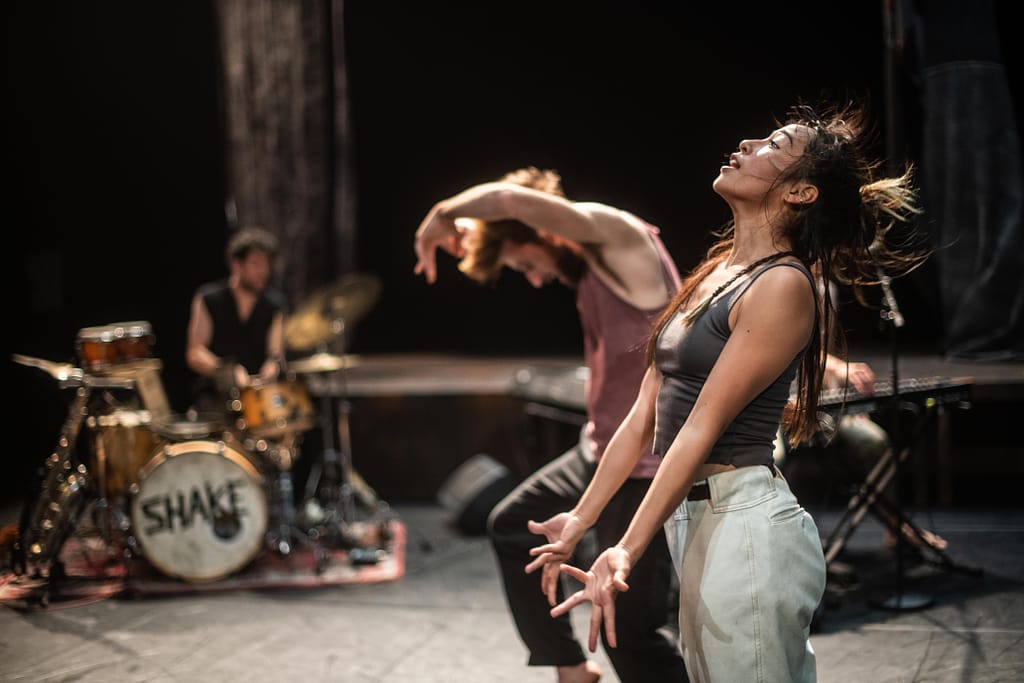 One of the biggest revelations here is Wannes De Porre, who was schooled in dance, but in Shake Shake Shake also plays the saxophone and performs a ballad (Lights Out) for which he wrote the lyrics himself. Everyone contributes. There are no designated areas.

Shake Shake Shake started life outside, in the open, during the Oerol festival on the island of Terschelling in June last year. Transporting the show to indoor venues enhances the feeling of watching a concert. There is even an encore.

The musical talent is undeniable. Until the spring of 2019, Vermunt and Corneille were part of a musical trio called La Corneille. Some of the songs seem well suited to their target audience (which is 14+), especially the first one, called Do Better. It is about the pressure of having to live up to expectations, from your parents, your teachers, your peers. ‘That’s not good enough. You gotta do better,’ sings Vermunt. The song Disconnect (also written by Vermunt) is about the need to break free from our dependence on technology, social media and other outside influences. (Disconnect / Pull the plug / Shut it down / Shut it up). At the same time the songs, and the show, are truly universal. At tonight’s performance there were certainly more adults than teenagers in the room. One of the strongest texts comes from a poem spoken by Corneille: ‘All my days are sold, none of them are free. All my days are them, none of them are me.’ Who doesn’t occasionally feel like their life is being led for them? Who doesn’t long for the chance to really break free?

The music is the stronger thread in Shake Shake Shake. (Good news: you can buy the music as a CD, and find most of the songs on Spotify). Most of the time, music and text take the lead, while the dance follows. If the singing grows louder, the dance grows wilder. A contemplative piano solo elicits a pensive solo by Haveman.

What the dance does do is add a beautiful extra layer to the music. You could imagine one without the other. But the world would be the poorer for it.

Samuel Wuersten: "I think dance is one of the strongest and most distinguishing art forms the Netherlands has to offer."