For All We Know

Trying to assign meaning to For All We Know – seen 24 January at Korzo Theater – proves to be a tricky task. To start with, I love the playful way choreographer Antonin Comestaz mixes and matches different styles, from jazz and contemporary to mime, even including movements one wouldn’t normally associate with dance.

In For All We Know a recurring theme is fitness. One dancer manipulates the arms of a colleague as if they were fitness ropes. Later on, the four perform a scene in which two dancers are transformed into a home trainer, the third is the biker and the fourth is the coach.

I also admire the effortless way Comestaz switches gears. The first three scenes almost couldn’t be more different from one another. The intro, where the four dancers (Matija Franješ, Frederik Kaijser, Olivia Lecomte and Romane Petit) are furiously dancing and striking poses while standing in front of backlights, looks like a scene straight from Fame, the musical. The next moment we are transported inside the starkly lit interior of a gym, to move to a decidedly darker and more cavernous environment straight after (lighting designed by Albert Tulling).

The inquisitive and unconventional way Comestaz approaches movement is applicable to his use of music as well. Alternating with more traditional music, Comestaz (who made most of the sound compositions himself) also uses ambient sounds, like the sounds of weights clinking together and of a working treadmill. One of his most exciting soundscapes is the one the solo dancers create themselves while moving on a plateau, which is rigged with a microphone. This way, every foot scrape, every twirl, becomes music. Even if the dancers are standing in place, moving only body parts that are not in direct contact with the plateau, it creates sound, resonating through the body into the floor.

It all feels very eclectic and whimsical. Especially the movement in the ‘gym’ scene has a playfulness and levity. While one dancer is striking yoga poses or doing push-ups, the other three are creating the most elaborate human contraptions. Comestaz showcases a great eye for small details, as  in one of the more ominous scenes when one of the four dancers keeps phasing in and out of formation, as if temporarily lost in thought, and then picks up the thread again. Or in the way the others stop in their tracks whenever one dancer steps onto the plateau. 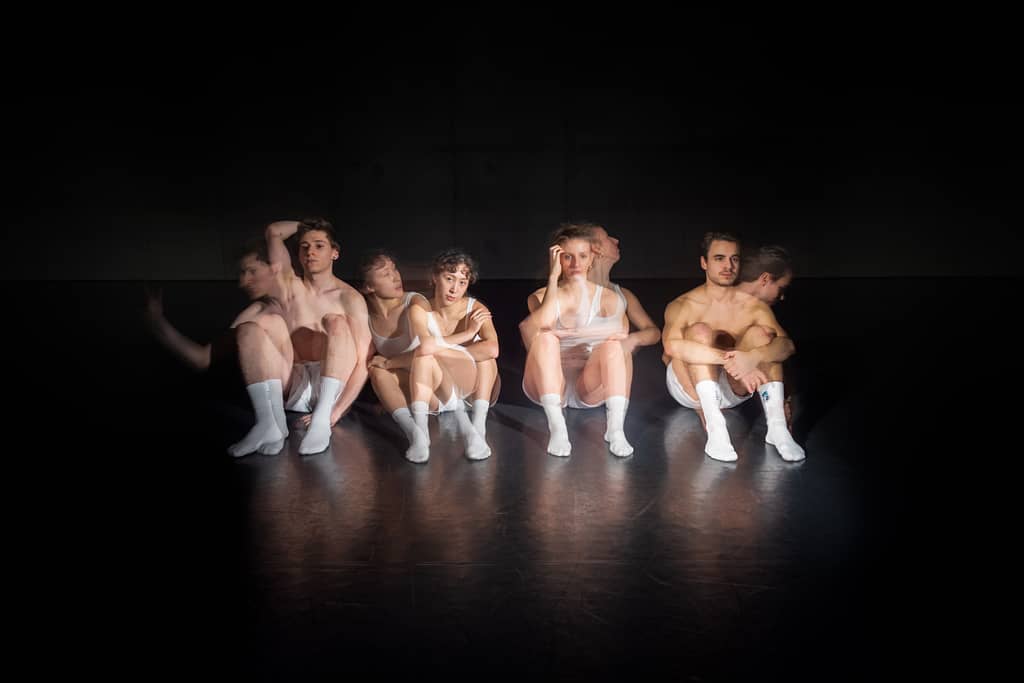 The first half of the performance I was awestruck with the inventiveness, and the many ways Comestaz keeps the audience on its toes. I had no idea what he was trying to say, but it didn’t really bother me. I was mesmerized. But the longer the performance lasted, the more the lack of clear progression began to take me out of the experience. One scene looked like a retracing of steps from the gym scene, only this time in solos or pairs. The two videos projected on the floor and on the – now raised – plateau (one showing close-ups of the four dancers painted as white clowns, the other showing buildings slowly collapsing and then rebuilding themselves) looked like they belonged in a different performance altogether.

I felt myself grasping at straws trying to find meaning in it all. But maybe I am not supposed to. ‘Okay. Here we are. Same players, new game.’ These are the first words on the program. Maybe not having a clear arc is exactly the point. Maybe I should have just sat back and enjoyed the inventive ways Comestaz stacked one building block  on top of the next. If the hour-long performance had been half as long, it probably would have worked. As it was, I needed more support.

Who said math was boring?