While on my way to ANΩNYMO, part of Brandhaarden Festival at ITA, this Saturday 1 February, I had an unusual encounter. A woman, who introduced herself as Anna, asked me for the time. As thanks she involved me in an elaborate ritual comprised of several hand gestures, which included high fives, fist bumps and several fingers of God. Walking away I felt flummoxed. To be totally honest: afterwards I subjected my rucksack to a complete bag check. Twice. Sorry Anna!

Still, this chance encounter proved to be a great opening act for ANΩNYMO by Greek choreographer Tzeni Argyriou. Argyriou laments the fact that in our current world, our relationships occur more and more online, and where human to human contact takes place mostly through touch screens. Why not go back to a time before technology took over, when dance offered a way to collectively connect?

The title, so the brochure for the performance tells us, refers to the old days, when art was anonymous, not the product of one singular author, but a collective experience. But when linked to current times, it can also refer to the anonymity of social media, where you can hide behind a nickname while venting your deepest and darkest thoughts.

At the beginning of the performance the faces of the seven dancers – four women, three men – are obscured. Dressed in black, some with their hair in front of their faces, against a black backdrop, only their pale arms stand out. Each pair of arms and hands seem to form a different symbol – it almost looks like sign language, spelling out the title of the performance (seven letters for seven dancers), though I can’t be sure. After this striking opening pose the dancers alternate between being in stand-by mode, body relaxed, head slumped to one side, and being wholly engrossed by small repetitive tasks, mostly performed with their hands. Their eyes are downcast, glued to invisible screens.

All dancers are facing the front. They seem totally oblivious to the people surrounding them, while at the same time clamouring for attention. One woman emits short elated shrieks, as if she is an emoji made flesh, a man promises us the top six exercises for the perfect six pack and a run-down of all the things you need to do/see/experience before you die. 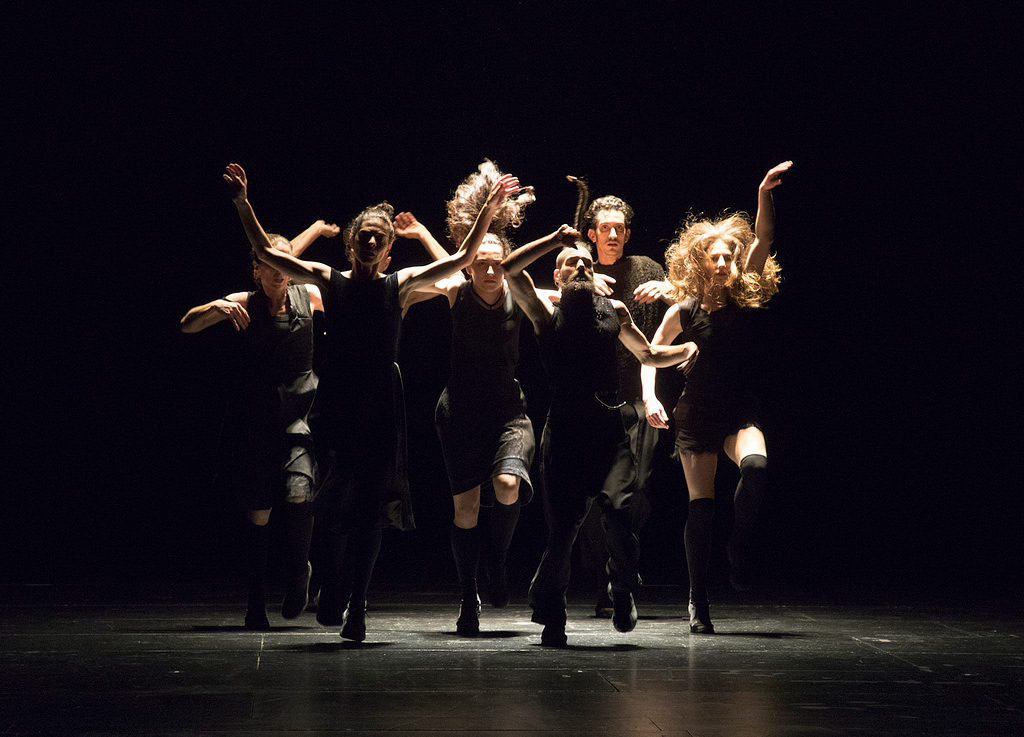 The seven dancers are stuck. Something has to change, and something does. The shift starts with the hands, suddenly aimless, when there is no more scrolling or tapping to do. Their gazes shift upwards, their bodies move. Then, one woman raises her hands, arms at an angle, palms outstretched. She bends her knees slightly, the others follow. She starts making slow circular motions. Slowly but surely, the dancers start dancing, together.

Argyriou has been inspired by older traditional group dances, and flits from inspiration to inspiration, but she wisely never makes the references too literal. It feels more like they are distant memories, drifting in and out of consciousness. The dancing produces flashes of recognition in the spectators as well – one sequence, with the sounds of tolling church bells in the background, temporarily transports the audience to a town square. Yet Argyriou also cleverly shows us that these collective dances aren’t only something from a bygone era, being performed in town squares, courts or around the fire, with a group scene that starts out as a rave then turns into a tribal dance. Actual human to human contact can still happen. We just have to look up, and remember.