Diego Rivera is a drag. Which says very little about the dancer (principal Artur Shesterikov) who portrays him, but a lot about the way the character is portrayed in Frida, the new, evening-length performance by the Dutch National Ballet. Frida had its world premiere on February 6 with Maia Makhateli in the lead. I attended the show on Saturday, 8 February, with Salome Leverashvili, at Nationale Opera & Ballet.

Mexican artist Diego Rivera was the love of Frida Kahlo’s life. From the moment they were formally introduced in 1928 until her untimely death in 1954 the two were in a passionate yet also tumultuous relationship. They married each other twice, but were also involved in extramarital affairs (Kahlo had both male and female lovers). Rivera trumped Kahlo when he started bedding her sister.

As for presentation, the two lovers couldn’t be more different. The differences are most glaring in a scene in the second half when Rivera and Kahlo travel to the United States. Frumpy Rivera, with unkempt hair, a padded bodysuit, and baggy brown trousers, blends easily into the depressive blacks and greys of the American high-rises (and a toilet bowl on a pedestal). Kahlo, one of the most famous female artists in the world, stands out in her colourful traditional Mexican attire.

Colombian-Belgian choreographer Annabelle Lopez Ochoa made an earlier performance about Frida Kahlo’s life: her 45-minute piece Broken Wings for the English National Ballet in 2016. She always wished it could have been longer. ‘Before you know it, she is dead.’ Ted Brandsen at Het Nationale Ballet gave her the chance to build this into a full-length feature.

There is much to love about Frida. There is the spirited performance of Georgian grand sujet Levarashvili, who has been shooting up the ranks within the Dutch ballet company since she started at the Junior Company in 2016. There are the exuberant sets and costumes by Dutch designer Dieuweke van Reij. There is the fact that the lead female dancer dances most of the performance without pointe shoes (as a reflection on the tragic accident Frida had at 18 that left her in pain for the rest of her life). It is quite a common occurrence in other companies, but not here. I liked the way the four main skeletons (Jared Wright, Martin ten Kortenaar, Nathan Brhane and Pascal Johnson) – who all have crooked spines just like Frida – function as a Greek chorus, observing Frida’s life and commenting on it.

There are also striking images, like the one where a deer (soloist Floor Eimers) skips by through a wood made up of deep red umbilical cords (right after Frida has suffered a miscarriage). I even teared up when Frida started painting for the first time, and ten of her self-portraits sprang to life in full colour: all danced by men having a blast swishing around in their huge skirts.

But in the end, Frida is a bit of a let-down. After a strong first half, the second half feels like much of the same. There is not that much variation in the choreography: the male Fridas continue their flapping and swishing, the deer goes on skipping. The performance works best when Lopez Ochoa doesn’t adhere too closely to Kahlo’s life story. There is a vibrancy to the colourful, surrealistic sequences directly inspired by Kahlo’s work – six reproductions can be seen in the gallery of the theatre. But the autobiographical parts tend to drag, especially when the focus is on everything Frida had to endure. 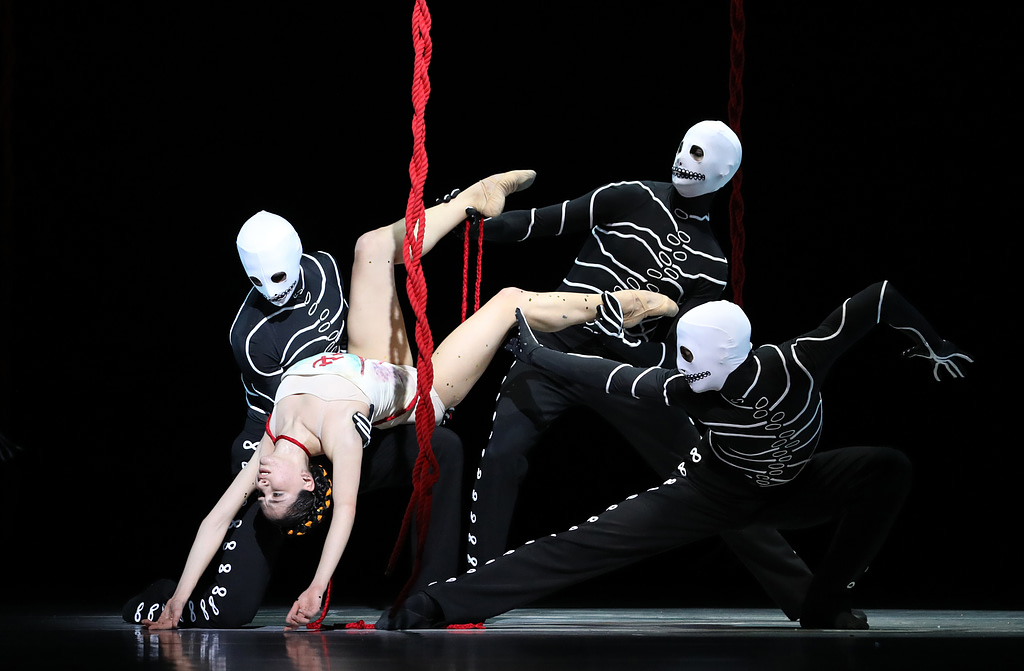 Of course, she did have to endure a lot. She was in constant pain, experienced a great deal of heartache. But when talking about Frida Kahlo, what do people remember? Not her hardships, her unfaithful husband, not all the things she couldn’t do. People remember the way she embraced her art, her heritage, her sexuality. She was a vibrant and passionate woman, who didn’t need others for inspiration. As she herself once said: I am my own muse. That part gets lost in translation.

When Lopez Ochoa first started researching the life of Frida Kahlo for Broken Wings, a Kahlo-cognoscente implored her not to portray Frida as a victim. Having Frida end up in a box, pinned up like a butterfly by Diego Rivera; I don’t think she completely succeeded.