Several blocks of ice hang from metal chains from the ceiling. Different in size and distributed all around the performance space, their melting presence immediately establishes a symbolic, dramaturgical frame: this landscape is bound to change. Like ice, dance lends itself beautifully to the concept of transformation. Premiered at Dansmakers Amsterdam on 6 February, Lois Alexander’s Neptune pivots on the morphing of both medium and matter to invite us to rethink and rewrite our visual reading of her body from scratch.

In order to write anew, you need a blank page first. Cleverly placing an oval mirror in contact with her body, Alexander kicks off by tricking our assumptions of what we see. Thanks to the body-parts reflected in the mirror, instead of a human we are faced with a mutant and mutating creature, with three or four legs, or with a hand instead of a head that looks in awe at its own reflection.

In the well-divided scenes that follow, Alexander’s presence changes, to embody other possible readings. If first she seemed more of a puppeteer, focused on the necessary handling of the mirror to allow for a given image to appear, in part two we see her become a dynamic one. Interacting, translating and transforming the qualities of the melting ice into movement, she beautifully dances her environment. Delicate yet sharp, controlled but fluid in her limbs, now breaking in fragments and changing levels, never losing her ground.

When Shannon Sea’s musical composition suddenly falls silent, part three draws our attention to the value of symbols. Alexander places a chain, similar to the ones hanging from the ceiling, horizontally on the floor, upstage. Lifting it up as it were a curtain, beautifully lit from the back to reveal only her silhouette, she starts telling tales with it, appearing now as a Medusa with metal serpents crawling around her on the floor, now as a diva with a boa on her shoulders, now as a slave. Alexander herself moves from image, to body moving, to metaphor. 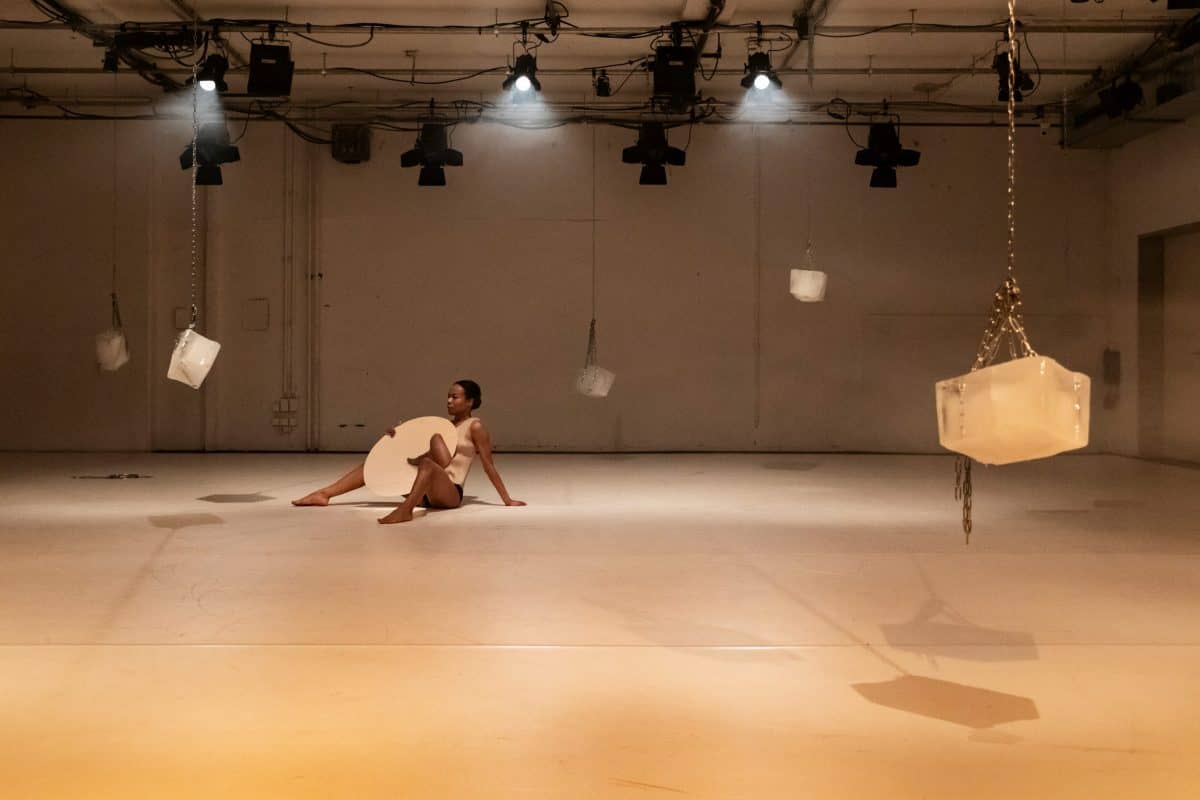 Her theatrical presence becomes more apparent as the piece evolves and with it, the political message she wanted to deliver all along. The body that we are looking at is a black, female body, with all the baggage this entails. Alexander finishes by stripping down to perform herself as such, and delivers a hard-to-follow monologue related to the idea of going back to a centre. She speaks in an angry tone unrelated to any build-up of dramatic tension within the piece.

These final choices turn the upward dramaturgical line into a bit of a slippery slope, as unsteady as the floor itself – an otherwise very interesting factor within the stage-design by Nina Kay. It ensures the matter of space transforms alongside the matters of the show thanks to the melting ice. The morphing universe of Neptune already allowed for a political deconstruction of our gaze upon Alexander’s body, as we were made aware of its possible readings. The shift from dynamic suggestion to flesh-and-word specificity turns the audience, in the end, into passive receivers of a an unclear pamphlet. A change in perspective that left me, engaged as I was, quite cold.