Sometimes music in dance performances sets the mood, sometimes it brings cohesion. The musical soundscape Jochem Baelus has made for Transmute by Sandman – seen 11 February at Theater Bellevue – does both.

Even if you walked into the theater knowing absolutely nothing about the performance by choreographer Sabine Molenaar, the sounds in the background tell you all you need to know: unseen floorboards are creaking, distorted children’s voices are crying out, there is the moaning of an otherworldly animal. All the while the stage remains pitch-black.

When you finally see the four performers for the first time you have already been auditorily primed: this is not a place you ever want to end up yourself. The performers are sitting and standing motionless in a bare room. A bell rings out. Once. The four dancers briefly look up, and look away. The stage goes dark.

The use of blackouts to jump-cut from scene to scene reminded me of Headroom, a performance made by Erik Whien and Boogaerdt/VanderSchoot (which was nominated for the VSCD Mime Award in 2018). In both pieces you never know what the next black-out will bring. In one of the first scenes the man (Janosch Horn) is propped up against the wall at an awkward angle by the three women. In the next, all are huddled together, their eyes following the flightpath of a fly we all can hear but can’t see.

While the structure resembles that of Headroom, when it comes to sensibility Molenaar has a greater kinship with Peeping Tom (Gabriela Carrizo and Franck Chartier). She even performed in their piece 32 rue Vandenbranden in 2009. You can see it in the way she contorts the human body to create an alienating effect, and in the worlds in which her performances are set: worlds that come close to, but are not quite reality. 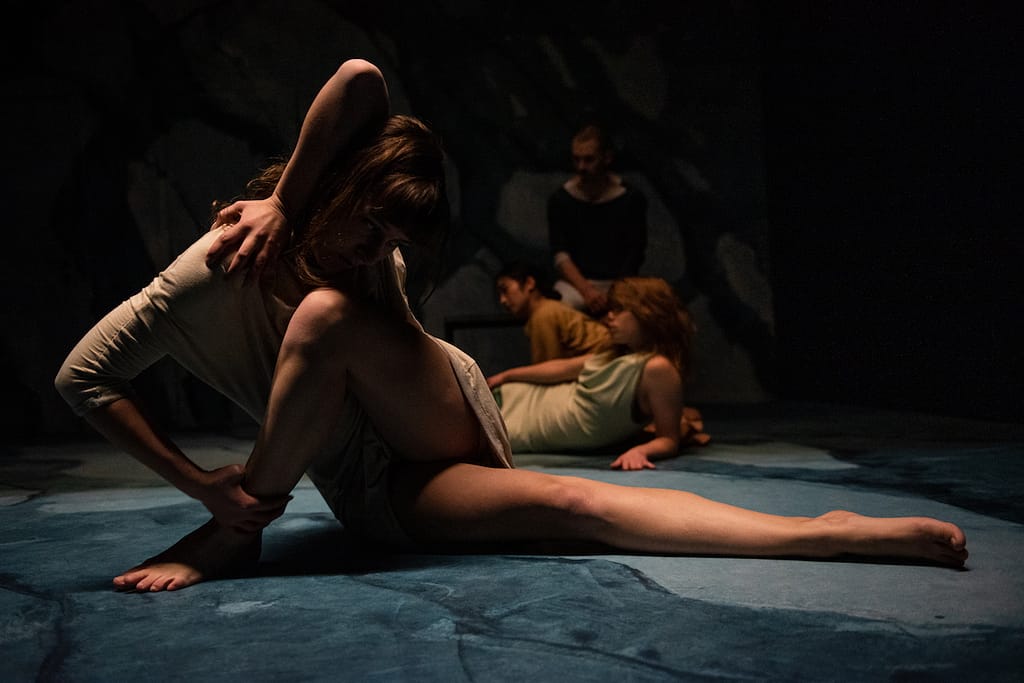 The characters in Molenaar’s first three solos – this is her first group effort – were ‘drifting between layers of reality (That’s It), existed in a ‘dreamlike universe’ (Touch Me), or had withdrawn themselves ‘from the turmoil of the outside world’ (Almost Alive). It is probably no coincidence Molenaar named her company, Sandman, after a mythical creature who brings people into a dream state. Although in this case, there are no beautiful dreams to be had, only nightmares.

Before seeing Transmute I never realized in how many different ways people can twist and turn their bodies: Lisa Bless twitching around like a malfunctioning Stepford Wife; Joséphine Terme in a golden minidress tumbling about on a big bedsheet spread across the floor; Marcia Liu moving with small staccato movements, as if she were a ghost in a supernatural Asian horror story.

Transmute is filled with arresting scenes and intriguing ideas, such as the way Horn’s body starts moving from wherever the light touches it. I also liked the way the performance starts to spread outwards, from the central slightly elevated platform in the middle onto the normal floor.

There is still room for improvement in the way Molenaar knits all the different scenes together, especially once she does away with the black-outs. I got the sense that there is a bigger story in there, somewhere, but I’m not sure what. Are all the performers inmates of a mental institution? Are they in line for purgatory, waiting for their number to be called? Are they living in a nightmare? And if so, whose? As it is, Transmute feels more like a collection of loose associations.

It is the music and the soundscape that pull you along, especially during the black-outs, where the sounds of static, murmuring pipes and even a foghorn make one scene bleed into the next. The performers are mesmerizing to watch, but a narrative thread would have tied it all together.