David Middendorp really likes technology. It plays an (all)important part in each of his three pieces in the Introdans family production Gek Gezicht (which can be roughly translated as funny face, but is also an expression that means something looks odd). Gek Gezicht premiered 7 March at Stadstheater Arnhem.

Middendorp, who once danced at Introdans himself, rose to international fame with his piece Blue Journey, which had its world premiere at Introdans in 2008. Set to music by Radiohead, Middendorp cleverly uses animations on a huge backdrop, with which the five dancers seem to interact. Each shadow seems to have a mind of its own, lingering when the dancer walks on, dancing when the owner stands still. They can multiply to form a crushing wave, or fall from the sky as in a Magritte painting. Even though the animation is pre-recorded, the illusion of interaction works really well.

In Face Machine (2015) there is a bit more actual interaction. Inspired by our current selfie obsession, individual dancers’ faces are superimposed on a big screen in such a way that it looks like the other – smaller – dancers are dancing around and on top of them. The interaction works both ways, with the small dancers standing on eyelids and hanging from nostrils. The big head can move the dancers out of the way by blowing or licking (of which there is a lot). The movements in Face Machine weren’t quite as well synchronized as they could have been. There was also a bit too much tongue action for my taste. But the work does make good use of Demi Verheezen’s expressive face.

With the world premiere of Wereldleiders, Middendorp takes his dance/technology symbiosis even further. The two world leaders/dancers in the piece (Ruben Ameling, Aymeric Aude), are wearing costumes dotted with small sensors. These allow the dancers to influence what happens on the screen. At one point, their arms seem to change into flashlights: wherever they point, the light follows.

Middendorp took his inspiration from the hand gestures of actual world leaders – especially those of Hillary Clinton and Donald Trump during their 2016 election debates. At the end of the 13-minute piece, Ameling and Aude seem to be scaling a climbing wall, where the hand and footholds have been replaced by actual hands.

The actual face-off between the two dancers is underwhelming. They feel more like a series of gestures and feints than actual choreography. The dance is eclipsed by what is happening on the screen. Which would be one thing, if what is shown on the screen wasn’t so disquieting. The dancers appear to be in an underground shelter, at the end of the world. All the computer screens are showing test signals; an ominous whirring and clicking can be heard in the background. Near the front, lifeless bodies are piled up. Well, not completely lifeless. Some of them start to twitch when the dancers come too close. While the two dancers are busy facing off, the body count keeps rising, with new bodies dropping down from a hole in the ceiling.

It is not clear if the bodies were supposed to move more, influenced by the movements of the two dancers, though I doubt that would have made the piece more family friendly. 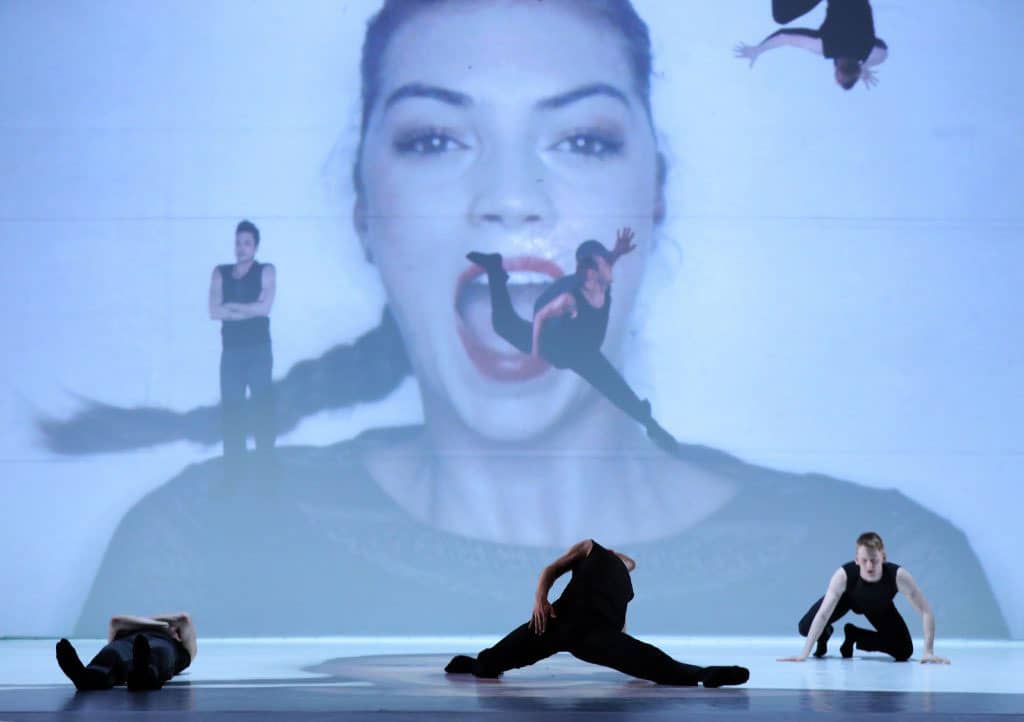 Gek Gezicht closes with two pieces by Alexander Ekman. In a way, Ekman can be seen as Middendorp’s polar opposite. Whereas the latter likes to work with virtual reality, Ekman likes using objects you can actually touch, be it prickly plants (Cacti), treadmills (Left Right Left Right), or twelve chairs in WHIM, fractured fairytale (2006), which made its Introdans-debut. Made originally for IT Dansa, it really delivers on the whimsy: one quirky scene effortlessly flows into another (without even once engaging in musical chairs).

The best piece of the night was Ekman’s second contribution: Swingle Sisters. Swingle Sisters proved to be very on topic as well, even if it was by coincidence (the piece was made in 2005). In times when every cough seems to spell corona, three female dancers (Swingle Sisters) start by performing a hilarious choreography that is completely made up of coughs. The piece ends in a delicious crescendo, with Sauerbreij ecstatically dumping raw eggs, popcorn and a quarter of milk all over her body. In these times of doom and gloom, Swingle Sisters provides us with just the lighthearted entertainment we need!