We are certainly living in eventful times. At noon on Thursday, 12 March I had an interview with Cinedans Festival’s director Martine Dekker. We talked about the upcoming edition of the festival, which was set to take place at EYE Filmmuseum from 25 – 29 March. Not 24 hours later, the event was cancelled as part of the strict measures against COVID-19. A small selection of the programme will now be made available through Cinedans WEB.

Cinedans started life as part of Julidans in 2003, with screenings at De Balie, director Marine Dekker tells me over coffee in the café at EYE Filmmuseum. ‘Janine Dijkmeijer and Hans Beenhakker had attended a dance film festival in San Francisco and thought: this would be great to bring to the Netherlands.’

Julidans proved a great first step for the festival, but in order to grow, Cinedans needed to spread its wings and become a fully-fledged festival in its own right. Another aspect that may have influenced this decision is the opportunity to move the festival dates; in the middle of summer people would be hard pressed to go inside to watch a movie. In 2010 Cinedans went solo. In 2013 the festival found its permanent home at the new EYE Filmmuseum in Amsterdam Noord.

That same year Dekker became the festival director. ‘I had been part of Cinedans as business director since 2011. I took over Janine’s position of festival director in 2013. Now I share responsibilities with our artistic programmer and producer Andreas Hannes. We also collaborate a lot with other dance film festivals from all over the world.’

Since 2017 Cinedans has had a slightly different format, alternating a full international edition every other year with a slimmed down edition that mainly focuses on Dutch input and output (this 17th edition would have been the international one). ‘This idea originated from a very practical, financial focal point. It was just not doable to create a big international festival every single year. We started entertaining the possibility of a bi-yearly edition on a smaller scale, with a large national focus on education and talent development where makers can come together to learn, talk, and explore. In 2015 we created Cinedans LAB, because we noticed the need from both dance and film academies for support in making dance films, which is different from making a dance performance and from making a movie. There are different tools involved.’

So exactly what constitutes a dance film? ‘Put simply, it is a coming together of two separate disciplines which then turns into something new. The very first dance films originated more from the film side, from film makers like Maya Derren who wanted to capture movement on film. But dance has to be a leading component.’ Dance films can take many shapes and sizes. One of the more straightforward is the dance registration, a dance performance put on film. ‘I have to admit I’m a bit wary of straightforward registrations, of just pointing a camera at a pretty dance routine. Dance registrations are often solely captured from the point of view of the choreographer. But there has to be a strong filmic component as well, where the camera adds an extra dramaturgical layer.’ 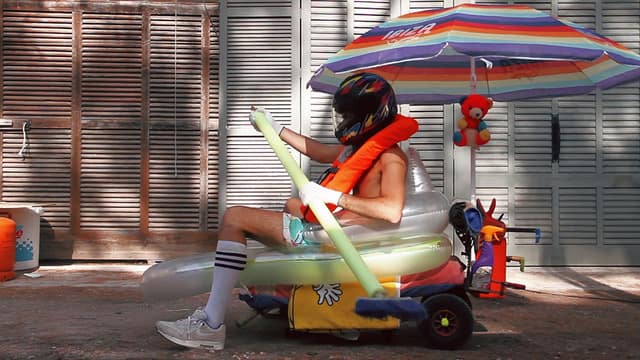 Over the last couple of years, choreographers have started to take notice. ‘Dance makers are increasingly starting to appreciate the potential of film as a medium, and the almost infinite possibilities film can bring. Dance is usually constricted to one time and space. Film can set dance free.’ One great example can be seen in The Great Ghosts which will be available on Cinedans WEB from March 25. It is a cinematic adaptation of The Mechanics of History – an attempt to approach a point of suspension, a dance installation by Yoann Bourgeois (whose work Little Song premiered at NDT2 last November), performed at the Panthéon in Paris. The original installation was largely confined to one set piece, but the film offers different scenes and different installations – including one in which two dancers are tentatively moving furniture around on a teetering platform – with the addition of a pensive voice-over and classical music.

Translating a performance to the big screen can even offer a totally different viewing experience, as, according to Dekker, is the case in Clowns, available from March 26. Clowns is a piece Hofesh Shechter originally made for NDT1. ‘When I saw the original version at NDT, I was completely blown away. Since then, Shechter has bought back the rights of the piece and made the movie at Sadler’s Wells. It is such a different performance, it has a different feeling, a different colour pallette, a different focus. You almost wouldn’t recognize it!’

Another example can be found in Mobile Choreography, which will be available on Cinedans WEB from March 29. This film shows a choreography being recorded from as many different perspectives as possible from multiple smartphones.

Speaking of smartphones, Dekker definitely sees a rise in dance films shot using these devices. ‘These are high quality films. There is even a mobile phone dance film festival, Mobile Dance Festival in New York. It has become increasingly easier to make your own movies. People grow up with a camera always within reach. The urban scene especially has seen strong developments in mobile dance films. They know the power of framing, are very adept at conveying a story in moving images.’

Of course, there are other forms of dance films besides registrations. One example is dance documentaries. And as is they do with dance registrations, Dekker, Hannes and their team are looking for just that extra something. ‘We’re not looking for a bunch of talking heads telling us literally what they are doing. We were planning on screening a beautiful documentary, A Delicate Balance by Christine Chevarie-Lessard, about a dance school in France, told from the perspective of the young students. You see the eagerness of the students, but also their doubts. One of the male students is struggling. This is what he really wants, and he’s trying his hardest, but his body isn’t complying. How far will he get? How far should he go? These are questions he asks himself as well. Which requires more bravery: quitting, or sticking with it?’

The biggest segment in dance film are the dance shorts. ‘All the different styles you find in dance and in film are represented in the shorts. They can be abstract or performative, very personal or universal. Lately I’ve been seeing more and more shorts that are socially engaged. Films relating strongly to the world we live in now, the current climate and refugee crisis.’ Dekker explains her theory why dance film is such a popular vehicle for social commentary. ‘Dance can be very implicit in its expression of issues, whereas film makes it easy to distribute worldwide. Take the short The Kingdom of Men by Sham Kwan Yin, part of our Focus on Hong Kong program. Its contents are highly political, but portrayed in such a way that a censor would have trouble to find legal grounds to ban it.’

Which doesn’t mean dance can’t be explicit, as is the case with Zombies by Baloji, part of the Black Light Dance selection. ‘That short literally tells us: don’t be so dependent on your mobile phone, or you will turn into a zombie!’

The Dutch dance short climate is thriving. Dekker thinks the talent development programmes in the Netherlands have helped. ‘I think these have really boosted the medium. At Cinedans we have had five editions of Point Taken. Each edition, four dance makers and four choreographers were matched, which resulted in a total of twenty dance shorts. Dunja Jocic and Marinus Groothof were one of the first choreographer/director couples in the Point Taken project, and they just premiered their third collaboration. Boudewijn Koole and Jakob Ahlbom made a beautiful short called Off Ground together, which featured Louise LeCavalier. In the nineties there was a collaborative program with NTR and Fonds Podiumkunsten, where choreographers like Suzy Blok and Leineroebana made dance shorts. These kinds of projects can in turn inspire other people to make dance shorts themselves. There are also some foundations who are really supportive to the dance film cause, like the Amsterdamse Fonds voor de Podiumkunsten, Fonds21 and the Dutch Film Fund.’

While there seems to be a never-ending supply of dance shorts, full-length fiction features are less common. Last year’s International Film Festival in Rotterdam saw the world premiere of The Beast in the Jungle by Clara van Gool with former NDT-dancer Sarah Reynolds as one of the leads. But these instances are rare, not because of a lack of plans, but funding is scarce. ‘Ahlbom and Koole have been walking around for some time with plans for a feature length dance film. But even though people loved Off Ground, funders get squeamish when artists want money for a longer movie. Maybe they feel that financing a short is less of a risk. There is not much to lose. It took Clara ten years to get her movie made.’

Because its origins lie with Julidans, Cinedans always attracts a lot of dance lovers. But ever since Cinedans touched down at EYE, a steady stream of film enthusiasts sampling the festival has been added in the mix. ‘I think the inquisitiveness of the EYE audience really helps us. They are much more in the habit of just coming to EYE to see what’s on. I think it’s also really great for more experimental film makers to get a chance to get screened at a prestigious venue such as EYE. I was once asked by one of our funders why we didn’t go and find a more “adventurous” venue. Dance film is adventurous enough in itself!’