Since 1 June, the first cultural venues have slowly begun to open their doors again. But when exactly can a venue open? And how? We asked Marelie van Rongen, general director of Toneelschuur, the black box theatre and arthouse cinema in Haarlem.

Toneelschuur has been welcoming back audiences since 1 June. What has it been like so far?
It’s been great! It’s such a wonderful feeling to be able to entertain visitors again. Having the building largely stand idle for two and a half months just didn’t feel right. And the people who’ve come in these past two weeks were very happy as well. Mind you, it’s not all sunshine and lollipops, because we know that, financially, we can’t keep this up indefinitely.

What has the attendance rate been like?
Really good. Toneelschuur is both a theatre and a cinema. We’re screening nine movies a day, and Tuesdays to Saturdays we host live shows as well. All screenings and shows can admit up to thirty people under the Corona restrictions, so in theory, we can welcome about 250 people a day. We’re not reaching capacity, but people are certainly willing to come.

How did Toneelschuur prepare for the reopening under the strict Corona measures?
First we approached Joost Swarte, the Dutch cartoonist and graphic designer who was one of the original architects of Toneelschuur, to help figure out the aesthetics. He designed a playful diamond pattern of bright yellow lines on the floor to help people keep their distance. He also designed six infographics, which other institutions in Haarlem can also download and use for free in their own establishments.
We strongly encourage people to buy their tickets online – before all this, most of our visitors were used to booking tickets by phone – although when it’s quiet, you can still get a ticket at our box office. We also employ a very liberal cancellation policy. People have to feel free to cancel when they’re feeling a little under the weather.
To keep the number of staff on site manageable, many of the main staff members, from myself to our head of marketing and our technicians, also do most of the service tasks, from clean-up to making cappuccinos.

And inside the auditorium?
Until 1 June we can admit thirty people in our main auditorium. We’ve removed the seating and put in twenty small tables which can seat a maximum of two people each. We also installed a small bar where people can get their drinks – included in the price of admission – when they enter. This arrangement creates a welcoming ambience and ensures people don’t feel lost in a sea of empty chairs.

That sounds wonderful!
It is! It almost makes you wonder why we haven’t done this sooner, or more often. But remember: admission prices would have to be quadrupled to make this set-up work financially.

This month, Toneelschuur is showing two theatre productions: Sissi Boy by Steef de Jong and De Bezoeking by Het Volk (both running for two weeks). How Corona proof are these?
When we began programming we were still assuming we could only have thirty people inside the venue, including staff. We specifically looked for shows that had as few cast and crew members as possible and that would be a good fit for our café setting. Sissi Boy is a solo performance, De Bezoeking had to be rearranged a little, but not much. It’s a show that consists of four people, two of whom are sitting in their beds in a sanatorium for almost the entire duration of the play, while the other two move about.

How are the shows doing, attendance wise?
Both shows sold out almost immediately. Admittedly, thirty isn’t really very big number of seats to fill. We picked two shows that originally would have played here in May. They were sold out at the time, and we offered people who had booked a ticket for the original run the opportunity to order their tickets first.

How did you retain visibility during the time you were closed?
We experimented with online formats. For instance, we have a group of devoted young audience members, young ambassadors who we like to call ‘Ambas’ or ‘Schuurjongeren’, and during the lockdown they held Zoom-interviews with regular Toneelschuur visitors about their day-to-day lives. We discovered early on that our strength lies more in live work than in digital productions such as the ubiquitous online registrations, most of which I find hard to watch. The majority were never made with an audience in mind; they exist purely to provide a record for future reference. Some shows are better suited for video than others. For the final performance of Sissi Boy we did host a live streaming event, which turned out better than I expected. I do like the idea that you agree on a time and a place to watch something together. We had some very high-quality equipment at our disposal, on loan from our gracious neighbour Philharmonie Haarlem. We invited everyone who had pre-booked tickets for shows during the lockdown to watch the live stream. About two-hundred people tuned in that Friday – we removed the link immediately afterwards. Our main auditorium can hold 266 people, so that’s not a bad turnout. But it remains a costly venture. We could borrow the equipment for free, but I still had to hire two technicians to make the registration. If these same two hundred people were also willing to pay five euros to watch the performance, and we could divert some of these funds to the artists themselves, then we might consider doing this more regularly.

How will Toneelschuur proceed during and after the summer holidays?
Our film screenings will continue all summer. Before Corona, we never had any theatre productions in July and August. As fate would have it, this year we were in talks with Open Air Theatre Caprera in Bloemendaal for a co-production, Lost Tango. That show was cancelled, but Caprera has just received permission to re-open and host open-air performances for up to 250 people. This means we may be able to program some extra film and theatre shows during the summer after all. And we’ll be starting our indoor programme two weeks earlier than usual, at the beginning of September. For now, we’re holding on to our original programming from January. We’ve contacted all the artists who were booked at Toneelschuur between then and September with a detailed inventory of what we can offer, from the number of available seats to financial compensation. Starting from 1 July, our small auditorium can hold up to 36 people, our larger one 78. Granted, a maximum of 78 visitors isn’t much, but for artists who are just starting out, it’s not all that bad. Although it does depend on their current financial situation.

In what way?
At Toneelschuur we work with a system where artists get a guaranteed fee, regardless if there are three paying visitors or three-hundred. On top of that they also receive a percentage of the profits. That way, especially for beginning artists, the risk lies entirely with us. It’s a practice that’s becoming less common; theatres like to work with a system where artists receive a percentage per seat they fill – usually around eighty percent. If nobody shows up, that means the artist receives eighty percent of nothing. Here at the Toneelschuur we’re pretty unique because we’re also a cinema, which provides us with a pretty dependable revenue stream. It allows us to level out some of the overhead.
I’d really like to be able to keep going in this vein. Mind you, the standard fee isn’t high, and probably won’t cover all the daily expenses for a touring company, but most government-funded companies usually have a part of their subsidies earmarked for just these occasions. So this would cover those companies and artists who receive structural government funding.

Unfortunately, that still leaves a large group of artists without any structural financial support hanging.
Toneelschuur is a member of the association for black box theatre venues, the Vlakke Vloer Platform (VVP), and right now the VVP is looking for a way to make sure this most vulnerable group of performers doesn’t fall through the cracks. The fourteen members of VVP have made an inventory and we’re looking at 350 shows across theatres, from September to December alone. At the moment, we are working very hard to find additional funding so we can make up the difference and the artists won’t have to shoulder all the risk.

Toneelschuur also produces its own shows. Have there been any casualties there?
Sadly, there have. On 12 March, the day of the fateful press conference, we were just working on the final photo op for Het Zuiden, which would have been Olivier Diepenhorst’s final production for Toneelschuur. Then the lockdown happened and Het Zuiden never got its opening. The sets for that production stood in our main hall for at least six weeks as some kind of tragic monument for a lost time. We are currently looking at ways to give Het Zuiden its premiere after all, if we can manage to get all eight actors’ schedules lined up. Nina Spijkers was supposed to make Kasimir en Karoline. Her project never even reached the production stage. It’s doubtful if this one will ever see the light of day; her lead Joy Delima will be working with ITA full-time from next season. There has been one positive side-effect: we’ll probably be able to bring back Weg met Eddy Bellegeule by Eline Arbo, hailed by the NRC as one of the best productions of the season. We weren’t able to do it pre corona, because all four actors were booked solid. Now they have time.

Have rehearsals started at the studios again?
There have been some first encounters and preliminary talks with makers, but our studios will remain empty as long as the actors and dancers aren’t allowed to touch each other on stage. Physical contact is an important requirement for a lot of our productions. I really hope we’ll quickly follow in Belgium’s footsteps, where the performing arts have just received permission for contact-based performances from 1 July.

When the lockdown started, people who had bought tickets to shows were offered the possibility to donate their ticket to Toneelschuur. How many answered your call?
I think about sixty percent of those tickets were donated, which is really heart-warming! We have a very loyal audience. It’s great for the artists as well, since we were able to pass about three quarters of these donations on to them. At the same time, about forty percent of the tickets remained unsold. That amount is lost for ever. But it’s really touching to see how dear Toneelschuur is to many audience members. For most, it’s not just a venue, it’s a home. For our very first performance of Sissi Boy we welcomed back one of our most loyal visitors, a man who would normally visit Toneelschuur about 130 times a year. This was the first time in two and a half months that he had ventured outside.

Is there a future for theatre at a 1.5 meter distance?
For me personally, these live encounters between audience and artist are sacred. I don’t see a purely digital future for the theatre. To me, an encounter with thirty people is just as precious as one with one hundred and fifty. I think the first two weeks of Sissi Boy have proven that. But from a business point of view, it’s hell. You don’t want the theatre to become elitist. You want everyone to be able to afford the price of admission. That’s why I really want to keep offering discounts for people on tight budgets, like Stadspas, even though we probably won’t be able to prevent a slight overall raise in prices. Artistically and emotionally speaking it’s definitely worth it; financially this situation is unsustainable. 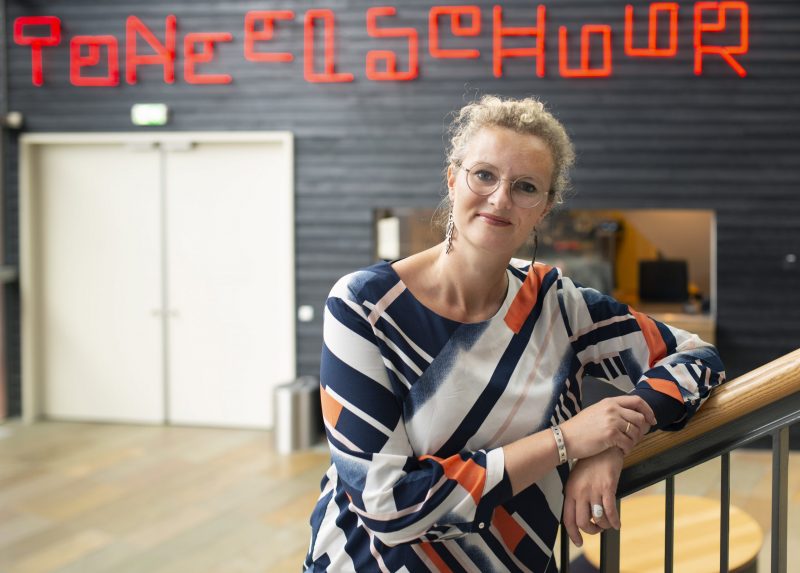