Seven solo-performances. Seven sites-de-resistance in Amsterdam Noord, places holding a certain connection with the cities’ libertarian past, when squatting to reclaim empty buildings was still a part of its underground culture. Seven spectators per tour. Five tours in one day. This one-day festival was Antidote’s – an Amsterdam-based laboratory for the self-organisation of (international) artists – response to the Covid-19 measures, aiming both at physical responsibility and mental healing.

Storytelling, mime, music, dance: a set of connecting moments in search of a “new intimacy”. I walked back home juggling my violently mixed feelings after experiencing three out of the seven solos on 20 June. I felt tenderness and gratitude for the frail rawness of the pop-up-like initiatives, but also a slight irritation about the foolhardy obsession with marketing it as something “new”. I felt kind of old, too.

Let’s call a spade a spade. What’s new about site-specific performances? Nothing. What’s new about one-on-one performances? Nothing. What’s new in devising performative experiences to intimately and individually connect with your audience – be there one or two-hundred people in the room? Nothing. Worshipping newness as a value felt very much at odds with the recycled aura of the productions on the programme, as well as with the history of the walls that happened to frame them. As for the performances, to hide behind the idea of novelty includes the risk of remaining shallow.

Take Elisa Zuppini’s Synthetic Disjunctions at NDSM. Placing a moving body in front of an industrial backdrop doesn’t make it a site-specific performance. Zuppini aimed to present a body as texture, looking for a sense of otherness in its becoming through movement in its given space. To work with a performing body as matter was famously researched by Odile Duboq’s Projet de la matière in the nineties. To have body and non-conventional spaces interact – indeed, awakening a sense of otherness in both – could be linked back to a myriad of initiatives from the sixties onward. But none of that happened here. Movement and willingness aside, a couple of things were regrettably off-putting. Zuppini’s indecisiveness when establishing eye-contact blurred her chosen point of departure, making it hard for me to engage with the idea of her becoming a bodily texture. Besides, her movement was not informed by the environment, and even when she ran away from me to broaden my perspective it felt like looking at a pre-created choreography stitched onto a new décor. As such, you just can’t win from the NDSM-warf: bright graffiti, crashing sounds and echo’s, humongous metal structures leaning on half fallen walls, dust. The space was far more interesting to look at, and I only felt intimacy in my own relationship to it, as one does not sit alone in places like this very often. 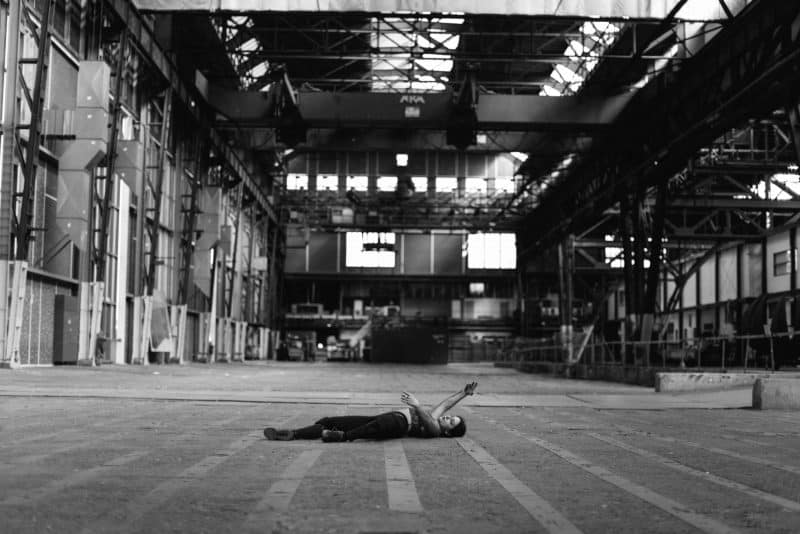 In Synthetic Mediations, community artist Pankaj Tiwari set up a more conventional frame for his encounter. Having me sit on the small podium of the Bildung, and limiting my view to a triangular patch of floor marked by two white, wooden panels, he started by chanting offstage in a deep voice and a language I could not understand. He walked in still singing, and after this introduction, he started a conversation. He asked me how I was doing, what my weekend had been like, and if I could think of places I visited, and of places I would love to visit in the future. I wrote them down on a piece of paper – so did he – and then we made paper planes matching the ones already hanging from the ceiling. The energy was kind and warm, as Tiwari established a feeling of togetherness pouring out of something we had in common: a memory of making paper planes, a childhood wish to ‘see places’. Thus, when he started telling me his story – about a child living in an underdeveloped rural area, running around flying paper planes on the landing strip of an airport that was promised, but never came; and on how he found out in Zurich that flying is actually “a bad thing” after he took an actual plane for the first time – he had already turned me into an active listener, a character even. His nemesis, perhaps? His last question didn’t fall into the void: “how do you think that boy felt, when his dreams to fly were shattered?” 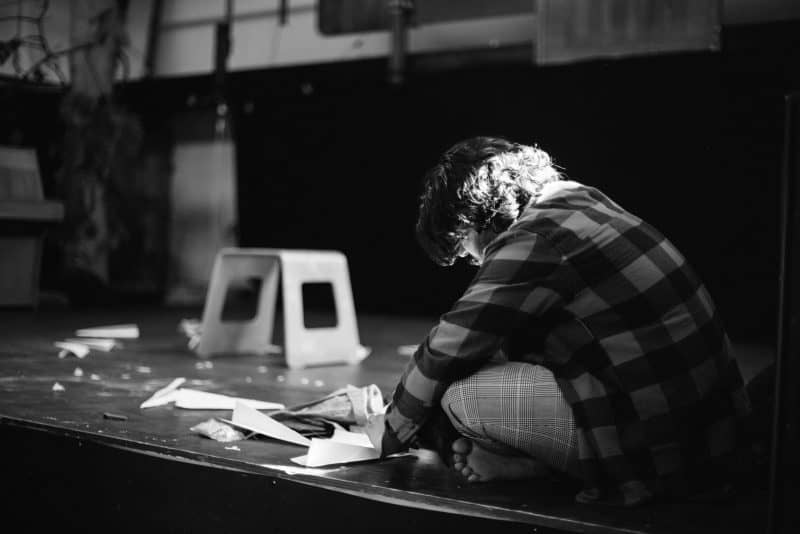 Our memory of the paper planes is not the same. Allow me to put my thoughts in context through the words of Johan Röckstrom, director of the Potsdam Institute for Climate Research, recently interviewed by the NRC: “We have to ask ourselves: what right do we have to emit ten times more CO2 than the average person living in the African continent? Wouldn’t it be fairer for you and me to go to zero now, and leave a little more room for those who have barely emitted anything historically and who are in dire need to climb the ladder of prosperity?”

Lastly, I saw Switched-off Beethoven by Akim Moisenkov. It took place in De Ruimte, another example of this Amsterdam that is slowly disappearing: an old traffic-tower turned into a gallery-café-theatre-feel-free-to-do-with-it-want-you-want-space. (Side-note: One of the big assets of Antidote were the spaces it gathered together. Wandering through them was enough to make the whole experience worthwhile). As for Moisenkov, he chose to introduce his performance by means of a recorded tape, played on a yellow, blue and red cassette player. On tape, he welcomed me, thanking me for attending and wishing me well – “may the world be with you”.

In the adjacent room, a sort of young neo-version of a druid awaited. Long-haired and bearded, his eyes closed, wrapped in a black cloth similar to the drapes covering the windows. Two rings with small blue led-lamps around his two ring fingers, and a black plastic gadget in his mouth. Cablework everywhere, several loudspeakers dating from the eighties and some table lamps set his stage. In front of him, on the floor, an open laptop and a looping device. After I had taken my seat, he pressed a button with his toe – the art of pressing play – and as he started to move, the rings and the apparatus in his mouth modulated the pre-recorded sounds to bring a version of Beethovens’ string quartet op.15 to life.

Purposely retro, Moisenkov combines digital media with gadgets dating from the last analogical era to create a musical moment originating halfway between recorded sound and live-performance. Different than a DJ, this neo-druid’s movements affect the sound, indeed play the music. And in his twitching and curving, his utter concentration supports the illusion established by his looks: that something magical is taking place. A technological conjuror, providing a synthesized listening experience to me and myself only. It was as odd as it was refreshing, and I left the room thinking of how, without the drapes and the nostalgia conjured up by the cassette player, the speakers and the lamps – continually switching on and off to add to the performative event – the whole thing would have definitely fallen flat. At least, it would have done so to me.