If things had gone according to plan, Monuments of Solitude would never have been made. It was an impromptu project, artistic director Conny Janssen tells us in her introductory talk to her company’s solo programme on Sunday 21 June at Huis Conny Janssen Danst.

They were just about to start rehearsals for the reprisal of the 2007 site-specific performance So Here We Are (which was set to play from 18 June to 12 July at the Van Nelle Fabriek for a total audience of nine thousand people) when Corona stopped everything in its tracks. While most of the people in the office could keep themselves busy during the lock-down, finally finishing up on all the tasks they hadn’t gotten around to doing since the company’s move to its new home at Dolf Henkesplein in Rotterdam last October, it left all the dancers in Conny Janssen Danst empty-handed.

Conny Janssen is nothing if not resourceful: she set her ten dancers to work. They each had to choreograph a solo, reflecting on this current situation of enforced solitude. The end result is Monuments of Solitude, which consists of nine solos (one of the dancers, Maud Huizing, couldn’t participate due to an injury), split up into two programmes (A and B). To adhere to the 1.5 meter distancing rule, and to avoid cross-contamination, each dancer was assigned his or her own square in one of the two studios. To enforce the feeling of solitude even further, no two dancers were allowed to rehearse in the same space at the same time.

The dancers in Conny Janssen’s company are always expected to contribute their own ideas and movements to projects, but suddenly having to make something on your own, by yourself, can be pretty daunting. It’s an interesting experiment, which does pay off, both artistically and aesthetically.

For Programme B we start at the main studio for the first three solos. Fourteen chairs are positioned in the middle of the studio, each at 1.5 meter distance of each other. It feels as if I am sitting down for a school test, even though the writing desks are missing. After each solo, the audience members have to turn their chairs 180 degrees to see the next.

Programme B contains five solos, each with a slightly different mood and feel. The first, Yanaika Holle’s Cepa, has a contemplative mood. She starts folded up in a fetal position – in the accompanying text in the brochure she mentions the symbolism of an onion – to be slowly unfolded (or peeled back) in the following moments.

While Cepa deals with the search for connection, with Holle embracing empty space as if it was an actual person, Hiro Murata’s In the Shell is one of voluntary withdrawal. For the entire duration of his solo, Murata keeps his hands in his pockets, and his gaze averted. It is a self-imposed isolation, a conscious choice not to engage with the world outside. 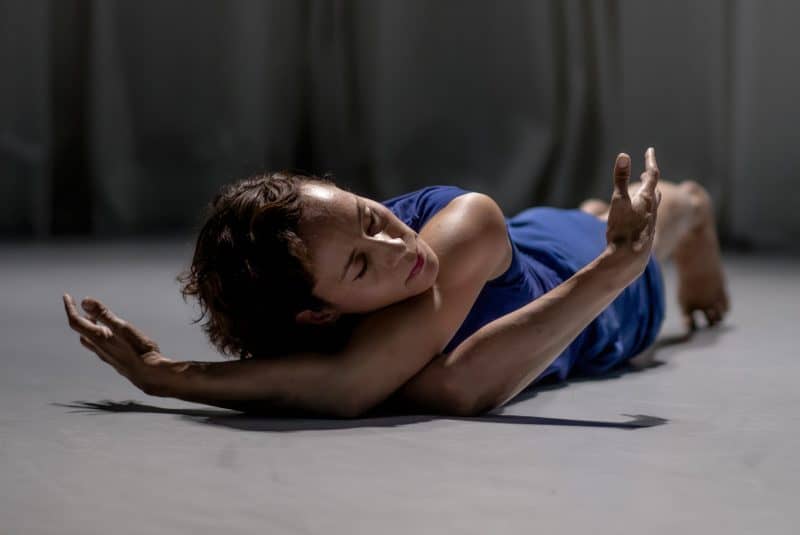 ‘It means no worries’ by Adi Amit is the most whimsical and playful of the five solos. Amit uses her body as a landscape, which her hands go exploring. A large part of the soundtrack consists of audio of her young daughter babbling happily about Lion King’s Hakuna Matata (“…it means no worries…”).

We then move on to the smaller studio, for the final two solos. Watching it Unfold by Youp Scheffer seems to be as much about the creation process as about the lockdown. Scheffer’s movements at the beginning are unsure and jittery. His jacket hangs loosely from his shoulders as if it were a second skin he just doesn’t quite know what to do with. The solo is about finding confidence in yourself, and feeling secure in just not knowing.

Cotton Mind by Remy Tilburg is all about confidence and feeling comfortable with your body and with yourself. I could probably watch an hour of Tilburg just rhythmically moving his shoulder blades to Debussy’s Clair the Lune. All the time poised and in control, at ease and at peace. 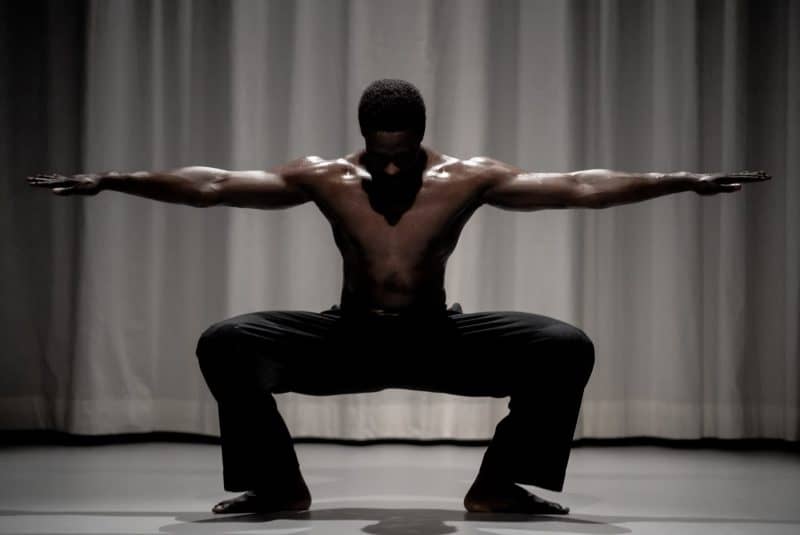