Business director Zuiderstrandtheater Leontien Wiering: “The collaboration between theatres has been stronger than ever during this crisis”

From June 1, the first cultural venues have started opening their doors again. But when exactly can a theatre open? And how? We asked Leontien Wiering, business director of Zuiderstrandtheater and Nieuwe Kerk (and of the future Residence for Performing Arts Amare) in The Hague.

Since 1 June certain cultural venues have already opened their doors, but Zuiderstrandtheater and Nieuwe Kerk are still closed to the general public. What prompted this decision?
We’re closed as far as regular concerts and performances are concerned, but we’re not completely shut down. A couple of nights a week we play host to ZST Live, a temporary online concert series streamed live from the Havenfoyer in Zuiderstrandtheater. Over the coming weeks we will also be facilitating a number of school musicals, which would normally have taken place in school auditoria or school gyms, but couldn’t, because of the Corona restrictions.
We realized early on that we really wanted to take the time to adequately prepare. There was a lot to sort out: what can and can’t be done? How can we welcome our guests in a safe and adequate way? What can we offer on stage within the current guidelines without sacrificing quality? This last one was an important issue, and our two main partners, Residentie Orkest The Hague and Nederlands Dans Theater, have also needed time to wrestle with it. That’s why we decided not to start until 1 September.

You stand on your website that 30 visitors, the maximum capacity starting 1 June, was just too small a number to stage regular shows.
At Zuiderstrandtheater we don’t have a smaller auditorium. We only have the big one, which holds 1000 seats. Many of the venues that have already opened their doors to the general public either have their own in-house company, or their main focus is on disciplines that can adapt more easily to the current Corona measures. For dance, these past few months have been really complicated, especially with the 1.5 meter distancing rule between dancers.
From 1 September we can accommodate up to 204 people in our auditorium at Zuiderstrandtheater, which gives us an occupancy rate of about twenty percent. For Nieuwe Kerk the occupancy rate can be slightly higher (118 people for 500 seats), because we can move the seats around. At Zuiderstrandtheater the seating is set.

How did you implement the distancing measures at Zuiderstrandtheater?
Some rows will remain empty during the performance, others will have special coverings. We’ve also placed an order for special tables to be placed between the seats, where our guests can put their drinks (normally people wouldn’t be allowed to take their drinks inside). Upon entry, audiences will be divided into four groups, who will enter and exit the auditorium through four separate entry ways. And we’ll be working with multiple shifts, so as to be able to reach a bigger audience.
The first half of the upcoming season we’ll be tweaking the formula, to see how we can optimize the audience’s experience in compliance with safety regulations. One of the ways we’ll be doing this is through a series called ‘Toneel op Toneel’ (stage on stage), where we will be experimenting with the set-up. Perhaps the audience will be walking around, or they can be seated on the stage. Choreographers Jérôme Meyer and Isabelle Chaffaud already have some experience with involving their audience and interacting with it. The groups of guests will probably be smaller as well, maybe a hundred people at a time.

What will the programme look like from 1 September?
At the moment music takes up the lion’s share. But there will certainly be dance as well, with Amos Ben-Tal, Meyer/Chaffaud, De Dutch Don’t Dance Division and others. NDT will certainly be present. Autumn is always a busy season for them. The old dates still stand, and they’ve just asked us for more. Because some of the other shows have been withdrawn, we happily complied. We’re finalizing the schedule for the first half of next season as we speak. It will probably go online in two weeks.

Zuiderstrandtheater is a member of branch organization VSCD (the Dutch Association of Theatres and Concert Halls); you yourself are a member of the board. What has the collaboration between the cultural venues been like?
I think the collaboration between theatres has been stronger than ever during this crisis. VSCD has put together a Corona protocol, in dialogue with the Ministry of Health, Welfare and Sports, which each theatre then adapted to its own venue. But we’ve also had intensive conversations with producers and companies to decide how to settle all the financial losses we all suffered during the lockdown. Together with Vlakke Vloer Platform (VVP, the association of black box theatres) and the producer associations (NAPK, VvNO and VVTP) we established an independent ‘Committee of Wise Men’ to look into who should shoulder which burden. In the end, the committee decided on a formula, in which each theatre offers producers and companies a certain amount of compensation, excepting the companies in the BIS (Basisinfrastructuur), who already get their own form of compensation from the state. But we still have some tough decisions to make for the future. What will we do if there’s a second lockdown? Who will shoulder the burden then?

You are also in the middle of a new project: Amare, the new Residence of Performance Arts in The Hague, which is set to open in September 2021. Has Corona had any consequences there?
Construction has been one of the few industries that hasn’t been idle these past few months. In a way, we’ve been busier than ever. But we did ask ourselves: do we make the building more Corona proof, for instance by installing fewer seats? In the end, we decided against it. Amare is supposed to be a cultural hub, a place where lots of people can come together.
Our main concern is that all the business models for Amare are based on the assumption that we can welcome large amounts of people – Amare will also be used as an international conference centre. We’re really counting on conferences having started up by then. But bear in mind, the opening is still more than a year away.

Is there a future for culture at 1.5 meter distance?
That is quite a philosophical question! I think there will always be room for culture. I think the collective experience, live, will always have great value. But I can imagine that we’ll be seeing more hybrid versions as well, with a greater reliance on online platforms and formats. We will certainly take into account our experiences this coming fall. Perhaps we’ll keep offering multiple ‘shifts’ a night at Amare, or offer guests the added option to watch a live performance from home.
The current crisis challenges us all to find creative solutions, which, I think, is a good thing, even though it was born out of necessity. We, for one, are going to look really hard at our current programming system, which is pretty rigid. Our whole schedule is usually booked solid two years in advance. Perhaps we should be more flexible in future and leave more room to chance. 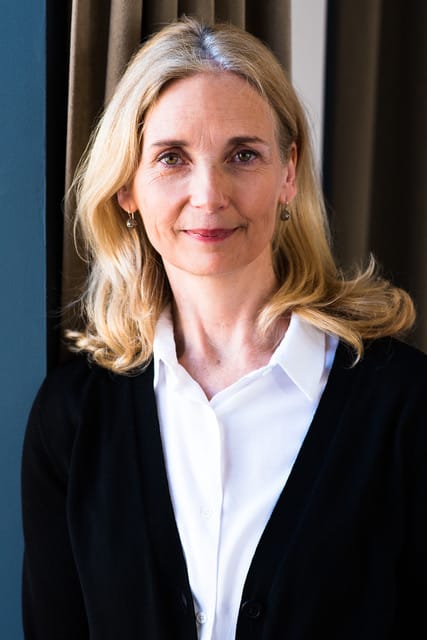 Artistic coordinator BAU Eva Villanueva: "Many companies have become aware of the weak position of freelancers and share their concerns"