Artistic coordinator BAU Eva Villanueva: “Many companies have become aware of the weak position of freelancers and share their concerns”

Two months of (artistic) lockdown have placed choreographers and dancers in a precarious position. In a dynamic field that is usually centred on live action, urgent questions have arisen regarding working for the stage. Movement Exposed talked to Eva Villanueva, one of the founders of BAU and its artistic coordinator.

BAU is an Amsterdam-based organization for artistic development and innovation within the performing arts, with a special focus on independent dance and performance. Its efforts are geared towards professionalizing and strengthening the field; it acts as a representative for a wide group of independent makers and improves their working conditions and future prospects.

You are making sure independent freelancers are represented in the debate about institutional organization and cultural policy. Where do these talks take place, and what have you experienced?
There are several initiatives within dance and performance that discuss political issues and policymaking. On a national level, there’s the NAPK that represents the producers. Most members are publicly funded. The contribution fee is quite high, which excludes independent makers. Then in Amsterdam there’s the Dans en Theater Overleg (DATHO), where all the structurally subsidized producers in dance and theatre meet. Here, too, members pay a contribution.

Although the producing companies all work with them, freelancers’ issues aren’t really addressed at those meetings. And it’s not on purpose, it’s who’s at the table. Theatre directors, financial managers, and artistic directors come together to share information and expertise and discuss topics related to their organizations, so to companies with structural government funding. Topics affecting independent makers are less likely to be discussed. Which is logical if the majority is not concerned by these issues. But it’s been very valuable to kindle an awareness of each other’s practices. And things are certainly changing for the better. Many companies have become aware of the weak position of freelancers and share their concerns.

Were any freelancers present at these meetings?
No, they weren’t taking part. I went there to represent BAU, and because we were not structurally subsidized it took some time to get in. We explained how it was extremely necessary for us to join, to make sure the freelance and independent voices were represented. Eventually, they understood and we received a two-year grant allowing us a seat at the table on behalf of a large group.

Once I was in, I realized it’s a meeting with 20 people. If an issue related to freelancing is addressed, it’s hard to bring things into action because I’m alone. Now with Corona, one thing that’s functioning quite well is that we’re connected to the Creatieve Coalitie (Creative Coalition), an alliance that represents 40 platforms and trade unions for freelancers from different disciplines, such as ACT for actors, De Kunstenbond and platforms for freelancing musicians, visual arts, journalists, etc.

Why do you think dancers and performers are not part of such initiatives?
Perhaps no-one had thought of it before BAU started to strive for representation. Another reason could be that most meetings are in Dutch and many in dance and performance don’t speak the language. We’d been in contact with de Kunstenbond for a few years, I could call them with questions but it’s a big organization and the issues weren’t as urgent as now. It’s been really great to exchange information during this period.

Almost unawares the system has created a policy based on the needs of structurally subsidized institutions. Some of the criteria for government funding are based on the information of the trade associations, which then become directives for a fund like FPK. An example would be the general average rehearsal time. For an independent maker without a fixed crew, it usually takes much longer. In countries like Belgium or Germany there’s more time for rehearsing and research, there’s more understanding of the need to figure out what kind of performance you’re making. Independent makers’ work is often more experimental, which takes time. The conditions and requirements in the applications don’t match with these working practices. But it’s also simply a matter of money, the public funds don’t have sufficient budgets.

How do you see the position of the independent artist now?
It’s very weak in comparison to people who work for a company. It’s not the fault of the cultural field. It should be clear to the government and the minister that it’s time for a basic income.

Festivals and companies understand the freelancers’ problems since they have a lot of self-employed people working for them. Despite the continued subsidies during the first few months since Corona, their income from ticket sales has plummeted. And often that’s more than what they get in subsidies. Now, their freelancers still need to be paid, so many are paying half of the fees, covering the rehearsal period but not the performances. Of course, that’s not enough. There’s the TOZO, but the problem with that is that it’s just the minimum income. Families with self-employed people only get one TOZO, but if you have children and it’s a household based on an income of two people, that’s unfair.

What new ways of surviving do you see?
It’s very difficult…The only thing I can do now is to keep fighting with the Creatieve Coalitie to get attention and talk to political parties. Kunsten ‘92 is working very hard. The left-wing parties understand our plight, but they’re outnumbered in parliament so they have less power. Many right-wing parties care less about the arts and just see them as a hobby. In their original statement, the new provincial government in Brabant dropped the concept of culture/art, heaping it with leisure into a unified category ‘Vrije tijd’ (leisure). They intend to bring the funding for it down to EUR 0.00 by 2023. It shows how they fail to see the value. It adds to this framing of the arts as lazy and dependent on public funding. I was, and still am, hoping these Corona times will wake people up but I am afraid we will revert to the old system as soon as the situation passes.

Don’t you think there will be a big backlash that will prevent us going back to what was the norm?
In general, life was not normal with our neoliberal system relying on multinationals. KLM, for example: the general public doesn’t necessarily realize how much government funding goes to them. And their shareholders. There is a generalized perception that the arts are the worst ‘subsidieslurpers’. Despite our field actually contributing more to the national revenue.

How should we prepare for the future?
We should stick together, be strong together, and communicate better. This is the first time we’ve come up with clear numbers to show what we contribute to the economy and that’s the only way to communicate with the ministry. A CBS research about 2015 showed culture and media contributed 25,5 billion euros to the Dutch economy (BBP), that’s 3,7%. Only a little behind the construction industry (4.1%), and twice as much as agriculture, foresting and fishing (1,6%). It also means 4,5% of the national employment.*
We were always talking about the emotional value of the arts, which is real and more important, but it’s not something that reaches them. Numbers are effective.We should do much more research but they are expensive and the cultural field doesn’t have the means.

We have to devise a really good marketing campaign for all disciplines combined. We are trying to do that with the Creatieve Coalitie, to see if we can reach more than our in-crowd. For a decade now, certain members of parliament have been saying that what artists do is no more than a hobby. We haven’t been taken seriously. Of course, if politicians keep repeating that, people start to believe it. If you look at how often the Defense ministry is on the news, they celebrate an array of small facts. That’s because they have a whole marketing department with a big subsidy working on their promotion. Interestingly enough, they don’t talk about subsidies; they talk about investment. We should start doing the same in our field, so people stop having the idea that we are ‘just’ getting money. That’s good marketing. But a big coordinated campaign is also incredibly expensive, it seems unfair to spend that money when artists make so little.

How do you, as BAU, see the future?
We are very necessary, we are the only ones representing independent dance and performance artists in The Netherlands.

The minister of culture is fighting for more money for the arts but she started with the big institutions. The opposition has handed in a motion to get an additional 700 million euros to help the smaller organizations. There’s this strange idea that if the big institutions get money, that money will flow to the freelancers, which is not true: the numbers who work for the big institutions are relatively small.
The Dutch Performing Arts Fund (FPK), which funds many more independent makers, has had to accept a 8.6 million euro  cut from its already modest budget.**

On top of this came the Corona crisis which created even more distance between the institutions and the freelance artists. Because the freelancers have been treated so badly…and it’s not the companies’ fault, they are also stuck, what can they do if they don’t have any income? We all depend on each other, there is too little support in general, for both groups.

You cannot repair it now. We used to have a well-organized art field with very high standards and world renowned ensembles. But was taken away by the disrespect of the major cuts by Zijlstra in 2011. The only way this can be solved is if we have a left-wing ministry. 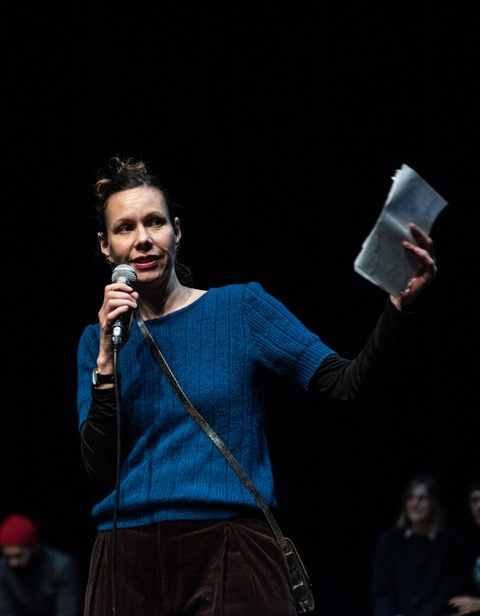 Business director Zuiderstrandtheater Leontien Wiering: "The collaboration between theatres has been stronger than ever during this crisis"