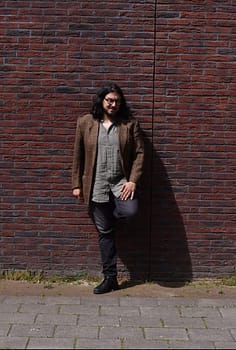 Storyteller Sahand Sahebdivani’s voice is soft and welcoming. He speaks fast, swiftly colouring every answer with personal anecdotes, and detours without losing the thread. We meet – live! – in a café in the centre of Amsterdam to talk about the Mezrab, the House of Stories he started in 2004, today a referent for the city’s “third culture kids”. From Covid-19, our conversation spreads to the essential dimensions of his drive: the appreciation of storytelling as an artform, and the value of the social and inclusive gathering it allows for. Mezrab has been nominated for the Amsterdamse Cultuurprijs 2020, given yearly by the municipal cultural fund AFK.

Third culture kids. Let’s start with that.
Mezrab is dedicated to storytelling and, to a lesser extent, to world music. But it’s also about how these are combined in a sense of gathering that translates beyond language barriers. That’s why I mention the third culture kids, who combine roots and cultures and go beyond those of their parents or home country. They feel comfortable in these settings, and recognize that in each other.

The way the venue is set up is part of the artform.
Yes, it’s about a sense of intimacy and warmth that comes, first of all, from what was shown to me as a child. I call it Persian, but it’s actually a very global phenomenon, let’s call it from the global south. Gathering people around you, whatever the excuse, to share food and music and songs and poetry. What my parents very naturally did within their Persian community I wanted to achieve amongst my friends: Dutch, Irish, Persian, Serbian, a mix of cultures that is part of this city’s reality.

The presence of your parents is essential to the Mezrab. Were they organically involved in it, or was their involvement part of the plan?
When things go well, I can always look back and tell you it was planned. The reality, however, is I couldn’t afford anyone when I started. Still, I needed people to help me run the place. I found out about this law allowing relatives to work for free – meant for kids who help their parents after school. Back then, my parents had a laundry service. Both highly educated migrants, they did it out of necessity, because when they arrived in this country, washing and cleaning was all they were allowed to do. It wasn’t inspiring, the detergents were screwing up their lungs… I really didn’t want them to do that for the rest of their lives. So I asked the city council if ‘relatives’ could also apply to one’s parents, and it could! It was perfect: my father cooked, my mother sang for the guests, I told stories… That lovely family atmosphere kind of transferred. It came out of necessity, but necessity often shows us what’s instrumental.

You grew up in that now bygone, countercultural Amsterdam of the eighties. Did any of that transfer to Mezrab, too?
The first people who supported my politically activist parents were people from the squatting community. My formative years were drenched in that Amsterdam, but by the time I started going out, that culture had died. Still, I understood it was part of the city’s DNA, and therefore mine. Mezrab comes from that countercultural instinct too, and that’s what makes it quintessentially thirdculture: it’s where my twin roots meet, and create something that could only come out of that meeting.

What’s the value of such a space in the present context?
For one thing, the fact that almost everything we do is in English comes from a sense of inclusion. There are large numbers of migrants, international students, expats, who wish to enjoy what’s going on in this city beyond a walk in the red-light district. Then there’s the inclusiveness of the mise en scene. The storytelling, an artform with a naturally low threshold for participation, happens on ground level and people stand or sit around it as much as possible. This takes away the hierarchy and makes it easier for people to step in. At Mezrab the gezelligheid comes from the interaction; you feel co-responsible for what is happening.

OK. A space for sharing in and of the moment. And then came Corona. How did you react to it?
Well, very intuitively. If the lockdown was announced on a Thursday, I went there anyway on the Friday. I couldn’t not go to the Mezrab on a Storytelling night! A good friend and my brother came along, and as we were sitting there getting drunk I took the phone and made a selfie video of the three of us. I pretended to host, we sang a couple of songs, that was it. And reactions came in from all over! We realized there’s a lot of people for whom the Amsterdam experience is tied to the time they spent at Mezrab, even if they don’t live in the city anymore.

After that, we decided to set up a weekly stream and hit on a few crucial things on the go. For instance, the role of our flamboyant communication officer, Joseph. He creates a constant feedback loop with the audience that’s very important when it comes to storytelling. What I do, in my art, is breaking the fourth wall to give the feeling that we are doing it together. And in the stream, this was only possible with Joseph’s presence.

At the same time, I have to say that even if all of this is fun, it’s not sustainable. During lockdown we gathered donations to cover a third of the rent. While that is certainly something, looking at a future in a 1.5m-society, I honestly don’t know how long we can survive.

If you allow yourself to dream, and the normal normal could come back soon, which aspects of this experience would you keep?
We’ve already decided that we want to keep on doing the streams at least once a month.

During Oerol’s Imaginary Island we tried something else. Together with oneseconds collective we created a virtual, interactive experience: in a live-feed, a camera followed an actor reacting to my telling of his story. At set times, the audience could vote on how the story should progress. I found the audience’s influence on the narrative quite limited and easy to manipulate, but I think if someone were to take this concept and run for it, it would be great to get to higher level of freedom, where storyteller, actor and cameraman became such a tight team that you could trust them to react to any input…

The live aspect of the stream would become more apparent…
Exactly. Why do I tell stories live? Because the audience sees and feels that I’m being influenced by them all the time. And this is lost in a livestream. In a story your choice of words, how quickly you rush through them, the intimacy you create; it’s all dependent on the moment and changes together with the audience.

Do you see Mezrab’s nomination for the Cultuurprijs also as recognition for the art of storytelling?
I’ve been a missionary for the appreciation of stories for a long time; I still am. But at some point, I thought, people would grow out of the Mezrab and start their own storytelling projects. That hasn’t happened to the point that I would’ve wanted. On the other hand, I do see we’ve brought other things to the table, that have proven the value of Mezrab for the city. It’s storytelling in combination with that very basic and humanistic way of sharing a space.

What is your mission with storytelling?
You don’t want your artform to be a hype. When you’re involved in artforms on the margins of collective consciousness, too often it’s not the content of what you do that’s questioned, but the form itself. When you make a film, people discuss if it was good or bad, but if you tell stories, they first ask why. Why do you tell stories? Films are beyond that, but storytelling is not.

The labels that circumscribe our collective understanding of film, theatre, or dance can also be limiting, certainly when you try to create a shared, open space like the one you define for Mezrab. How do you navigate that line?
I get what you mean, but the fact that the label exists, if only for you to fight against it, can give a very creative, revolutionary energy. In storytelling there isn’t even the thing you don’t agree with, it’s all kind of in the mud. Which is fine, but…

Doesn’t that have a value in itself?
I find myself operating within two competing systems, and they kind of compromise each other. One is seeing storytelling as a social endeavour, which is something I can very much get behind. But at the same time, I’m a storyteller as an artist, and in that capacity there’s a need for methodology, curricula, links to certain languages and schools of thought. Certain aspects of this form are outgrowing the living room setting, not to invalidate it, but as a separate practice. It’s this artform that I feel deserves more appreciation.