Dancer and choreographer Cherish Menzo: “The anti-racism movement is not just about one issue, there are many issues and they’re layered”

Two months of (artistic) lockdown have brought choreographers and dancers to a precarious position. In a dynamic field that is usually centered on live action, urgent questions have arisen around working for the stage. Movement Exposed talked to Cherish Menzo, multifaceted dancer and choreographer. 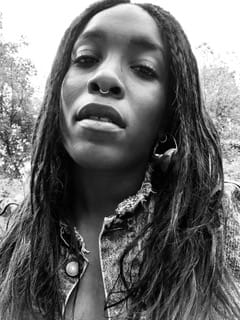 How have you experienced the lockdown?
It made me feel so stuck, I couldn’t move as freely as I wanted, I couldn’t be near my family, which in times like these becomes super important. It made me think about the notion of home, and where home is for me. It was confronting.

I was supposed to start the tour of JEZEBEL in March, but all the shows were cancelled or postponed. And all my rehearsals for Jan Martens’ new production, too. At first, I didn’t mind slowing down, and I felt no need to create work based on this situation. I’m in a very privileged position, my performances were rescheduled to this autumn. I still have work waiting for me, it’s not as if I have no perspective – if all goes well, that is.

What would you say are issues that have come up during the shutdown of the theatres?
We Are Public has this new project, called the In Art We Trust Fund. They select 15 artists every month and offer them financial support for either existing projects or new ones. When they called me, it felt great to be selected, but I felt a little strange about the financial help. I thought of my colleagues, all hard-working independent artists. Some receive support, but many didn’t. I feel responsible for their visibility, too. I see them and appreciate their hard work. I know their situation; I’ve also made art out of a great need without any financial support.
It’s a tough world for artists. This is our job. It’s a real job, but it almost feels like what we do is just arts and crafts – it’s cute, but not really necessary right now. How can we stress the value of the performing arts in times like these? What are our platforms for doing so? How can we come together? The corona situation has brought up lots of questions around this issue. And it’s not about getting pity, it is about equality. I have the opportunity to collaborate with more than one platform to create my work. Working with different people, not being dependent on a single structure gave me a sense of security during the crisis.

Then, unequal opportunities is one issue that has come more to the fore. Would you say social values are becoming more pronounced?
As excruciating as it is, being a person of colour, I exist within a system where I’ve almost become comfortable with not fully being a part of it. Or with always having to fight or making up excuses. For instance, I was asked to replace someone in a show. The choreographer was looking for me and the lights went off, and when they came back on, he jokingly said “Ah Cherish, I didn’t see you there”. All my colleagues looked at him disapprovingly and made it clear they didn’t think this was OK. But still I reverted to a deeply ingrained mechanism: I tried to make the situation less hard for him by joking back. By doing so, I implicitly help maintain a system that is ignorant, oppressive and harmful.

I haven’t always felt so strongly about it, I think because a lot of us are taught that the more you have to fight for your place, the stronger you come out of it. There is this general attitude reinforced, in school for instance, but also growing up as a person of colour, where it’s almost expected of you to fight hard. It’s normalised.

Before, I didn’t see injustice, I just saw ignorance and didn’t want to deal with it. The corona crisis with its lockdown has helped me and many others find our voices. It’s a bigger dialogue now. We don’t have to fall into the trap of positive discrimination. It’s not necessary and it only creates more victims. Everyone working in this field needs to join this conversation to understand. Do we feel a need for diversity and inclusion, or is it an obligation?

After the Black Lives Matters protest, I was wary of the way the production houses and platforms for whom I work would react. What does it truly mean when they say something on social media? Taking a stance by signing a petition or posting on social media, is easy. The anti-racism movement is not just about one issue, there are many issues and they’re layered. And they should all be addressed.

Do you feel that the movement gained momentum because of the COVID-imposed measures?
I think the quarantine helped. We all decided to come together without knowing it would be such a massive event. We’re taking a stand at a critical point in time. Had we not been so constrained, the protest may have been more diluted.

The protest and the primary decisions for fundings happened almost at the same time. How did that inform and affect the conversations around you?
I’ve been having exchanges with people about these topics in relation to funding and arts policies. It’s quite delicate because there are people of colour working in production houses, so there is the question if they are helping to maintain institutions that are not culturally diverse enough. People have been talking about diversity for years and yet we’re still not really tackling it. In funding policies the word urban now seems a synonym for inclusivity; I think it’s shocking that in 2020 we’re still thinking like this. We have to address the inequalities now. We need to take risks in order to grow. It doesn’t mean that now there should be a person of colour on every board; it would be great if whoever has power is informed and educated, has empathy, and is understanding towards the issues.

As a black maker, I wonder if it is the climate in the art scene that makes me create work in which I question this political body. If it weren’t such a topic, would I still be so concerned with it? When I first started, it was the first thing I tried to move away from. Because I thought if I used that, it would be what was expected of me and my black body. I ended up fighting it too much and trying to make “Western contemporary” works. And even then, in a review, someone saw Venus or  Serena Williams, while I was working so hard not to be associated with the stereotype of my body.

Where, when, and how do you think the whole issue accomodating to discrimination starts?
When I think about my time at school I realise a massive change is needed there. We navigate the information we are given there to enter the work field. And I felt systemic discrimination and oppression during this process. I didn’t receive my propaedeuse certificate after my first year, not because of my grades but because I was too polite. I had it then and still feel it now, it’s a cultural thing, it’s how I have been brought up by my parents. I was always taught to be polite and modest and not to be too loud, to make sure I could blend into the crowd. I felt that my teachers expected me to be an angry black woman. That is a cliché that stereotypes me and whether applied consciously or not, creates false expectations. It has to change.

Dancer and choreographer Christian Guerematchi:"We need to be heard and ideally in an intersectional way, so we also appreciate what we have here, and the possibility to talk about it"