Dancer and choreographer Christian Guerematchi:”We need to be heard and ideally in an intersectional way, so we also appreciate what we have here, and the possibility to talk about it”

Christian Guerematchi is a dancer and choreographer from Slovenia. Living and working in The Netherlands since 2006, he creates works about black bodies and social constructions. Guerematchi talks about the urgency of social movements and the shifts he has noticed during recent months. 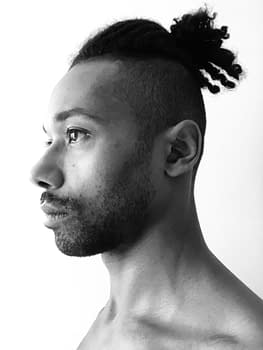 How did your position shift as an independent artist during this COVID-19 quarantine? What has come to the surface?

I have mixed feelings. I’ve been working on a project about black identity and the black body, for which I received a subsidy from AFK right at the beginning of the quarantine. We were supposed to perform at Slate black artists which got canceled, but we’ll catch up. April-May was a very heavy period with me immersed in my topic, and then the Black Lives Matter movement gained such momentum and the protest gathered thousands of people. The response to the events since the live streaming of George Floyd’s funeral was overwhelming. It felt like everything was connected. I had the money to work on a topic that now became trendy. What to do with it? I was asking myself, if another lockdown comes, how will it affect our situation? Will our issue be forgotten if another subject comes along?
Since the lockdown has been lifted, I’ve also reflected on how good this period was. People have become sensitized to their own bodies and behaviours. I felt it myself; everything was mirrored in my body, my own behavior and anger, other aspects that constitute my character. Now, I can see how I was still stressing myself out despite everything around me standing still. The rush of everyday life leaves us no time for acknowledging troublesome issues. It doesn’t allow us to look deeper, and this time of quietness has allowed people to think about what they have been doing and how they were doing it. Why so fast? Why so much? Why so ugly towards each other? It’s not over, it’s an ongoing process that might get clearer once it’s behind us.

The black body is a recurrent topic in your work. The Black Lives Matter movement has gained momentum during these past few months. How has that resonated with you?

It had a positive effect on my work. The Black Lives Matter movement has become more visible during the quarantine. People had the time and the willingness to act. Without this specific context, it would have been just another protest.

While working on my piece we talked a good deal about psychology, and it meant I had to speak about issues like my childhood. I was born in a white society and culture. Through the years, I have grown more confident to speak about this past and to present my views on topics like socialism and colonialism. I’m using this white side of me in my work with more confidence. In my previous project, I researched self-hate and self-love. They are the extremes that shape our identities. For instance, the way I know white identity is that I exist on this threshold, where I’m not seen as black, but brown. In Slovenia I was associated with the Gypsies and seen as black, but in Africa I’m considered white – they’d scream at me: “white woman” (because of my hair). So it depends on where you are. We’ve been talking about racism for ages and we have to realize there’s more to it than just a single narrative. It’s not just slavery, it’s also identity, it’s power structures, it’s whiteness. It’s a layered and complex subject.

For me, it all started with the riots in the USA during the 1990s, after Rodney King was beaten up by the Los Angeles police. I watched the coverage on TV at home, where I had no representation of people of my colour besides Bill Cosby, Michael Jackson, and a few people in the movies like Eddie Murphy. That was when I first realized: there is this universally felt anger, and I feel it too, and I have a problem with the white society I live in.
This was the beginning of a slowly continuing shift. For instance, Barack Obama changed the norm of how I perceive people in general, black or white. He caused that change simply by being the only person of colour occupying such a position of power. I couldn’t think of anything or anyone equal to what he represented, in such a powerful country in modern history. It was another step towards thinking, “yes, it’s OK, it’s good that I am alive”. I bring that into my work. It’s part of the process during all these years of trying to articulate myself. My position is a difficult one; people would call me “Bounty”, black on the outside, white on the inside.

In Slovenia it was one kind of life: I was the exception. Then, at 25, I came to the Netherlands because I was longing for people I could identify with. But it soon became apparent that colonial structures have created a certain narrative, and I try to address that in my work. I always say I am Slovenian; I was born in Yugoslavia, we were Socialists. That’s a decolonized narrative: Yugoslavia was actually working with the independent nations in Africa. Even though my country has changed, with nationalism skyrocketing and huge racism and discrimination against refugees and foreigners, it still carries a story that’s very valuable today. A narrative that bridges rather than divides. By contrast, colonial stories don’t aim to bridge the gap. We are trying to work with this divisive narrative and fix it, but the scars and divides are there, imprinted in the narratives of the way we live. It’s a difficult thing to change.

In your view, how can we organize ourselves now to continue thinking on these social issues and acting accordingly?

I hope the awareness of the need to open up remains. I’m afraid it’s fully up to us young independent artists. I have to say here in the Netherlands, the big institutions are doing their jobs, albeit late and not enough at the executive level yet, but we are getting their attention. Things are in the making. Inclusion is a priority policy now.  But we need to stay vigilant. We need to be heard and ideally in an intersectional way, so we also appreciate what we have here. The debate needs to evolve and for that, we need more people in recognizable positions.
Our field is connected to the economy in a precarious way; what little money we make is earned by flying around to introduce ourselves and our work in as many places as possible. We need to think about that as well; we need to know what we want and need in order to change the images we’re presenting to the world. How can we achieve our goals without letting ourselves be led by the economy alone? The Netherlands is a sensible place where I hope this can be achieved. We should think bigger. We need to connect better and work hand in hand with the field.

How do you see the future?

I don’t know what to expect from the economic situation or which of the topics will remain. Black Lives Matter is not going away, but we have a long way to go. Personally, I’m very positive: I have work, visions and plans for the future. I’m confident I’ll be alive and kicking for some years to come. How and what the circumstances will be, I have no idea, but I will be there!

Dancer and choreographer Cherish Menzo: "The anti-racism movement is not just about one issue, there are many issues and they’re layered"