As one of the main theatre companies in the Netherlands, Het Nationale Theater emerged defiantly from the COVID-19 lockdown with the slogan ‘HNT speelt altijd’ – we perform no matter what. From 28 – 30 August, the company premiered a series of monologues and a short play, presented in double and triple bills. Sea Wall, written by Simon Stephens, is performed in English by Emmanuel Ohene Boafo.

On 30 August it was part of a double bill with Krapp’s Last Tape, performed in Dutch by Jaap Spijkers. Both plays were directed by Erik Whien. Sea Wall is a beautifully written, well-structured play: loving details of the everyday roll in from photographer Alex’s memory, wave after wave, until his story abruptly funnels towards its dark climax. In lifelike, natural sentences Alex reveals himself to his audience, trailing off, getting caught in his own details, pausing to conjure the voices of his wife Helen, their daughter Lucy, his nonconformist father-in-law with whom he talks about God and beer.

The realism is mirrored by the soft folds and creases in Alex’s everyday clothes and the bare stage, with only the warm yellow light of a Mediterranean summer to light up the bare back wall – the scene is the beaches in the South of France. Diving near the sea wall there with his father-in-law makes Alex startlingly aware of the black depths beneath the waves. The anecdote foreshadows the awful drop his happiness will take; it is visualized by the sunken orchestra pit (which had been raised in the first play to bring Krapp and his tapes up close to the audience). 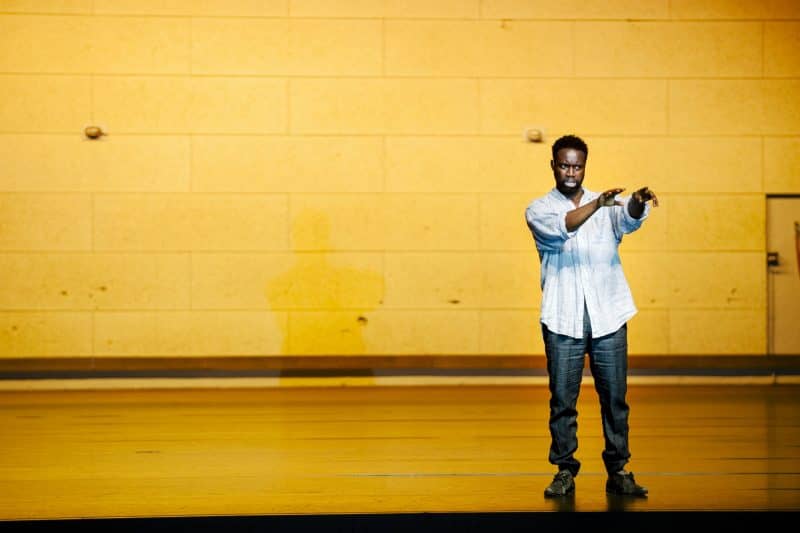 In Alex’s hesitation to get to the point, the play is one that hinges on its silences. What is held back outweighs what is said. A pity then, that Ohene Boafo steps aside, screws open a plastic water bottle and takes a long drink during his first longer pause. What would have happened in the audience if he had just let it linger? What would the suspense have triggered in our minds and bodies, sitting there waiting to find out what this man was trying to circle around with all his fond reminiscing?

Ohene Boafo is a fine actor with the skill to draw a whole world with just his great big beaming smile and arms wide open to catch the daughter as she comes running across time. But the decision to perform the play untranslated works out a little less favourably. Not that I don’t believe a man living in London may sound more US than UK – it’s an international city, that can be explained. But there are speech rhythms to factor in, and vital differences in consonant and vowel sounds, which when disregarded cause static on the line between actor and audience. When he mentions people rowing in the street, I’m sure they aren’t holding oars.

In the end, the tragedy crashes over the auditorium regardless, with events that come across on so many other levels than that of speech alone. Sea Wall is a gem of a play. And it is so wonderful to be able once again to witness a live performance of it.

Cunningham director Alla Kovgan: "You can almost physically experience the distance between dancers"