Cunningham director Alla Kovgan: “You can almost physically experience the distance between dancers”

After a process of seven years, and a delay due to Corona, Cunningham is finally reaching the cinemas (3 September). In the film, director Alla Kovgan delves into the first thirty years of Merce Cunningham’s almost seventy-year career, re-envisioning some of his most iconic works into glorious 3D.

What was your first encounter with Merce Cunningham?
I first came across Merce Cunningham on film. I founded a festival in Saint Petersburg called KINODANCE, where I try to introduce more people to dance and film. I saw a recording of one of his performances in Germany, Variations V. It was done in a television studio. There were a lot of screens with 16mm projections, there were plants, there were dancers, Merce was riding a bicycle. As I learnt later, the projections were made by renowned avant-garde filmmaker Stan Vanderbeek and Nam June Paik, a video-artist. I thought: who is this Merce Cunningham? How did he pull together this incredible constellation of elements, and of artists?

When did you realize you wanted to make a movie about Merce Cunningham?
In 2011 I saw the movie Pina by Wim Wenders, in 3D. I became very interested in this new technology for filming dance. 3D does something very unique for dance. You can almost physically experience the distance between dancers. Around the same time, I saw one of the final performances by the Merce Cunningham Dance Company. This got me thinking: maybe Merce and 3D would be a good fit.

What makes his work such a good fit for 3D?
Merce dedicated all his life to figuring out the body in and through space. He also tried to liberate dance from the proscenium stage with his Events. It started in 1964 when Merce and his company were in Vienna and were offered to do a performance in a museum. He quickly realized that none of his repertory dances would work in their entirety in this specific location, with its stone floors and small spaces. So he decided to take different excerpts from different dances and put them together. The musical score was created on the spot by John Cage and David Tudor. This became Event No. 1. These Events became his big signature. The company performed everywhere. In a plaza, a gym, on rooftops. Merce was also fascinated, almost obsessed, with technology. He worked with film, with motion capture, he used computers to invent new movements. I think that, if he were alive now, he would have used 3D, primarily from his desire to see the body and the choreography from all possible angles. He even made a dance, Summerspace, excerpts of which you see in this film, referencing Albert Einstein’s theory that there are no fixed points in space. With 3D you basically open up the work to different possibilities of how bodies relate to space. Merce was always saying “yes” to things. When you say “yes” to things, things become possible. When you say “no”, you are basically cutting off possibilities.

Cunningham created works from 1942 almost up until his death in 2009. What made you decide to focus solely on the first thirty years of his career?
I initially started this project out of a fascination for his work, because I was interested to see how I could translate his ideas into cinema. But when I began researching who Merce was, I discovered an incredible human being. The years that fascinated me most were those early years, when he was not a famous choreographer but a struggling dancer in New York City. He had no money, no audience, no press, no support. But what he did have, were his friends, who would all turn out to become very famous. Composer John Cage was both his creative partner and his lover, Robert Rauschenberg was a visual artist. At that time, each felt like an outsider in their own world. I think that is what brought them together. Merce persevered for thirty years before he actually received any support. I found that story incredibly moving. So I decided on focusing on these thirty years, starting from 1942 when Cage and Cunningham gave their first performance together, to 1972 when Carolyn Brown, the last original member of his company, left. It really felt like the end of an era. 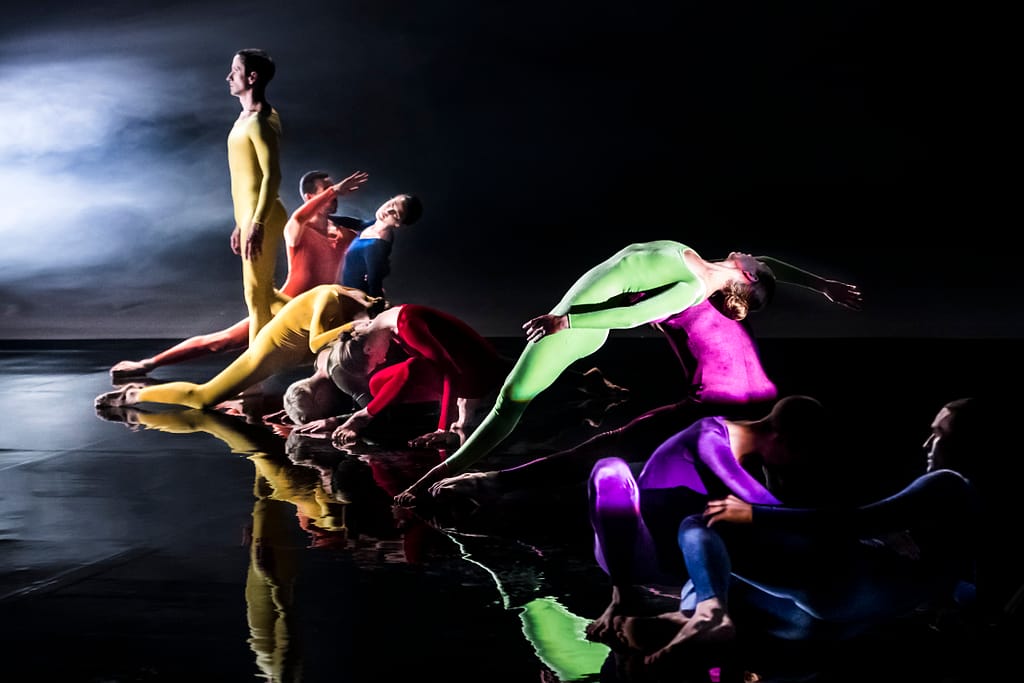 The main focus of your film were always the dance pieces?
Yes. From the eighty performances he made during that time, we – directors of choreography Robert Swinston, Jennifer Goggans, and myself – chose fourteen of his most iconic works. Then we tried to work out how to make them work in cinema. We don’t capture dance, we create cinema. Cinema does not think in proscenium stages. It thinks in places and spaces. We tried to pinpoint the central idea behind each piece and see how we could translate this into cinema. Winterbranch is based on the idea of falling, so we put the dancers high up on a roof. In Rune, Merce investigated layering, so we positioned the dance in a forest, transforming the dancers into another layer in the landscape. Crises explores physical proximity. We couldn’t put the piece in narrow corridors, because the dancers needed space to dance, so we tied the dancers with light and shadows.

Cunningham was notorious for leaving things to chance, as in his Events, but also whilst working with composers and set designers. He left it to the last moment to let everything come together. Did that make it easier to get creative with his work?
It did give us some creative license. We felt we could do this because he could have easily done this himself. It was in his spirit. At the same time, chance on stage is completely different from chance in cinema. We have to choose locations, we have to choose costumes, the dancers have to know where and what they are going to perform. In film nothing is actually left to chance.

The two directors of choreography were both Cunningham Company veterans. How important was it to have them around for this project?
Robert was with the company for 32 years, Jennifer for 12. We started out with Robert, who immediately was into the idea. He really has Merce’s spirit; he says “yes” to things. Then he moved to France to start his own company, and Jennifer basically became my right-hand woman. She has been here through the whole process, all the way to the editing. We learned so much from each other, the different ways we look at dance. She as director of choreography, me as a film maker. It was a beautiful collaboration.
Except for one, all the dancers in the film are former members of the Merce Cunningham Dance Company. They are the last generation of dancers trained by Merce himself. Many of them were part of the last world tour of the Merce Cunningham Dance Company in 2010-2011. They carry something of Merce within their bodies. And they are the last ones who ever will. It was really special and important to have them join the project. Mind you, it took seven years to make this film. When we had our first rehearsals in 2013, the company had just closed, the dancers were in shape, they were ready. When we finally started shooting in 2018, many of them had moved on, dancing with other companies, doing other things. A lot of the dancers then went back to the studio to train for six months, to get back into the work. This was incredibly moving. Their rigor, stamina, work ethic, and striving for perfection were formidable. I am incredibly grateful to them.

What is the biggest challenge when filming dance?
Synchronizing the movement of the camera with the movement of the people in relation to space. Choreography is the art of organizing action in time and space. It’s one of the most complex things you can do. Often people think that choreography isn’t really science. But if you look at the things that Merce did, or Pina Bausch, or William Forsythe, you quickly realize that choreographers are not only artists, they are also mathematicians. They work with geometry all the time, organizing action, time and space. Filmmakers do this as well, but our space and time are different. The trick is to reconcile these differences, to find this magic where they are in perfect sync. Also, with 3D you can’t cut. Otherwise your eyes will hurt. We had to really design every single shot, choreograph the camera every single second, as if it was the eye of the audience. It’s very precise, meticulous work, it’s almost like weaving the two artforms together.
This project was also particularly challenging just to make it happen. This is a 3-million-dollar production about an American avant-garde choreographer. To convince the world that it was worth making and worth funding was the real challenge.