‘You have only seen Horror right? SYZYGY is nothing like that,’ someone said to me right before we entered Theater Bellevue. Being told something is definitely not like something else can be a double-edged sword. On the one hand it manages expectations, on the other, just mentioning it places the juxtaposition front and centre. It’s like telling someone not to think of a polar bear. But I have to agree: SYZYGY, the latest performance by Jakop Ahlbom Company, which premiered 3 September as part of the Nederlands Theater Festival, is not like Horror.

Even if Horror, one of Jakob Ahlbom’s most iconic works, hadn’t been mentioned, I was inevitably reminded of it, if only because of the presence of performers Silke Hundertmark and Gwen Langenberg, who played the sisters – one alive, one less so – in Horror. SYGYZY, which was supposed to premiere at the Meervaart theatre last April, before Corona hit, is a simpler and smaller-scale production, focusing on the theme of the human body.

At the back of the stage there is a façade, containing four doors surrounded by different types of wallpaper. The four performers (Langenberg and Hundertmark plus Çigdem Polat and Merel Severs) enter and exit the stage, one after another. Every time they reappear, they are wearing a different outfit, as if they were playing dress-up: a business suit, a boxing outfit, a gala dress. As the scene continues they start interchanging clothes. The exact same outfit has a different effect on each body. While the long skirt and Doc Martens turn Hundertmark into a goth chick, the exact same attire transforms Polat into the cool girl. These moments offer small but interesting insights, even though the main point of the scene seems to be more about personality than body. 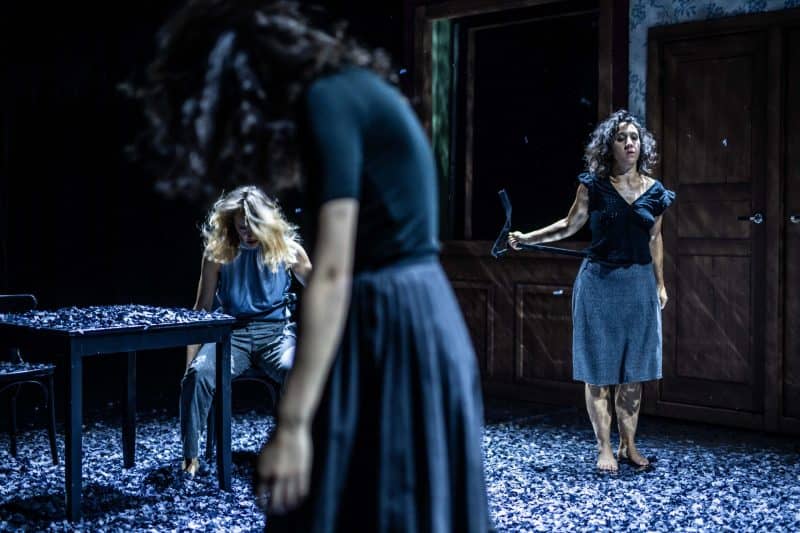 Although the wording in the programme is manifestly gender neutral – ‘the human body’ – by positioning only women on stage, the piece inevitably becomes about the female body. This is most apparent in the first scene, which touches on gender stereotypes – the cool girl, the bookish girl, the goth girl, the tough girl. In the following scene the four women start groping themselves, as if their hands were not their own, but those of an unseen perpetrator. In the finale the performers, dressed in black, end up one behind the other, forming a line, sculpting themselves into living statues with multiple arms and limbs like a representation of a Hindu Goddess.

Having a male artist make a piece about the female body doesn’t necessarily have to be a deal breaker, though I do wish the performance had a clearer focus on what, exactly, it wants to say. What does a scene in which one of the performers lifts up Langenberg’s skirt to reveal her bare bottom tell us about the (female) body? Or the one where Hundermarkt tries to undress herself, while the rest is trying to keep her clothes right where they are? Most ideas and scenes feel scattershot; briefly entertained and then discarded, like the disposable party hats worn by the dancers.

There are flashes that are distinctively Ahlbom. There are moments of absurdism – the use of elongated limbs (think Terry Jones in the ‘Find the Fish’ sequence in the movie Monty Python’s The Meaning of Life), pussycat handpuppets, a corded phone pulled from under another woman’s skirt – and alienation – a woman’s front which ends up being a woman’s back. There is even a hint of horror when a pair of hands appear out of a woman’s head. 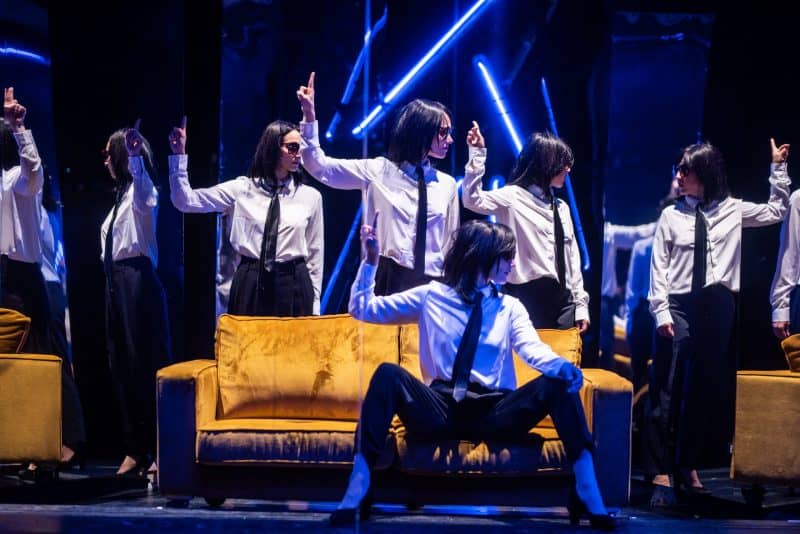 SYZYGY also has its fair share of arresting images. Especially near the end, when all four women are inside a closed, but see-through box, all dressed as Uma Thurman in Pulp Fiction (including the black wig). Here, Ahlbom uses short black-outs to optimal effect, just as he did in Horror.

In the end, it is not a comparison with Horror that springs to mind, but other performances that dealt with the themes Ahlbom seemingly touches on, like female desire and sexuality (Co(te)lette by Ann Van den Broek, CUTLASS SPRING by Dana Michel) and gender stereotypes (ROLE MODEL by Nicole Beutler and Magne van den Berg). However, these all shared a coherence and laser-like focus that SYZYGY sadly lacks.