For its 25th anniversary on Saturday September 12, dance company De Stilte gifted the audience at Chassé Theater Breda with two free performances of their 2019 show De Ontspoking. De Stilte has extra cause for celebration: the company just procured a coveted spot in the 2021 – 2024 BIS as a dance company for young audiences.

De Stilte, run by artistic director and main choreographer Jack Timmermans, originally made grown-up fare, but quickly redirected its attention to younger audiences. (In a way, De Stilte did the reverse of what Scapino Ballet did before them; starting in 1945 as a dance company for young audiences to later refocus on adult audiences.) The company travels abroad extensively, and is one of the main founders behind BRIK, a bi-yearly international youth festival in Breda (Brabants Internationaal Kinderfestival). One of De Stilte’s specialties is their work for really young audiences, ranging from toddlers to elementary school pupils.

Which doesn’t mean that what they offer is childish. Timmermans opts for more abstract dance and physical theatre, effortlessly incorporating live music and musicians, which often makes the pieces engaging for adults as well. One of the best recent examples is Mankind (6+), a clever play on both the English word and a Dutch composite of the words “man” and “child”. On the surface Mankind is about three dancers goofing around with a small truckload of books, accompanied by a saxophonist and a pianist. But at the same time the piece touches on thought-provoking themes of evolution and humanity.

This does make Mankind a tough act to follow. De Ontspoking (4+) – not an actual word in Dutch, but it can be roughly translated as ‘deghosting’ – has a strong start. Whispy voices simmer in the darkness, a single flashlight pokes through the dark. A man (Gleen Orlando Mardenborough) is walking home, his footsteps echoing on an empty street. When he arrives, alone, his house is not as empty as it seems. Seven lost souls (three singers, four dancers), all dressed in white, are wandering around the house as well. But although we, the audience, can clearly see them, the man cannot. 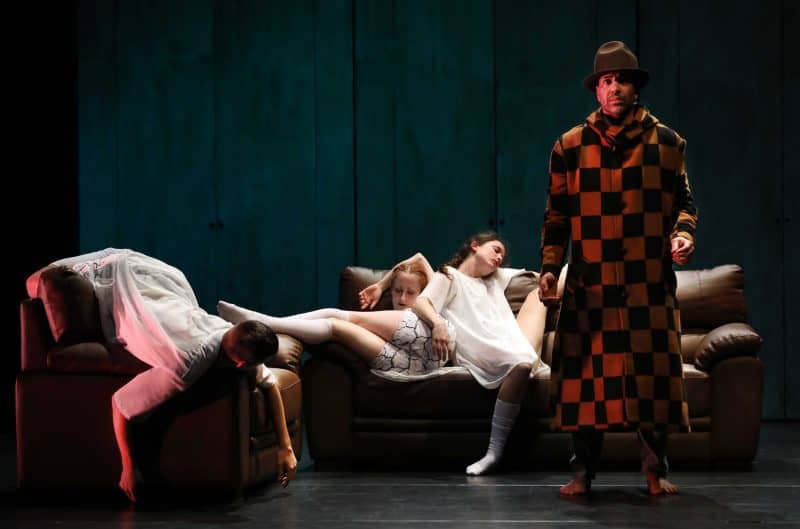 Parents, supervisors, have no fear. The beginning of De Ontspoking may be mildly spooky, on the whole, this haunted house story is pretty cheerful. Most of the time the ghosts are hiding in plain sight. They are definitely of the more harmless and friendly kind; more Casper than the malicious apparitions in Jakob Ahlbom’s Horror. Most of the time they simply follow the man like shadows, mimicking his dance steps. They can also be quite mischievous, spiriting away the man’s hat, coat and shoes, even going as far as manipulating his movements when the friendly lady from next door (Wiktoria Czakon) comes to visit.

Timmermans and composer Martin Fondse – also performing live – make great use of tthe three female singers’ voices (Marit van der Lei, Sanne Rambags, Anna Serierse). There are some inspired visuals: human shapes beneath a huge burgundy cloth, the shadow play between the slats of the Venetian blinds, performers appearing and disappearing behind the double doors of five huge wardrobes. The action did become slightly repetitive over time – which, to be fair, the target audience didn’t seem to mind – and I was hoping for just a little more depth, just one added layer. Perhaps Mankind (slated to perform again December 23 at Maaspodium Rotterdam) has spoiled me: I can’t expect to be pondering the meaning of life in every children’s show, all the time.