The Fringe Festival presents lesser known, more experimental and fresh new makers in several cities across the globe. When you say Fringe, the first location that comes to mind is Edinburgh, a city that for three weeks every August explodes in a tsunami of performances catering to every taste.

The considerably smaller-scale Amsterdam Fringe Festival (3-13 September, different locations across town) presents a perhaps more controlled creative explosion in terms of size and numbers, but one that is more concentrated – and possibly more radically experimental, too. Creations from the literal fringes of performance practice, featuring artists “from a wide range of backgrounds, origins and futures” with a common interest: a love for the unknown. Lucia Fernández-Santoro and Jordi Ribot Thunnissen explored some of the performances and talk about their findings in two separate articles.

LFS: Let’s start with the work we both saw. Tracing erased memories by Hilda Moucharrafieh & Dina Mohamed, an award winner at Fringe 2018 that returned this year. It’s a site-specific immersive walk of great quality and very relevant in the current socio-political climate, so it was worth revisiting. The piece draws beautiful parallels between the buildings and spaces that formed the backdrop to historic protests and revolutions in Amsterdam and Cairo. Gentrification and urban restructuring are stripping these sites of the reverberations of these events, effectively erasing them.

JR:  I felt this documentary style proposal counted us as characters, as, armed with tablets and headphones, we must have looked to passers-by like a couple of weird-looking tourists. Tourists: in a way, the unwitting consumers of the clean and aseptic reality the performance warns against.

LFR: Gently guided by Hilda Moucharrafieh herself, walking from Het Maagdenhuis to Dam Square, we paused in front of symbolic buildings, our screens mirroring the same facades with images from their unruly past, and of streets and squares in Cairo that slightly resemble them.

JRT: I was compelled by this overlap of present and past, of different local public spaces and a shared grief for these lost battles against the status quo. It was very well produced. For example: as exhilarating as it was to watch and listen to the testimonies of those who stood against the sellout of the former Humanities faculty building Het Bungehuis in 2014; reading the actual golden plaque at its door afterwards felt as an equally intense cold shower. This plaque marks this historical building as the current Amsterdam headquarters of the Soho Club – the epitome of a global, elitist and class-confirming social network. Today, the clean facade is untouched, a landmark of De Amsterdamse School, but how much of the city can be still found behind it? And is that the city we want to remain? 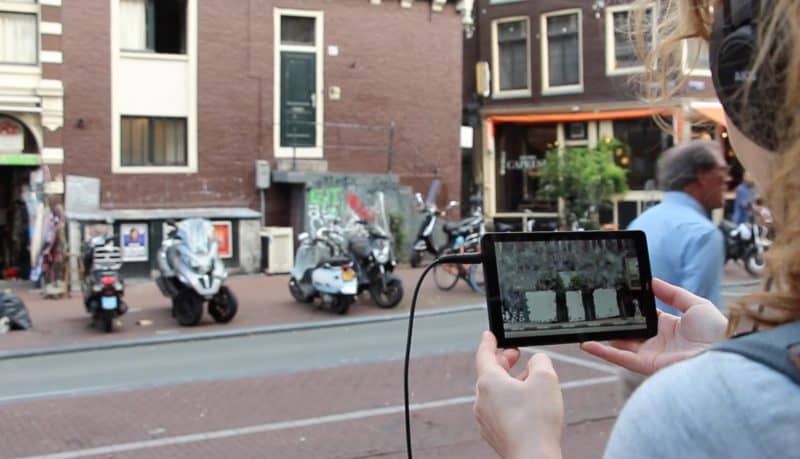 LFS: At other times the buildings were used as symbolic places to reflect on what happened in Cairo. For instance, we finished the tour by standing on Dam square, after listening to what went on on Tahrir square. With its beautiful intertwining of images from the two countries, this walk offered a relatable and touching entry into these histories that we forget so quickly.

JRT: I agree. After the walk I was silent. I love this ability of performative works of art to bring the personal and the collective, the staged and the real, closer together. The value of taking the time to see things, facts, events or places from a different point of view. Theatre and dance as a trigger for thought… sorry, I’m rambling. Back to you. The voice as a guiding tool. You chose this title for a reason…

LFS: I did, because in the two other performances I saw, the voice played an equally important part. In Aissa Kraayenbrink’s Lak’hech (Mayan for “I am another you”) it’s an important catalyst for movement. Performed by Kraayenbrink herself with vocalist Melvin Aroma, the whole first part of this duet is actually a solo, in which we see her moving in front of three mirrored panels. Once Aroma steps onto the stage, the whole meaning of her movement changes. Until then, it seemed to add up to no more than a collection of material for a contemporary dance class. But as Aroma starts singing and vocalizing sounds, her body is activated differently. Suddenly you realize there is a beautiful connection between the two.

JRT: Did this connection between voice and body also convey a message of its own?

LFS: They end up physically connected, the dancer manipulating the body of the singer and vice versa. Finding a voice, needing a voice, having to be heard…The singer’s vocal exploration is an abstract expression of his personal experience of current social matters such as Covid-19 and the Black Lives Matters movement.

Continuing with the voice as a connector, or as an initiator or triggering force, this brings me to Without quite knowing by Irina Baldini. This piece, presented at Dansmakers, proposes ephemeral truths through movement and sound. Every audience member receives a pair of headphones. The binaural recordings we hear create the effect of experiencing sound in 3D. The voices of the performers are mixed into these, with the live ambient sound as a third layer.

JRT: Sounds like quite an intricate technological set-up. I wonder if the effect of that didn’t overpower the desired effect on a conceptual level? What I want to ask is: did it do anything for you, beyond the sonic fireworks?

LFS: Yes, it did. The set-up serves the purpose of the piece very well. Baldini starts by speaking on a microphone, and the sound travels between our headphones and the stage, almost mysteriously, like a body of sound that dances with the performers. That was interesting, it really drew my focus to what was happening. It wasn’t so much in the volume of technological gear that I felt the piece suffered from overkill, but more in its use: as the piece evolved, the performers seemed to be following an improvisational score and giving each other verbal queues to switch physical states. The piece kept accumulating and ended up becoming a lot of movement, plus a lot of text, plus a lot of sounds. Despite having a clear core of research and craft, the combination of all the ingredients together flattened the experience. The initial mystery that drew me in at first, waned as the piece progressed. 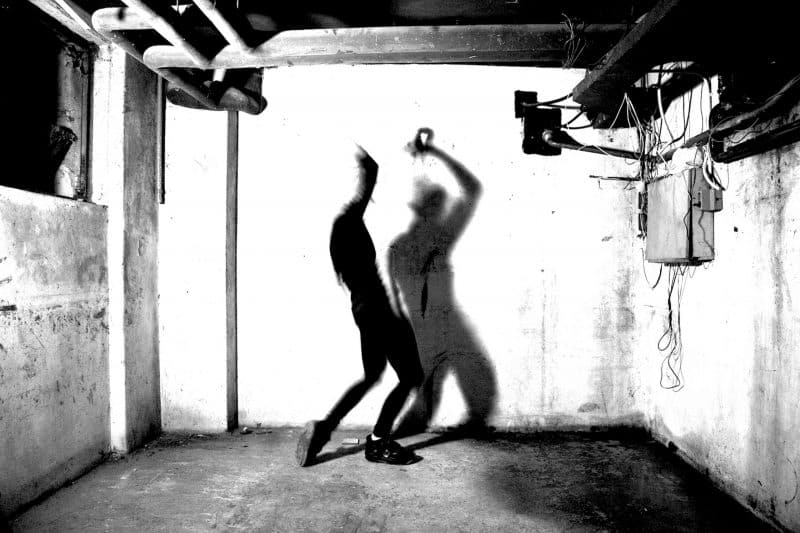