Kicking things off is Antonin Rioche (nominated by Korzo) with Huidhonger (a hunkering for physical contact). Two people are lying in a fetal position on the floor; a dark silhouette is standing in front. The lights switch on and off, and on and off again. Only when the lights go on for the third time the silhouette gets more textured: dancer Adi Amit is dressed head to toe in a lilac latex ensemble, the lower part of her face obscured by a gas mask, although Amit’s expressive eyes remain visible. Her body starts moving, expertly conveying the message of a voice-over that can be heard over the speakers. It is a message about the complex nature of love, with the Man (Martijn Kappers) and the Woman (Mariko Shimoda) as prime examples. We watch their love story unfold. From the first furtive glances, and tentative advances; the movements getting broader and more pronounced when the love deepens; until the inevitable ending, when one of them – literally – falls out of love, and what is meant as a loving embrace by one is felt as a choke hold by the other. 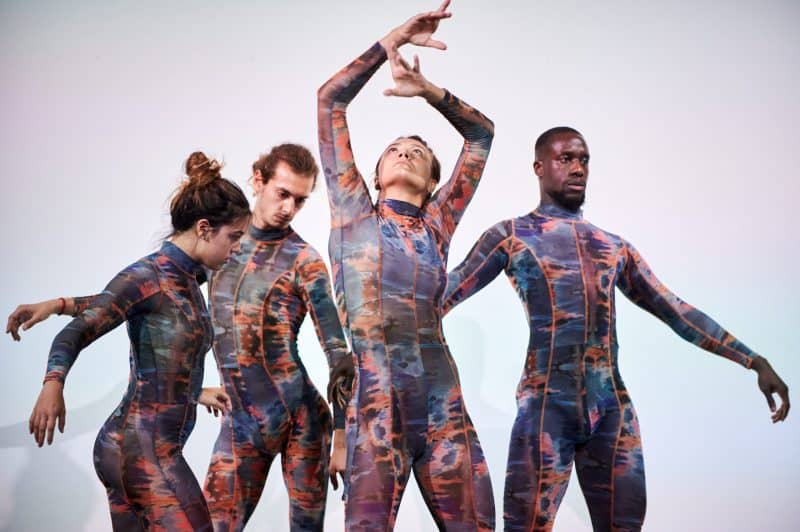 Huidhonger is the most straightforward of the three pieces – even taking a post-apocalyptic lilac dominatrix into account – especially when compared to its follow-up, WARPING SOUL by Andreas Hannes (nominated by Dansateliers). Four dancers (Alberto Albanese, Laura Costa, Maud Huizing, Remy Tilburg) are seated on the floor, wearing sneakers and body suits. Their bodies are gently swaying. They have a faraway look on their face, as if they weren’t really present. The dancers seem phased out, both in body and in mind. Moreover, they seem to be not quite from this world. It is not often that a performance can actually make you believe you are watching completely different creatures. The four dancers move more like alien robots, trying, not entirely successfully, to reboot after having just arrived on earth.

Having your dancers barely stir for the first ten minutes is a bold move, but it pays off. The piece is at its best during these quieter, contained moments; later scenes, which see them running around uncontrollably, lack some of the intense focus. But the piece is never not riveting (Huizing certainly stands out). WARPING SOUL is an exhilarating watch.

It did make me slightly anxious for the piece that had to follow these strong acts. Fortunately, DO WE FEEL, by Dalton Jansen (Conny Janssen Danst’s contribution), keeps the adrenaline pumping. It starts with a woman (Liza Wallerbosch) furiously performing CPR. But in the roughly twenty minutes that follow, we see three people (Hiro Murata, Ricky Nainggolan and Wallerbosch) who are constantly in fighting mode. Every action, even courtship, is a taunt, a struggle, a battle. When the CPR-scene occurs a second time, it suddenly doesn’t feel as heroic or kind-hearted. The dancers give a kinetic and ferocious performance, and keep this up almost to the very end, when it tapers off a little.

Overall, Danslokaal offers a strong showcase of three confident new voices. If this is what they can do in this short amount of time, and during Corona, I’m excited to see what is next. 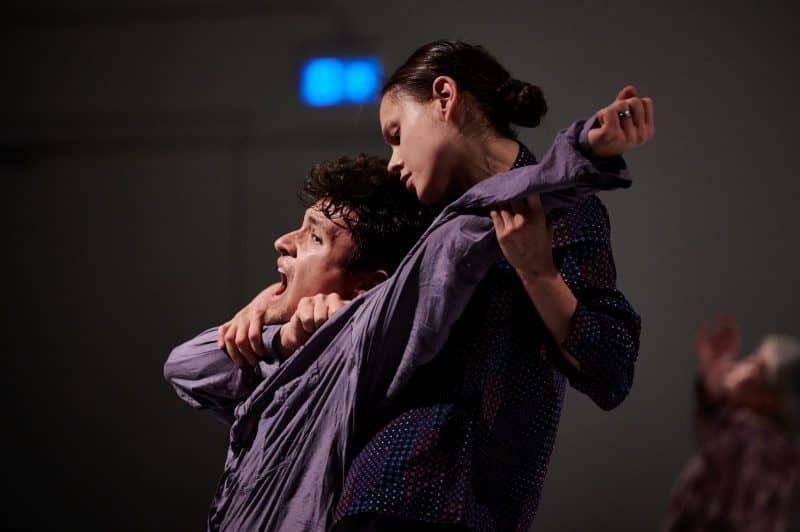 DO WE FEEL, by Dalton Jansen | photo: Salih Kilic