Florentina Holzinger has always been obsessed with ballet. In most of her pieces, there is at least a hint, a connotation, a moment of ballet. TANZ is no different: at Theater Rotterdam on 18 September, a ballet class opens the piece. But although clearly, every element in this jam-packed celebration slash consecration is deliberately and intelligently chosen, the question remains: did I need to see all of this?

A ballet master, Beatrice Cordua, tells five girls to place the bars to start class. Just as I remember from my own ballet days, she soon asks the ballerinas to take something off, to see them better. “Ballet is about lines”. If it weren’t for the fact that Cordua is fully naked herself, this scene would be completely traditional. The peeling off of clothing continues until all are naked. From then on, an avalanche of odd situations, absurd images, and impressive tricks unfolds.

Like most classical ballets, this work consists of two acts, announced here on screens to each side of the stage and written in bloody lettering, an old-school horror movie typography. Submerged in a Suspiria-like atmosphere, we witness the destruction of the female archetypes in these ballets. The pure and fragile nymph waiting to be saved, validated by a higher force, the princess in distress, etc. Holzinger deconstructs these images by cleverly over-exaggerating their opposites: these women are strong, empowered in their bodies. The ballerinas are joined by more women: a witch, a camera woman, suspension artists, acrobats…until ten female figures constitute an army of fairies gone wild. Naked throughout the piece, they fly around the stage hanging by harnesses, performing acrobatics and peeing into buckets.

Between the two acts, Holzinger stops to welcome us and mentions we would normally be allowed to pee in the buckets too, but that COVID regulations don’t allow. After briefly explaining the traditional structure of ballets, she mentions another initiative: she is planting apple trees in her hometown and is looking for donations. She starts a bidding game to see who has the most cash on them. If the goings-on on stage so far felt like Holzinger’s wildest dream turned into a playground, this moment felt surreal and self-referential. 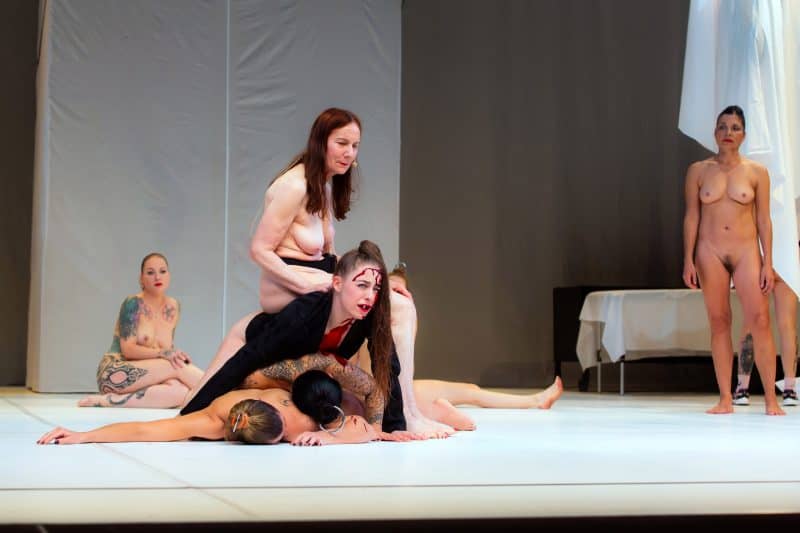 The second act unfolds as violently as ‘expected’: Renee Copraij helps Beatrice Cordua give birth to a rat, the nymphs fight flying in mid-air, Holzinger and Netti Nüganen dance a modernist duet reminiscent of their reprise of Forsythe’s duet in Apollon Musagète. It seems to happen all at once, to leave the audience cringing at a heart-stopping grand finale with meat hooks and a corps de ballet.

Heading out of the room after two hours of fake blood, pee buckets, a donation request and flying motorcycles, I hear someone say: where is the limit? And I wonder too. Holzinger’s craft is undeniable: the technicalities are on point and the references in check. Feminism is in order and irony is abundant.

And yet. With its stacking of elements, TANZ leaves little room for contemplation. All the work is done for the audience. Despite the interrupted narrative, the story is the least aspect to worry about. I am reminded of the Austrian performing arts movement of the 1960s-70s: the Viennese Actionism, which used destruction and naked bodies as a means to reject commodified art. As a consecration of the female body, a relentless social commentary, TANZ is a necessary piece. But in its insistence, it makes for a tiring experience.

Till We Die \ Spaar ze