There is no such thing as a simple truth. In Sons of Abraham, which premiered at Bellevue Theater in Amsterdam on September 23, storytellers Sahand Sahebdivani and Raphael Rodan join forces with director Tim Radcliffe to tell the story of Adil and Samir, two undocumented Kurdish brothers living in Amsterdam. Navigating between fiction, documentary and stand-up, Sons of Abraham by Storytelling Centre uses clichés on both sides of many-a-border to move beyond them, drawing close attention to certain painful aspects of our reality.

Whereas in prior works, such as the award-winning My father held a gun, the duo told stories about their own experiences, here they draw from others’ to address similar themes: identity, the ruthless reality of migration, the cultural differences between East and West. Adil and Samir are fictional characters inspired by people like Malik, a Kurd whom Radcliffe met during the time he lived in the jungle-refugee camp in Calais – and whose voice is also present in the piece.

Thus taking two steps back for the sake of perspective, Raphael and Sahand stay close. Cleverly dismantling the fourth wall at times, they build up a polyhedral mirror that is as intriguing as uncomfortable to peer into and – in an act of careful dramaturgical equilibrium between carrot and stick – hold it up to us in ways that remain constructive. For instance: the moment they ask us to help them by illuminating a scene using our phones. We are reproducing the sort of light that would have accompanied the two brothers on the boat from Turkey to Greece. While the act evokes a nice sense of cooperation in the here and now, the feeling is uncanny, as we are fully aware of it being yet another placebo that just makes us – privileged spectators of the show – feel good. 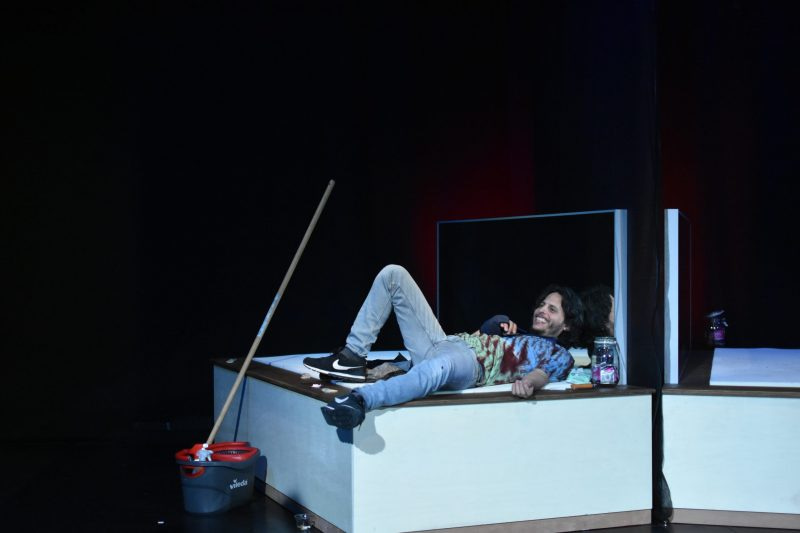 Sons of Abraham knows other memorable moments. Both storytellers outdo themselves, bringing the context of the two brothers closer in well-paced, colourful monologues depicting life in Kurdistan. The decision to give us time to observe the close-to-radicalised Adil pray to Allah in silence makes an eloquent argument. The rarity of this form of cultural representation on the Dutch stages is powerful in itself, as is the length of the moment, which mutely makes us wonder where similar moments of intense inner dialogue are left in the godless West.

Clichés, clichés, clichés – “sad facts”, Sahebdivani calls them at a certain point. But, even if clichés do tell us something about reality, in Sons of Abraham perspectives around them pile up. As the two actors combine the cliché-like stories of Adil and Samir with rehearsed intermissions in which they argue amongst themselves or open up to the audience, a complex network forms of relatable experiences and different cultural mindframes that influences our reading of the brothers’ decisions.

‘Why Theatre?’ Milor Rau posed this question to a diverse group of theatremakers who collectively provided the opening speech of the Dutch Theatre Festival at the beginning of the season. Leaving the Bellevue, Edith Kaldor’s answer came to mind: “Live performance, theatre, is a way to re-see what you cannot unsee. It’s a way to bring it close, to make it concrete. To give it time, to give it attention. To look, and look again. And look longer. And look better”.

Till We Die \ Spaar ze