On Thursday 24 September, Scapino Ballet opened its season with a mixed bill at the Van Nellefabriek in Rotterdam. The title, The Blend, befits the location, as the factory was once the site where Arabica and Robusta beans were blended into Van Nelle’s coffee. With work by Justin de Jager, Alba Carbonell Castillo and rapper Dox (Unorthadox), the programme presents a range of different vocabularies. The eclectic array of energies could do with some finetuning to form a coherent whole.

The mood is hopeful. Scapino is raring to perform after months of lockdown and the company’s recent subsidy scare (initially, the RvC threatened to discontinue its funding, until the Minister stepped in to top up the budget for dance in the BIS). Seating the audience takes a while in a corona-proof setting, so the dancers and musicians offer a prologue between and around the seating areas, playfully challenging and chasing each other.

This prologue segues into a fluidly executed quartet, Carried Alive, a choreography by Justin de Jager with two male and two female dancers performing an intricate threading sequence; one dancer forms the ‘eye of a needle’ by forming a circle with the arms, legs, or the whole body, while the others ‘thread’ themselves through without touching. Threading stems from breakdance, and watching classically trained bodies perform it not as a linking movement but as a complete language adds a graceful note of serenity. The dancers’ ease and precision ensure we watch with interest as their bodies tell a story that takes us from children at play to crossing the threshold of the hereafter.

Alba Carbonell Castillo continues the poetic line with her choreography What Remains. From the sides, her six dancers enter as if wading through a dreamlike fog and wearing white bunny masks. The group scouts the dance floor, crouching and rolling away from the counterpoint group dynamic to perform short, thoughtful solos or duets. One of them pulls out a brightly coloured, tiny kite. Sadly, this is where the limitations of working in a large factory hall start getting in the way. There are black pillars every few metres, not very massive, but still, they are there, even around the stage. When Ruocheng Wang breaks away with his kite, he is obscured by one of the pillars, so part of the audience is unable to read his face and gestures. 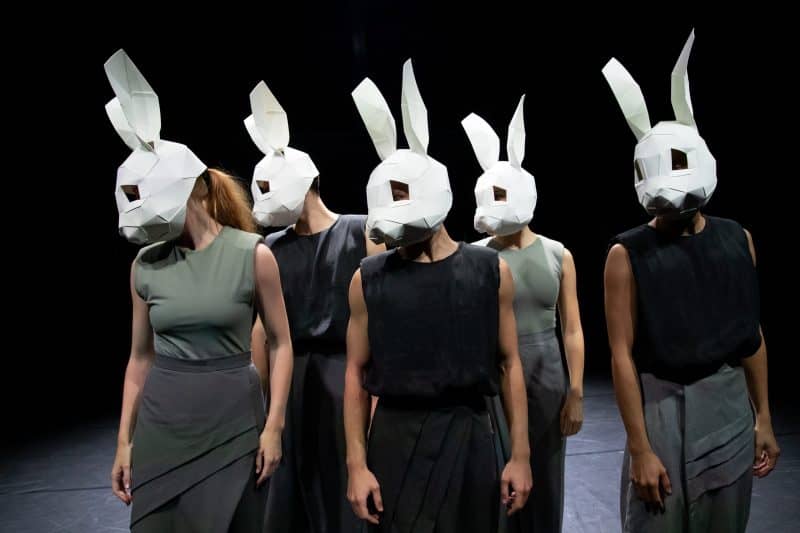 Spoken word artist Dox (Unorthadox) and his musicians next take to the stage with a burst of energy and a barrage of sound effects: Inspiritu (we evolve). Dox reveals himself to be a commanding presence, but more so by willpower than by the strength of what he is saying. Sadly, he drowns his tale, which according to the programme notes was inspired by the dancers and created in the course of the rehearsal process, in a cloud of sound. With his high-energy squats and jumps and tendency to fire up his fellow musicians like a furious conductor, he could easily stoke up a crowd if the hall were filled with 1000 people. But in reality, corona measures dictate a maximum of ten times less, and we’re not a full house tonight.

The piece, with a battle theme and personalised vocabularies for each dancer, lacks focus but does have its moments; bassist Bruno Ferro Xavier da Silva interacts with the dancers, firing at them with amped up bursts of freakish sound effects, to finally be disarmed when dancer Maya Roest threads her long arms underneath his from behind and lifts them in a decisive upward thrust: he is forced to a ceasefire.

Teaming up with Justin de Jager and two dancing couples for the epilogue, written around the Pixies song ‘Where is my mind’, Dox manages to reel in some of the excess before the closing of the show. In a return to a more thoughtful, flowing physicality, It’s about embracing the impotence brings the evening to a more balanced close. 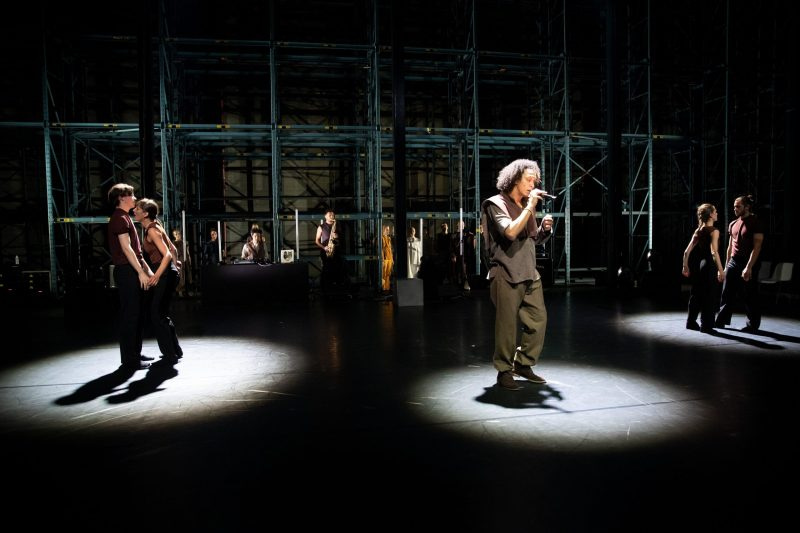