On this strangely warm evening of September 29, I go to Dansmakers wondering if Slug Chamber is the last show I will be able to see for a while. Corona is on the rise again, the measures are tightening and the climate is uncertain. With this event, Stina Fors, the ‘sonic choreographer’ who was awarded a Moving Forward trajectory 2019 – 2020, has created a collaborative playground between four voice and movement explorers.

Fors invited Alex Franz Zehetbauer, Ria Higler, and Veza Fernández to her ‘chamber’, all performing artists and makers working around the voice. As the audience arrives in the space, the four performers are on stage, looking towards the chairs. Dressed in semi-everyday, semi-curated outfits, they seem to be waiting for us to sit. Soon enough, the quartet starts. Their voice of choice: grunting. Noises come from their throats and bellies that sound like flies stuck between windows or pigs being slaughtered. 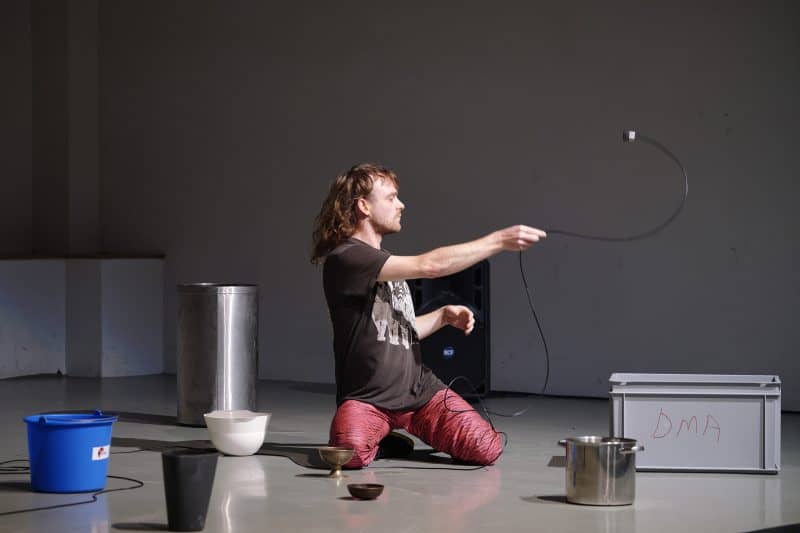 Amid this eclectic panorama of bodies and sounds, something between an experiment and an exercise unfolds. The performers take pieces of what looks like play-doh, and mould these to their ears. It looks like an extravagant type of earplug. Meanwhile, the cacophony continues to build; they sing, scream, and grumble on. The vocal orchestra plays with onomatopoeias, words, and other-worldly forms of communication. Solos and duets succeed each other. Notably, Fernández has a solo in which she links movement to screams and mumbles, giving us the impression there is a certain code and specific logic for her choices. But it is one that we cannot decipher.

Eventually, Fors takes a piece of paper and starts writing, while Zehetbauer sings the words that she writes down. It looks like a private game between two players and forms an oddly pedestrian moment compared to everything that went before, when humans morphed into creatures through sound, and logic was shuffled.

The project is open in nature and is meant to mutate and shift shape across the series of performances. It is a “new way of coming together”, to quote the programme. Perhaps it’s because I am present on the opening night that these aspects don’t seem to be palpable at all, or perhaps it is because the format has been given a traditional setting: we sit on the audience side, watching a stage with bodies and choreographed lights. There is no particular space for the audience to exist alternatively. Moreover, being submerged in a torrent of not particularly pleasant sounds comes across as uninviting at times.

I appreciate the open rehearsal atmosphere and the hypnotic potential of the sonic explorations. But I wonder if this playful shared research of the artists’ personal sonic interests really needed to be cast as a novel concept.