The annual Dutch Dance Festival (Nederlandse Dansdagen) at Maastricht, from 1 – 8 October, has gone digital for its 2020 edition. The bulk of the programme is only available online as so-called virtual residencies. Two of these also offered the option to visit the premiere in real life at Theater aan het Vrijthof: Pilot PC by Connor Schumacher (2 October) and HandsON (3 October).

A simulated rave wasn’t exactly what Connor Schumacher had in mind when he first pitched his project for the Dutch Dance Festival Maastricht Award 2019, for which he was awarded 10,000 Euros to actualize the project. Originally called Stillness is a concept, the performance would be structured around Schumacher dancing together with the audience, but it would be more of a continuation of a choreographic movement practice he already uses when working with amateurs and dance students.

When Corona hit, his original idea evolved into Pilot PC, a simulated rave. Which at first glance seems slightly counterintuitive. A rave is usually a space tightly packed with people, something that is impossible within the current social distancing restrictions. On the other hand, if there is one group of people who knows how to make the most of dancing inside the confines of a few square feet, it is probably those who attend raves. In a world in which all the clubs have been closed since March, Pilot PC almost feels like a political statement, offering the audience a rare refuge, one of the only spaces where dancing/raving – at a safe distance – is currently possible.

Besides a number of Schumacher’s colleagues, including Majon van der Schot, who have been engaged specifically to keep the momentum going and the dance energy flowing, Theater aan het Vrijthof offers space for about fifteen audience members to participate on stage. Each inside their own designated circle. In the auditorium there is space for about 15 people more (if at all possible, they are invited to actively engage with the performance as well). And, just for this particular performance, Pilot PC is also filmed live – available to watch for free on the festival website – from multiple camera angles. This performance is called the online premiere for a reason; the offline version will premiere 12 October at Theater Bellevue in Amsterdam.

The programme consists of three phases. The first is a TEDtalk, which Schumacher uses to explain some of the parameters of the event (what to expect?). Phase 2 is a ‘rave aerobics exercise’ where the dancers are handed tools to ‘survive’ the experience. Phase 3 is the ‘simulated rave’, when the talking stops and the dancing really begins.

Phase 2 is distinctively Schumacher.  With everything he does, from organising movement classes to creating performances, he has one specific goal: to get people moving. To accomplish this, he often inhabits an alter ego, called The Fool, a ‘performative character that reveals concepts in space’, ranging from theaters, classrooms, museums, galleries, festivals, train stations. ‘No place is safe from The Fool.’ As if he were an aerobics instructor – including headset – Schumacher’s alter ego guides us through the motions, all the while talking about his own associations with the movement material. His interior monologue is made external. ‘Softness and strength aren’t opposites’, ‘There is no light inside the body’, ‘I’m already lost.’ Schumacher leads us through different simulated spaces – main hall, chill room, small room – each offering a different vibe.

The experience as a whole is probably about two dance tracks too long. It feels like it is building up towards a climax with a fragment of the 1995 happy hardcore classic Life is like a dance by DJ Paul Elstak, ending with an uplifting message projected on a rear screen: ‘Dance is not an answer. It’s a tool. To craft a way into the uncertain precarious world.’ Then it continues.

If you don’t plan on participating on stage, the online version offers a pretty faithful and engaging translation. Not everything reads as well on camera as it does in real life – the stroboscopic effect is lost in translation – and of course there is no digital substitute for the actual, physical sensation of a beat vibrating through your body. But overall, it offers a more intimate experience, focusing solely on what is happening on stage. At one point it even looks as if Schumacher is dancing by himself.

The experience for the people sitting in the auditorium feels like an afterthought. I can imagine it working much better in a more intimate black box venue like Theater Bellevue than on a full-sized, traditional proscenium stage such as Theater aan het Vrijthof. It will probably be easier there for Schumacher and his entourage to also truly engage the seated audience, looking out as they are here into the dark void of a nearly empty 855-seat auditorium which sucks up a lot of the energy. Of course, Schumacher does need people to be actually physically there, dancing onstage, to make the online version work. 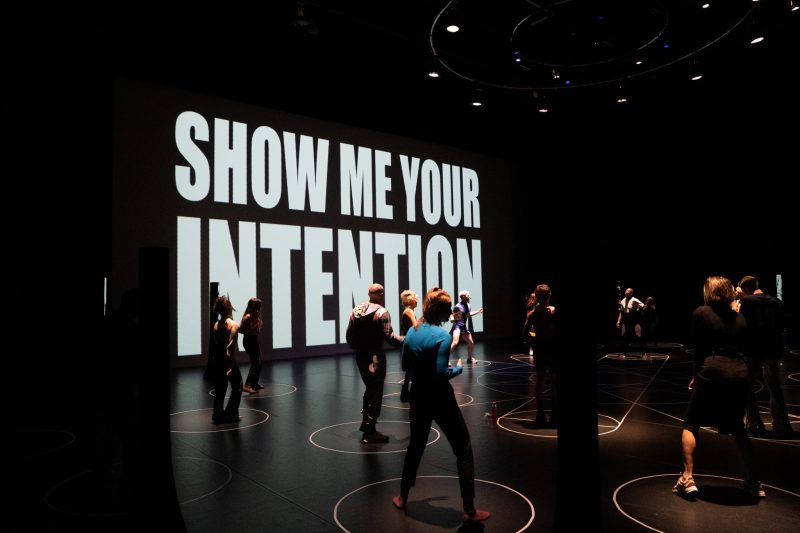 The opposite could be said for the latest project by Another Kind of Blue – founded by David Middendorp. On Saturday, Middendorp demonstrated a prototype of his virtual reality experience HandsON. This show – also available online – is really still in its early stages (a more finished version will be presented at Korzo Theater in The Hague on December 15).

In its current state, the real-life version doesn’t offer that much added value. The preparation is already a bit of a hassle. Due to the tighter Corona restrictions, visitors first have to put on special eye-masks for minimal contact between the VR glasses and their skin, followed by the glasses and a headset. There is also a controller to hold in your hand. At the beginning of the simulation we are inside an empty theater. A virtual David Middendorp walks onto the stage to give a bit of backstory for the project. Middendorp is fascinated by the expressiveness of hands and arms, a starting point he also used for Wereldleiders, part of last season’s Introdans-programme Gek Gezicht.

While he continues talking, we slowly drop through the floor and enter an otherworldly space, in which every structure we encounter is made up of either arms or hands. The scene ends with a duet by Richèl Wieles and Gijs Hanegraaf plus two oversized arms. The final scene is also the part when, in the finished version, the interactivity will come into play – for now, all you can do with your controller is use it as a flashlight. For the moment, the online version will do almost just as well. By using your mouse or tapping your screen you can also look around (up/down, left/right, front/back) the space from the comfort of your own home. Another plus: you can actually see both dancers at the same time in one frame, which is harder to when wearing the VR-glasses.

The visuals in both versions are still a bit blurry though, and the arms could certainly do with more definition, both visually and structurally. This becomes especially clear during the dance duet, which features both dancers interacting with the two huge arms. One of the hands is especially off, with crooked fingers that are constantly changing dimension. For a piece that is purportedly about the expressiveness of arms, there is still some way to go.

The State of Dutch Dance