When earlier this year, artistic director Ronald Wintjens announced that the upcoming Nederlandse Dansdagen (Dutch Dance Festival) would go digital, it did feel a bit premature. After all, the actual festival was still six months away. But with new stricter measures implemented from Tuesday September 29, his decision proved prescient.

Initially, a maximum of 30 people was imposed on indoor venues, with allowances for each municipality to make exceptions for venues of great cultural importance. Seen in this light, NDD has proved an interesting testcase. What happens when a festival and the participating artists actually have time to adequately prepare for a digital edition, instead of frantically scrambling to throw something online at the last moment?

Some background information may be in order. The Dutch Dance Festival, which is hosted every October in Maastricht, is exactly what the name advertises: a celebration of Dutch dance. The programme largely focuses on the highlights of the past season, culminating in the presentation of the prestigious VSCD Dance Awards, (de Zwanen) during Gala night. Over the last few editions NDD has increasingly broadened its horizon, presenting more premieres, screening dance films, adding a dance museum programme, and hosting dance workshops and projects that specifically engage the locals. The Dutch Dance Festival is not just about moving the audience, but also about getting the audience to move themselves.

‘Dans met mij’
Which made this year’s tagline, Dans met mij (dance with me), pretty apt. During the festival you could warm up with a dance work-out every morning (hosted by Maas theater en dans). Every day there were online workshops you could attend, ranging from kids to adults, from amateur to professional, and from yoga to rave (sadly, these weren’t available for rewatching). One of the best offline-to-online adaptations was dansthuis.nl, a continuation of the physical dance programme Bloedbanden, in which local families, with help from a coach, perform a series of choreographies in Maastricht (last year’s edition was situated in and around The Student Hotel). For the online edition, almost all choreographies were performed in participants’ own homes.

The biggest loss of the online edition is the absence of the Gala, with its presentation of the VSCD dance awards and showcases from the previous dance season. The first batch of Swan-nominations was announced during the Night of Dutch Dance. It was quite a nice touch to have the nominees be announced through a Zoom conference hosted by Redouan ‘Redo’ Ait Chitt (last year’s winner of the Swan for best dance performance) and to catch their first reactions. Redo played an important part in this year’s festival. With his daily Op stap met Redo (Stepping out with Redo), Redo gave a concise overview of the coming day’s highlights. Something the NDD might want to consider doing in next year’s – hopefully – real life version.

The Digital Edition offered a nice selection of dance films, among which two short pieces by eenvijfvijf (Leather and the premiere of GAT), and a touching tribute to late choreographer Jens van Daele (Portrait de Jens). Another in memoriam could be found at the end of the striking dance film My own worst enemy, the third a final collaboration between choreographer Jelena Kostić and filmmaker Harrie Verbeek, who died earlier this year. 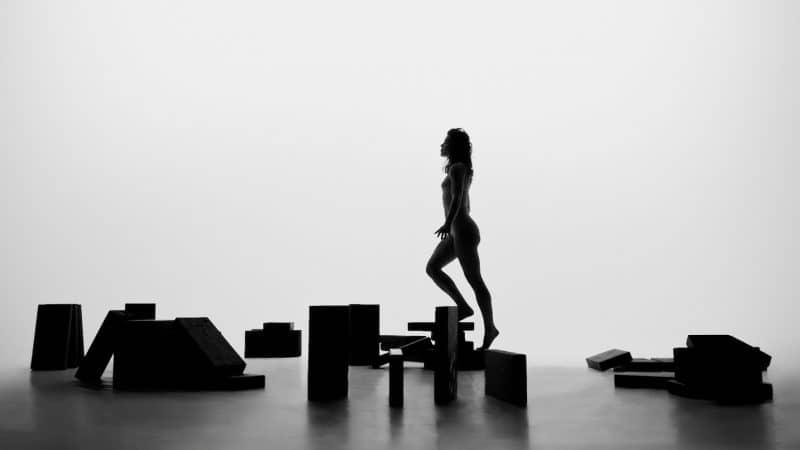 ‘My own worst enemy’ by Jelena Kostić and Harrie Verbeek

Virtual residencies
Instead of premieres there were virtual residencies, which came in different shapes and sizes. From preliminary studies, fragments, experiments, to a final, finished product.
REVOLT – The Manifest is only the first step for Cecilia Moisio, who won the Dutch Dance Festival Maastricht Young Audiences Award 2019 and the accompanying 10,000 Euros to make this piece. Likewise, the short film registration of Blurred Lines, a collaboration between Redouan Ait Chitt and percussionist Dominique Vleeshouwers, offered a taster of a full-length performance which will premiere in 2021.

This wide variety proved crucial. It was important to find added value in virtual residencies, to offer something more than straightforward registrations. One example is the aforementioned dansthuis.nl, where we ventured inside people’s homes. The same homely vibe was present in the Switch Stream series made by dancers of the NDT. The series started when Corona first hit, and dancers in lockdown made and performed their own choreographies from their own homes. In Switch Stream III, hosted by the affable NDT1-dancer Donnie Duncan Jr, most performances were streamed live from the studio, yet still retained most of its rustic charm, offering the audience a chance to see the dancers in a different, more personal, light.

A few residencies tried their hand at interactive features, for instance Peter Leung and dancers from the Junior Company and Dutch National Ballet. With his experimental outing The Same Space he offered viewers the option to switch at will between three different cameras. The end result was a bit choppy (the data stream of three cameras proved to be too much for my browser, even after the live-event was over). But more importantly, the experience still felt very static, like switching between different surveillance cameras. Which really is a shame, because Leung does have a deft hand at dynamic directing, as he proved with his direction of the above mentioned Blurred Lines.

As far as virtual residencies go, NDD saved the best for last. At the beginning of the festival Ann Van den Broek received a VSCD-nomination for best dance production for her piece Memory Loss. For her virtual residency she translated this eighty-minute production into a thirty-minute video experience called Memory Loss Inside. This time around, everything is seen from the performers’ perspective (each dancer wears a camera). During the filmed performance, the perspective constantly changes. Van den Broek uses this to full advantage, as in a moment where we are following the point of view of a dancer who disentangles him(or her-)self from the group and hurriedly runs behind the stage. When he (or she) returns, the whole stage is suddenly empty, as if nobody was ever there. Van den Broek makes the main theme of her work, Alzheimer’s disease, even more palpable, by making the viewer uncertain about where, and more importantly, who they are.

With Memory Loss Inside, Van den Broek meticulously crafts a new experience, something that both enriches the physical piece but that can also stand on its own. Van den Broek and NDD have outlined a future in which online dance presentations are not just watered-down substitutes but where they can co-exist peacefully alongside the physical performances.