Attending a performance by the multidisciplinary dance collective 155 is never a chore. Their fun-loving, high-energy shows are extremely infectious – pardon the pun. The secret of their success lies largely in the strong bond between the male dancers, most of whom have known each other since high school. At one moment in stuk, seen October 10 at Maaspodium in Rotterdam, it is even placed front and centre.

It happens during a short break (for the dancers, not the audience, as a helpful title screen explains in Dutch). The four dancers (brothers Erik and Thomas Bos, Rein Luuring and Sam van Eenbergen) start reminiscing about when they were younger. How Thomas discovered that by sticking a pencil (or another long, pointy object) up his nose he could force himself to sneeze. Thomas recalls an embarrassing chain of events in which a piece of his own excrement ended up inside his shoe. In a similar vein, Van Eenbergen relates a colourful visit to a very dirty toilet. And the friends dwell on two instances when the group and their friendship almost fell apart.

This last one harkens back to one of the denotations of the word ‘stuk’, which can mean a piece or performance, like the one they are giving; but it can also refer to something that is broken. Stuk is heavily influenced by Corona – this piece wouldn’t exist if it wasn’t for the virus and all its repercussions. It is about wanting to break stuff in a world that is already broken. Even friendships can break apart. 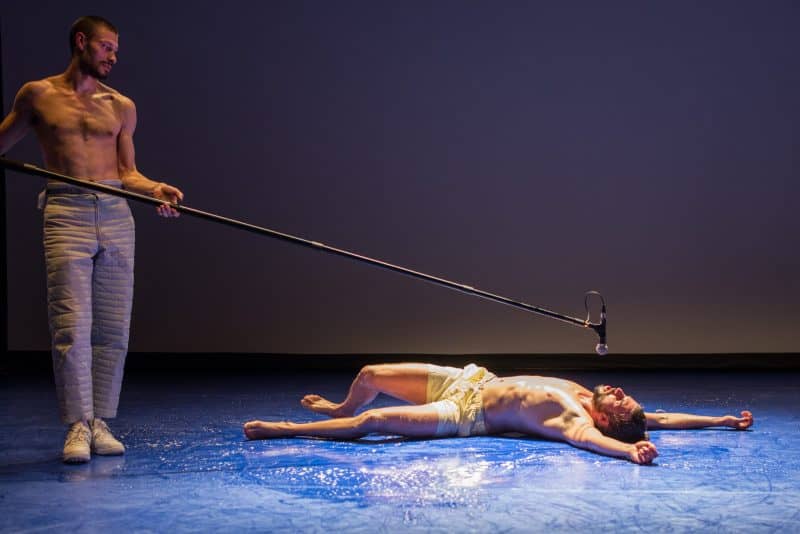 The piece doesn’t literally scream Corona, except maybe for the recurring act of deliberate sneezing (who’d have thought that sneezing could become such a revolutionary act?). Mostly the four men are contending with a more abstract, destabilising force. As is the case in Erik Bos’s solo, in which his lower limbs seem unable to hold him up. Or when all four men are dancing on a surface covered in dishwashing liquid, while proudly miming the words to Natalie Imbruglia’s Torn. Moments before, Thomas Bos had his own solo, slipping, spinning and falling, all the while talking about how he is supposed to take it easy because of a hairline fracture in his shoulder.

Every sequence deals with not having control, or losing it. Ironically, Controle/Control was a large ensemble piece 155 were planning to premiere if Corona hadn’t come around. One of the more literal moments is when Van Eenbergen is attached to two pieces of rope and is pulled to both sides (as in a tug-of-war).

Stuk doesn’t really have a clear narrative arc, but rather takes the shape of a compilation of choreographic sketches. One of the best ones is when the dancers create an optical illusion with the camera. All four are standing in a straight line, gently swaying. The camera is static and films them. But it is all coordinated and choreographed in such a way that it looks as if it’s the camera that is slowly moving from left to right, instead of the dancers themselves.

The piece, a co-production with Maas theater en dans, offers a welcome sense of release. The dancers’ happiness at being able to perform for an interact with their audience – at least for now –  is really palpable. With an even further tightening of Corona restrictions on the horizon, the reprieve may be short. One thing seems certain though: as long as the friends of 155 can stick together, they will probably be alright. 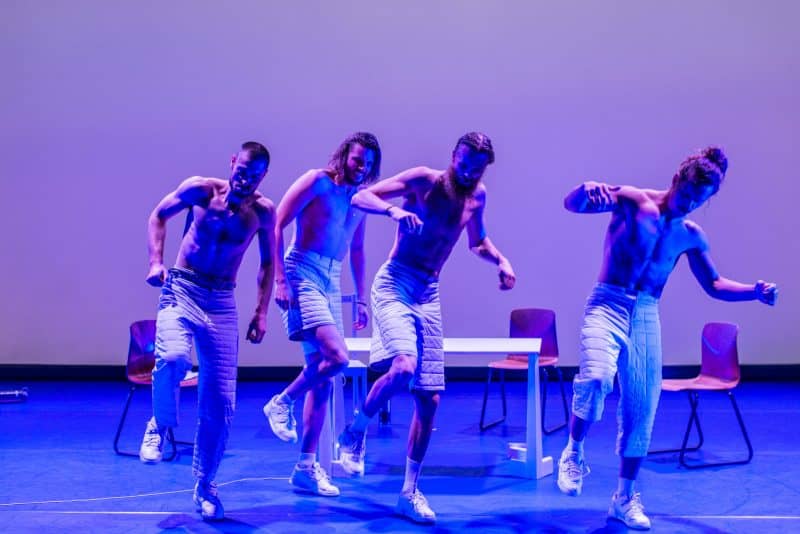