The daily decisions we make affect our lives, and the lives of those around us. Swan Lake by Club Guy and Roni – seen October 21 at De Oosterpoort in Groningen – places our choices, and their consequences, front and centre. The work exists as an online and an offline version, and the audience has a say in the outcome of both.

Besides being influenced by themes and music from the classic fairytale ballet, Guy Weizman and Roni Haver were inspired by the concept of a ‘black swan’: an economical term for an event that is hard to predict but has huge consequences. Examples are the Corona crisis and climate change. What choices do we make in times of crisis? How do we want this fairytale to end? The actual story of Swan Lake the ballet – about a prince who falls for a white swan princess, only to be tricked by a sorcerer into picking her black doppelganger (the black swan) – gets a bit lost in translation. Most of the time the link with the ballet feels tentative, with occasional bouts of recognition. The same happens with Tchaikovsky’s music, which has been repurposed by Swiss/Georgian composer Kordz.

The most important choice you make in the offline version is one you never even realize you’re making. Audiences are admitted in twenty-minute time slots. Each shift follows one of three set scenarios: swan, prince or sorcerer. The moment you choose your time slot, your scenario is set. You don’t hear which one you attended until the end. Mine was ‘prince’.

The performance takes us through different spaces in the theatre, from scene to scene. Three of these scenes highlight a different performer, depending on your assigned scenario. The black swan theory pops up repeatedly. In our first act in the ‘binnenzaal’, which is filled with mist, we encounter Angela Herenda wearing a polar bear suit (a reference to climate change and melting ice caps, a black swan event according to the makers). The prince (actor Sanne den Hartogh) makes off with a duckling belonging to her.

In the main auditorium we find a rambling Camilo Chapela, dangling precariously from a height, with dancers Tatiana Matveeva and Harold Luya and three members of Slagwerk Den Haag anxiously looking on. His  mumblings (‘nothing happened that didn’t happen before’) refer perhaps to the unpredictability of black swan events. In an intermezzo in the foyer, three members of the Poetic Disasters Club are dancing inside transparent containers, as if they were live samples in some exhibition. ‘Which role would you be playing in your own fairytale?’ the voice of Adam Peterson asks us over the headphones we are wearing. The prince’s self-pitying closing monologue, filled with excuses why he is not to blame for the mess he finds himself in, echoes common stances with regards to global warming: ‘I’m only small, I have no power, they said it was okay, it’s not my problem.’

The show offers only part of the picture, and a pretty scattered one at that. In my ‘prince’ scenario, the prince only makes a short appearance in the first act, is absent during the sequence in the main auditorium, only to return – without duckling – in the finale. Except for Den Hartogh and Sofiko Nachkebiya in the finale, the other parts seem pretty interchangeable, at least as far as narrative is concerned. My offline Swan Lane journey made me feel a little lost.

Just before the finale starts, the audience is asked to make a choice: do you want to go forward and look for innovative solutions? Or do you want to go back, to the way things were before capitalism and globalization fucked things up? Our collective choice decides how tonight’s offline story ends. 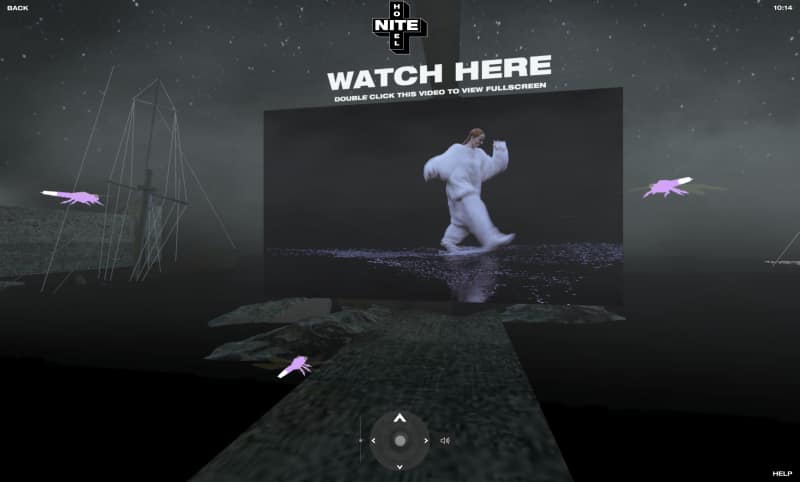 The central idea of making  decisions and having to live by them, only really comes into its own during the online version: Swan Lake The Game.

The structure remains roughly the same. The online version also works with shifts. But instead of following a set scenario, online visitors choose which ‘swan’ they want to see. Once chosen, you can’t go back. ‘Choose wisely,’ Peterson warns us in the voice-over. Instead of Herenda, you can see either Igor Podsiadly or Adam Peterson, two dancers who remained mostly on the sidelines in my offline version. The same goes for Matveeva and Luya in the main hall sequence. Each scene has its own virtual environment you can explore with different shots of the solo on different screens. You can also watch the whole solo as a dance film, neatly edited and fullscreen.

And here, too, the audience is allowed to influence the ending. There’s even the added bonus of choosing the performer: either Den Hartogh or Nachkebiya. While offline the outcome is a collective decision, online each individual decides for themselves. And what’s more, your choice also affects the offline outcome. The online decisions account for 50 percent of the vote – although online viewers never know the outcome.

The live show has the advantage of actually being there, on the spot, with the dancers. But the online version offers a more engaging experience, even offering a quickfire Back-Forward bias test, where viewers have to pick between different pictures (Cat person or dog person? Hierarchy or equality? Live performance or online?) All solos offer different flavours, and are interesting in their own right. For me, the ladies stood out: Matveeva ordering the two male dancers to stay away, to go further up, up, up in the grid! Nachkebiya as a gangster swan diva, with a cigarette between her lips, a gun (plastered with feathers) in one hand and a bottle of booze in the other, telling pianist Jochem Braat to play her something beautiful.

The online version also doubles as an interesting psychological experiment: with all these choices, the audience will always be left wondering: what if I had chosen a different swan, a different ending? In the offline version most decisions are out of our hands – with the ending being decided by majority vote – which means there is less focus on what could have been.

The lack of narrative propulsion is a less pressing problem in the online version, which, apart from the final choice between ‘forward’ and ‘back’, is more about the experience than about story. An experience people want to see over and over again, evidenced also by the comments left on the virtual wall at the end, saying they want – and went – to see the online version a second, third or even fourth time. Just to see all the possible permutations. That is the kind of publicity money can’t buy.