The nice phonetic ring of the A’s put together should not have been enough to justify the choice of words for this title: Amazing Asia, seen October 24 at Stadstheater in Arnhem. Compounded with the written introduction to the programme, swamped with similar generalisations, the program’s title reveals a form of superfluous naiveté that speaks poorly of Introdans as a leading Dutch dance company.

Kaash, premièred in 2002, was the first full-length piece Akram Khan created, and the one in which he discovered the possible depths of his choreographic approach, here conjured together with composer Nitin Sawhney and visual artist Anish Kapoor. Kapoor’s impressive light square on the backdrop (changing from intense red to intense black as the piece moves on) almost engulfs the dancers, creating a sense of urgency that can be read as the presence of death. The uneven number of dancers doubles up on this tension: Five, two male and three female. An uneven number implies an overall sense of something being off at all times. For the first part of the choreography, for example, one of the male dancers stands still, facing the black hole in the back. Questions arise, symmetry is made impossible, the eye of the viewer is awake and sucked into the action.

If Kaash is visually strong, Sawhney’s sound score stirs the sensory pot with even more verve. We hear a recorded voice singing rhythms: “taki taki taki taki ta ta ta taki taki taki ta!”. A feeling of vertigo accentuates the challenge Khan’s choreography poses to the dancers: they have to get there, both in terms of space and of movement, in time. Again, a sense of urgency, again, the tension between the energetic excess of Khan’s style – a celebration of life – and death with the tempi licking the dancers’ heels as they relentlessly rush across the stage.

But Kaash, as danced by Introdans, reveals another problematic topic, this one related to the notion of repertoire. Even if it shows they do their best, the dancers fail to deliver Khan’s idiom – a contemporary derivation of the classical Indian dance form Kathak – in a convincing way. Sure, there are moments, and Angelica Villalon manages to organically combine flow and attack into the swirling continuum of energy that has rendered Khan’s company famous. Overall, however, one wonders: what is the added value of obtaining a piece by Akram Khan, if external factors such as rehearsal time don’t allow for the dancers to make this particular dance idiom – not just the moves – their own? 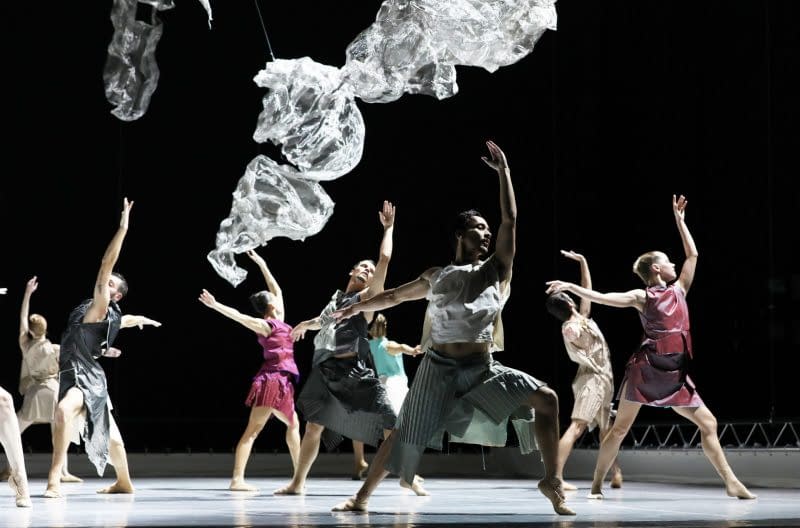 The link between Asia and Regina van Berkel’s in a reflective landscape is to be found in the music, and loose elements within the costumes and the set. Music by, among others, composer Zhou Long and violinist and composer Yi-wen Jiang (both celebrated for doing with sounds from their chinese heritage what Akram Khan does with Kathak) is played live onstage by the Van Dingstee Quartet. Their presence and interpretation – together with the set designed by Dietmar Janeck – formed the highlight of the second part of the evening.

At the beginning of the piece, the light-grid hangs low over the performers’ heads, revealing the often impressive dark tower that exists beyond it in many venues. Beneath the grid, a white cloth surrounds the white floor and defines the dancing arena. Four transparent and lightly structured columns of metallic mesh worm their way diagonally from this low ceiling to the floor, resembling four columns of smoke. Incense, as Van Berkel reveals in the mandatory Introdans video shown during the intermission, was one of the inspirational elements drawn from her vaguely introduced research into oriental cultures during the creation process.

As the grid progressively lifts, the white walls win it over from the darkness above, and the whole space becomes lighter, but also colder. The charming effect of the first visual setup gives way to a more conceptual reading of the space. The sixteen dancers’ dance doesn’t change: they step in and out in different combinations, openly smiling and moving in a way that reveals an influence of Forsythe’s improvisational technologies, a composition strategy Van Berkel knows well. But here, the quick and constant shifts in direction of different parts of the body, counter-intuitive moves and uneasy lifts contrast sharply with the vague idea of harmony one came to expect from the introduction video, the set design, and the music.

Actually, the increasingly neat spatial design and this contrast between physical language and overall feel turn the piece into something closer to a collage, rather than a landscape. In a collage, different objects are stripped away from their context and set to interact in a new form. The purposelessness of that happening, as Cage and Cunningham would have it, renders the collage interesting. The problem, here, is that in a reflective landscape is presented as part of an evening where context is what is being celebrated – albeit in a problematic, nonchalant and over-generalized way.

What were Van Berkel’s specific sources of inspiration? Which corner of the Asian world was given a western, contemporary twist? The wrapping designed by Introdans made it impossible to overcome these questions, regrettably turning the work into a patchwork of loosely recognizable references similar to some of the costumes the choreographer designed for it. Fragments of cloth sewn into unclear shapes, each fragment a different colour: hot pink, pale green, light blue. A reference to the palette of a traditional chinese gown? It’s impossible to know. And this not-knowing, in this context, reads as another sign of questionable shallowness, regardless of the intent.

Then again, I am not an expert in this field. I, too, have a long way to go in my dealing with concepts such as otherness or alterity. That’s why, in this regard, I chose to remit myself to the words of others such as French-Indian poet and dance-producer Karthika Naïr. When discussing Sadler Wells’ program Out of Asia 2 in 2012, in combination with Akram Khan’s description of the Asian body as being “inherently spiritual”, she wrote in her article Six – or More – Degrees of Otherness: “How could Asia – which contains nearly fifty countries, every major world religion (including Communism), and a few hundred languages – be distilled into such a homogenised brew?”.