In Shameless, longtime ICK Dans Amsterdam performer Victor Callens takes the stage. Callens joined the company at the age of seventeen and  this portrait of a dancer as a young man comes a decade into his career. Shameless premiered on 12 September at the Meervaart in Amsterdam.

During the show, Callens’ presence on stage is counterparted by his younger self, filmed by Bram Vreeswijk in 2012. Slightly hesitant, trying to find the right words, it gives an insight into the ideas and motivations in those early stages of the dancer’s development. The short clips, woven into the action on stage, often fade into a stuttering image, as if the past keeps shimmering over the stage.

Shameless addresses what it means for a young artist to step into the limelight. The piece deals with ambition, fame, opportunities and the question who the dancer is doing it for. In a chain of short segments Callens dances, sings and performs. The classically trained dancer lets go with full force in front of a tv-set in recognizable poses and jumps. An even more personal note follows when we get to see him moving like a snake, a personal motif and inner motivator that charges him with hidden and contradictory energies, as we learn from the video.

At other times, the movement material is clearcut ICK vocabulary. Some of these images have been traveling along through several company shows, such as when Callens lies on his side, stiff like a plank, with a striking alertness. Or when he raises his arms in sharp corners above his head and swings them sideways. Vintage Greco and Scholten is the material in which fluidity and breath take over, when his tall body towers over the stage, absorbing the space around him, his energy overflowing.

The matured dancer Callens has turned into an engaging and powerful stage presence. Above all, he is in control and having fun. 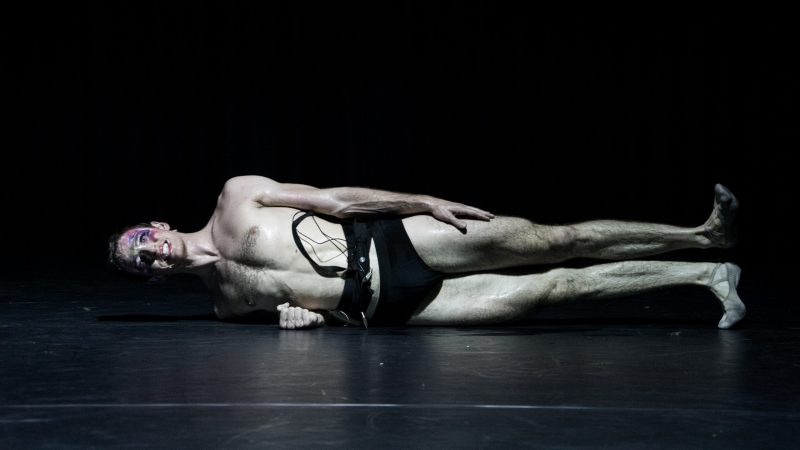 The musical choices range from a bombastic Vivaldi composition to popsongs from around the turn of the century. The recurring Lose yourself by Eminem emphasizes the lyrics: You better lose yourself in the music, the moment … This opportunity comes once in a lifetime, a reference perhaps to grabbing fame.

When the back curtain opens, the tall windows of the Meervaart theatre reveal a view onto the street where a tram passes. Callens waves excitedly to some surprised faces passing by soon after. Like all other references in the show, this can be seen as a nod to an earlier ICK show, in this case the highly acclaimed duet Sweet Like a Chocolate (2019). Whereas in that show, Callens – completely unrecognisable in black clothes from head to toe, an invisible man – began the show by closing the windows, here he opens up to the world and invites people to see him. And to get to know him.

The dancer may be alone on stage, the program sheet states that Shameless is not a solo, to emphasize it is a joint effort. And it is true that the space is filled with other presences besides Callens: the choreographers Emio Greco and Pieter C. Scholten. The latter (in collaboration with Avishai Darash) is also responsible for the sound design. This, plus costume design and technical support, adds up to create this collaboration. In this respect Shameless shows a development that is strongly interwoven with Callen’s engagement with the company.

In Shameless Callens dances, performs, and transforms. Ultimately, the most profound insight to be taken away from the show is what we learn about Victor himself. The most notable example is when he speaks of unlocking things inside his body to reach new depths. In the end, what the piece tells us is that a dancer’s career is not about fame. It is about exploring that state of being underlying the ultimate claim to fame: what does it mean to slip into and out of a performative state? To be reborn?