Corona is having a devastating effect on our cultural landscape, one that will be felt long after the virus itself has receded to the background. But, as with most catastrophes, it has also given birth to shows and experiences that would otherwise never have been. Blindness – seen October 31 – a ‘socially distanced sound installation’ that admits 30 people at a time over multiple shifts, is probably one. Its unlikely setting: Koninklijk Theater Carré.

This juggernaut of a venue, with 1756 seats the biggest theatre in Amsterdam, is a far cry from the venue where it premiered earlier this summer, 251-seater Donmar Warehouse, one of the smallest black box theatres on London’s West End. But Blindness, directed by Walter Meierjohann, is a production born for international travel during Corona. All you need is some chairs, headphones, a collection of fluorescent tubes and last, but certainly not least, the soundtrack, voiced by actress Juliet Stevenson.

The beginning mimics the surroundings of a black box theatre. The audience is seated on the stage, on chairs that come in clumps of two. The view of the arena, the place where the audience is usually seated, is blocked by a fire curtain. Fluorescent tubes (lighting design by Jessica Hung Han Yun) hover in a labyrinthine pattern from the ceiling.

Blindness starts almost as an audio book, with Stevenson – no stranger to book recordings – reading from the very first chapter of José Saramago’s novel (adapted by Simon Stephens). It’s a recounting of the first incidence of a person suddenly turning blind, while waiting for a traffic sign to turn green. The contagion spreads quickly from patient zero to the ophthalmologist who examined him, to the patients in the waiting room, to the good Samaritan who brought the first victim home – and then stole his car. 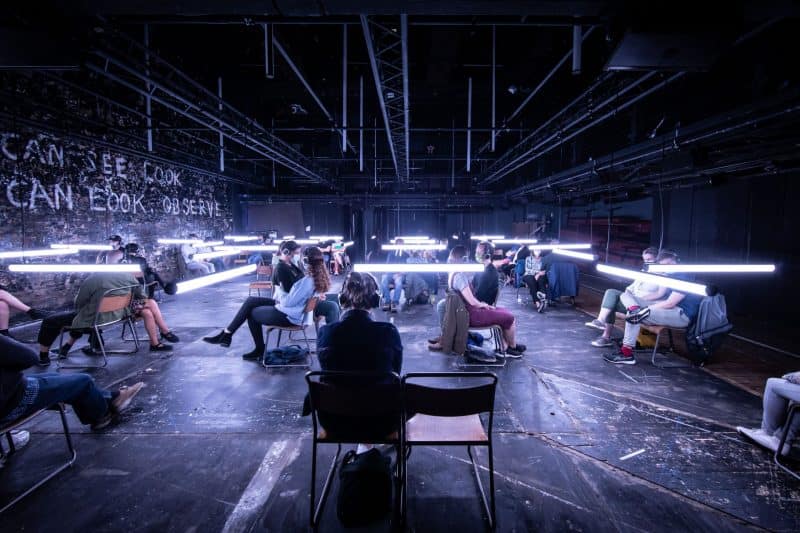 During all this, we in the audience can still see. Fellow visitors loom in the darkness as faint islands of light. The lighting overhead accentuates parts in the text: amber and green for the traffic lights, a rippling wave of red accompanied by a menacing piano chord whenever the next person falls victim to a milky white blindness. Then, after Stevenson recounts how the ophthalmologist and his wife are being picked up by an ambulance to be taken to an unknown location, all the lights go out and we, too, can no longer see.

From that moment onwards, the audio book seamlessly transforms into a radio play, with Stevenson turning from narrator to the eye doctor’s wife, the only person spared by the ‘White Sickness’. What follows is an ingenious piece of audio theatre (3D sound design by Ben and Max Ringham), occasionally punctuated by short flashes of blindingly bright light, where it really feels like we are actually with her in the room. One moment she is whispering urgently into my ear, as if it were her husband’s. The next she is out and about, inspecting the new surroundings (a former insane asylum). Stevenson’s performance is a tour de force, as her character desperately tries to hold it together while the situation inside the hospital, where all the blind people are dumped, left to fend for themselves, becomes increasingly dire. ‘It can’t last, can it?’ she asks us desperately.

A play about a global pandemic during an actual global pandemic, how can it not resonate? Saramago shows us how easily society crumbles, how easily we lose ourselves when our day-to-day lives are disrupted. Still, both this piece and the book find small glimmers of hope in the ability to feel grateful for things you always took for granted: a box of matches at just the right moment, a bout of pouring rain to cleanse the body, and the soul.

One of the most awe-inspiring scenes is one that wasn’t in the original Donmar production, one that can only be pulled off in a theater with a proscenium stage – each version has been adapted to fit its specific venue – where I was suddenly made profoundly aware that I was one of only thirty people in a huge empty theatre.

As I walked out – though the staff entrance – I felt conflicting emotions. On the one hand I felt blessed to have been able to experience this moment, on the other hand I hoped the end of this pandemic is in sight. It can’t last, can it?