Giving up-and-coming artists an opportunity to show their work to a larger community has probably never been more crucial than during this Corona crisis. With the 2020 edition of Here we live and now, seen November 21 at Korzo Theater, Korzo and NDT showcase the works of three locally grown artists. In the pieces by Zahira Suliman and Lea Ved, bodies are looking for (re)connection, while in Spencer Dickhaus’ piece, they seem stuck in a memory loop.

In her second outing for Here we live and now, choreographer Zahira Suliman takes the stage with Christie Partelow for her duet Anything but Opposites. At the start, the two are mere shadows, one standing behind the other. Both stay in place, their bodies making circular motions by bending through their knees. Most of the time they move in sync, but occasionally one of them breaks ranks, either going faster or slower than the other, or by suddenly flinging out an arm, then pulling it back in again. It reminded me of watching two frequencies in an oscilloscope.

Over the course of the performance the two bodies slowly pull apart. For a while they remain connected through their hands, helping each other keep their balance. But the break becomes more permanent, and each dancer goes their separate way. When the two bodies meet again after some time, something is different. Now, when their hands touch, it is not for support. One body has become an anchor that holds the other back in an iron grip. In the duet Suliman has gone looking for harmony between opposites, she tells us during a brief after talk. How to unify two bodies, while allowing them to be different?

Unity and harmony are a long way away for the two dancers in darling we’re nowhere but here by NDT-dancer Lea Ved. From the beginning, something is off with dancers Alesya Dobysh and Simon Bus. They are both standing near the front of the stage, slowly being blown back by a bleak wind. They are moving in fits and starts, as if each muscle moves on its own accord instead of as part of a fluent whole. Things get even more awkward when both bodies meet. It is clear they are a unit, but there is nothing comforting about seeing them together. Their bodies connect, but there is no real connection, more a bumping of bodies than an actual embrace. Even when they are lying down, with the woman’s leg wrapped around the man’s body as if they were cozying up in bed, you can almost hear the man counting off the seconds in his head until cuddle time is over.

What impressed me most was that, even though I didn’t know beforehand what the piece would be about, I could intuit it. It is a story about now, about living amid a pandemic, about being and feeling stuck in a place and a situation over which you don’t have any control. I understood it, not because it was spelled out, but because the performance perfectly captured that nagging feeling of constant restlessness, of overwhelming powerlessness. 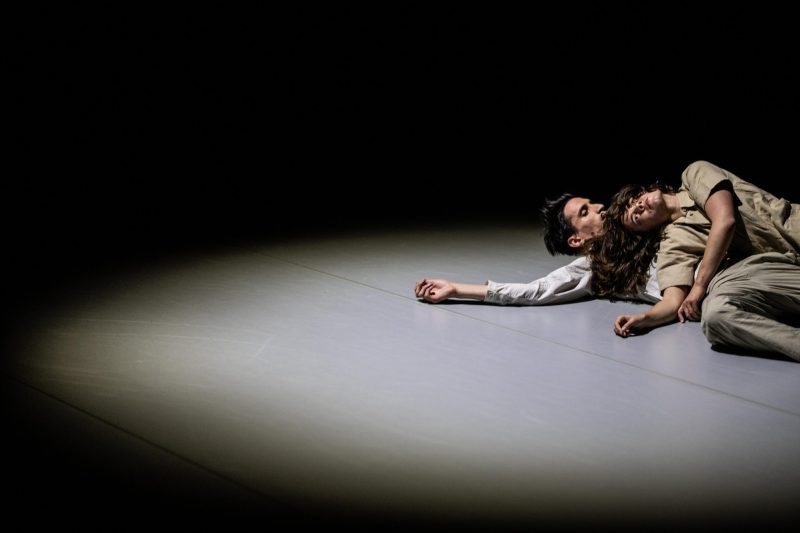 The predominating feeling for Uhgen and Uhgain and Again, made and performed by former NDT-dancer Spencer Dickhaus, is one of puzzlement. One man enters and sets the stage, literally. The microphone goes at the back, a cardboard cutout goes near the front, the man lies down near the middle. A second man enters and reorders the scene, then a third. Finally, all three (Luca Cacitti, Shay Parush, and Dickhaus) come to rest behind the cardboard facade. Uhgen and Uhgain and Again keeps retracing its own steps, even before it has really begun. In a subsequent sequence, the three men start dancing, one by one as in a relay race, to Barber’s Adagio for Strings. They begin and end in almost the same position: on the floor, as a fallen soldier.

Dickhaus wanted to examine the concept of memory and the way different contexts can (re)shape it. At times it feels like he is reaching for the absurdism and theatricality of the pieces Johan Inger made for NDT. But it’s not yet as crisp as these works. The recurring gag in which the dancers seamlessly switch places behind the cardboard cutout, would have been much stronger if the twilight on stage hadn’t made them almost indistinguishable from each other.

I have to give him this: the performance is definitely not business as usual, especially the ending where Dickhaus is lying on the floor, lip-syncing to Rita Ora’s Ritual. But it’s a piece that needs more time and space to breathe. 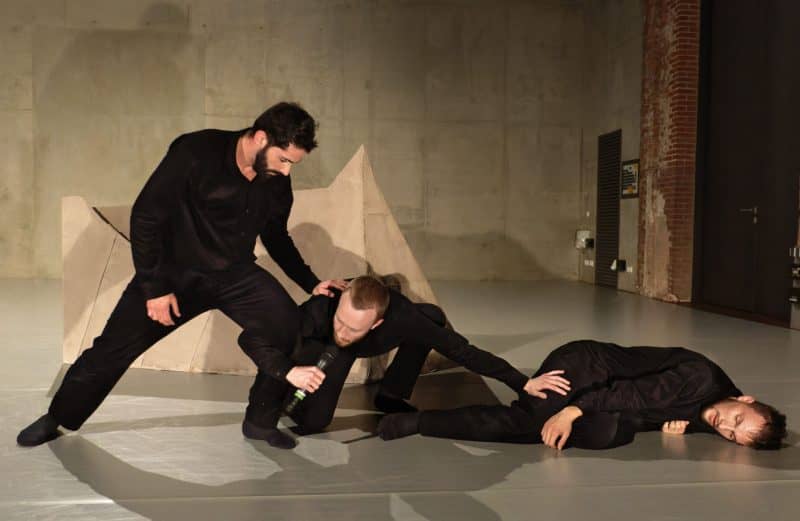 Here We Live and Now