Samir Calixto’s Seeker/Solo comes accompanied by an old-fashioned letter. Long. Warm. A personal manifesto of sorts. As Lisa Reinheimer did in her wandering state of the dance during the Nederlandse Dansdagen, Calixto brings the matter of trust in the current cultural climate to the fore. How can one trust a system that doesn’t get what you do? To dance is to seek. To be a seeker, Calixto says, is “to understand the necessity to ‘die’ so a kind of rebirth can take place”. A purpose out of needed and essential purposelessness. Seeker/Solo: an elegant act of rebellion, seen November 25 at Theater Witte de With in Rotterdam.

Calixto moves in several lengthy movement phrases – small physical journeys, each with a different quality determining the quest. If in one the tremor of a hand is the thread binding movements together, in another the focus lies on the contraction and holding of muscles, an effort guided or maybe even triggered by intense and explosive breathing. Calixto is committed, he dives into each exercise calmly, taking the time to transition from one state to the next. His searching in every quality is actual, present, and enticing.

The density of his presence is enhanced by Pavla Beranovà’s light design. Actually “designer of darkness” would be more accurate in this case. As lone spotlights draw lines and circles in an otherwise black and empty stage, we are thrown back to a time when a single candle light was precious, and in that dark landscape, combined with a clever use of theatrical smoke, Calixto’s hoped-for sense of initiatic ritual is beautifully achieved. Everything seems ancient in the quasi-dark. 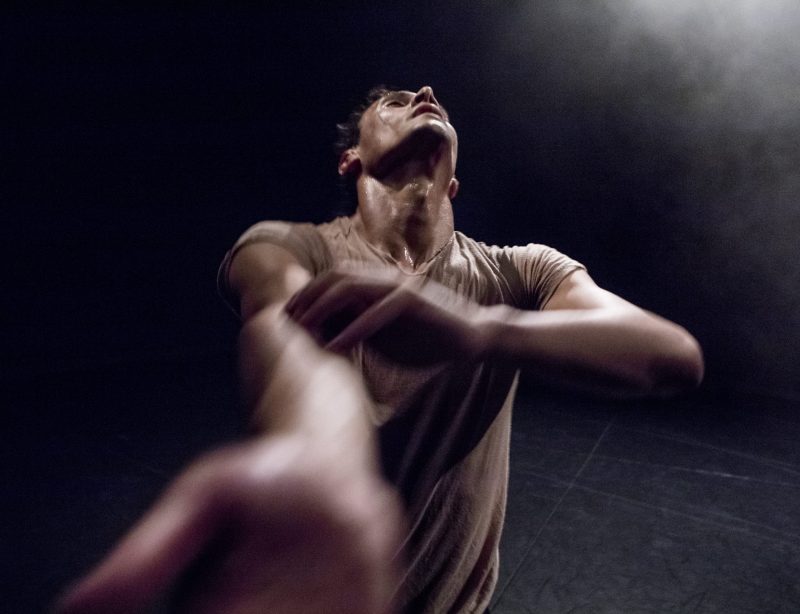 The game with light also carries the dramaturgy of the piece, as in every new scene it organises the space in which Calixto moves in a different way. The lines and circles invite metaphoric readings: straight lines resembling outlines of mountains in a desert; a single circle of light on the fabric at the backdrop of the stage, a solar eclipse. It doesn’t matter if this was the intent or not. To look at something is also to seek, and Calixto’s solo feels like a gentle invitation to give wings to one’s own imagination.

It all bathes into – or stems from – the equally simple yet utterly powerful modernist piano compositions by T. de Hartmann. In an extraordinary collaboration with Greek-Armenian spiritual teacher G.I. Gurdjieff, De Hartmann translated the latter’s music to European notation in the 1920s, a music found and composed during decades of travelling through the Middle East and Central Asia.

To his credit, Calixto hasn’t edited the chosen melodies, and names the pianist Alain Kremski in the programme. Because in Kremski’s stretched-out version of the scores, we feel their original meditative depth. In the negative space between the notes, we are allowed to revel in resonance. Just as the breathing is paramount to the texture and quality of Calixto’s movement. Just as the light seems to come only from the acceptance and the embracing of the dark.