Fantasia, seen November 29 at Stadstheater Arnhem, is Introdans’ first family focused programme of the season. The company gives Alexander Ekman’s WHIM a second chance to shine, but its Introdans premiere of Alwin Nikolaïs Gallery might be a bit too trippy for a younger audience.

I have a deep fondness for Introdans’ family friendly shows. From the very beginning, artistic director Roel Voorintholt has demonstrated that dance doesn’t have to be childish in order to be enjoyed by the whole family, while introducing young audiences to works by renowned choreographers like Jiří Kylián, Hans van Manen, Ohad Naharin, Mats Ek and Nils Christe. Often, these works haven’t even been made with a youthful audience in mind. As is the case with the piece WHIM, Fractured Fairytale which Alexander Ekman originally made for IT Dansa. WHIM was also part of last season’s programme Gek Gezicht, but due to COVID-19, it was only performed twice. Just as the title implies, WHIM is filled with whimsy. Chairs play an important part, as does classical music by Vivaldi (The Four Seasons) and Ravel (Bolero). Ekman effortlessly mixes everyday movements – coughing, bickering – with his choreography, making it a performance for all ages. 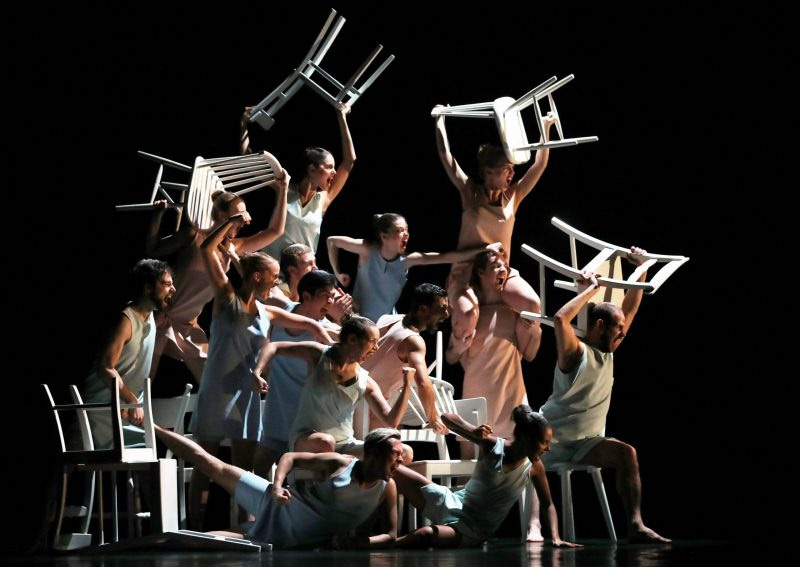 I’m not sure the same can be said for the Introdans-premiere of Gallery (1978) by Alwin Nikolaïs. Counting Gallery, Introdans now has twelve pieces by Nikolaïs on its repertoire, most of which have been included in family programmes. I can certainly understand the appeal. His works are visually very striking – Nikolaïs did almost everything himself, from the choreography to the costumes and from the sets to the lighting. I can still distinctly remember one of his first pieces performed by Introdans, Tensile Involvement (created in 1953), which featured huge ribbons suspended from the ceiling that were continuously twisted into new shapes by the dancers in action below.

Gallery certainly is colourful, maybe even the most colourful of all the Nikolaïs pieces on Introdans’ repertoire. The stage has been transformed into a giant shooting gallery at a fun fair. Two rainbows stand out looking like a pair of eyes near the back; the rest is black. A blacklight makes the colours pop out even more. A series of brightly coloured bull’s-eyes appear from behind a black partition. Loud bangs can be heard on the soundtrack (also composed by Nikolaïs). Then the first dancers appear, each shooting upwards like a Jack-in-the-box. They start moving from one side of the partition to the other, popping up and ducking down, like ducks in a row, wearing glowing masks and fluorescent ponchos.

The piece feels like a sensory overload, with its fluorescent colours and omnipresent soundscape (Nikolaïs dubbed his musical accompaniments ‘choreosonics’), with bangs, noises, mumblings, and (for that time) futuristic electronic beeping. It’s like a psychedelic acid trip, both entrancing and slightly disturbing. It reminded me of the Pink Elephants on Parade sequence in Disney’s animated feature Dumbo from 1941, where a drunk Dumbo starts hallucinating rows and rows of pink elephants. The elephants’ hollow-eyed stares are not very different from the impassive faces of the performers here. A sequence in which two dancers seem to be made up entirely of heads echoes a similar scene in Dumbo.

One of the most nightmarish apparitions are two performers with clown faces whose bodies look like huge purple/black security blankets. The maniacal laughing on the soundtrack doesn’t help. At the end the dancers return to the shooting gallery, where their heads seem to be blown to pieces.

Gallery is certainly quite the experience – my 17-year-old self would have loved it – but may prove a bit too intense for younger children. 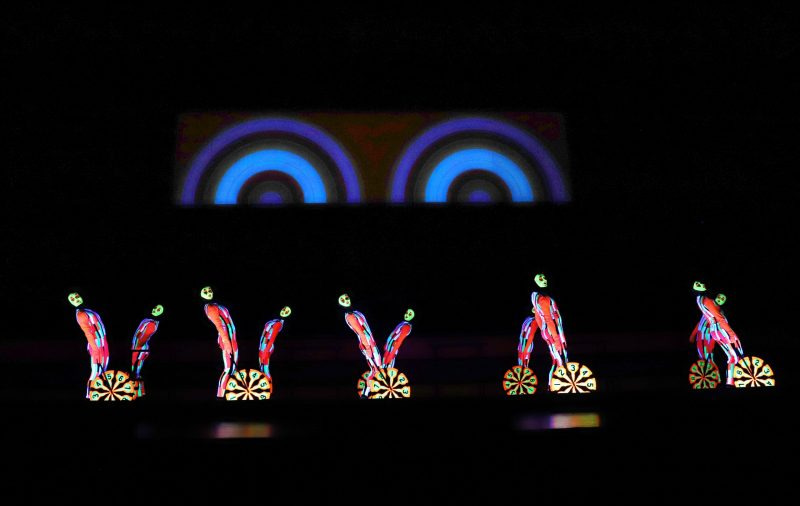