At the end of its twentieth season, dance company Don’t Hit Mama will cease to exist in its current form. Dance maker/performer Nita Liem and dramaturgist/ writer Bart Deuss kick off their company’s anniversary season with their show Asian Celebration – seen November 19 at Stadstheater Arnhem – and the photo exhibition Family Portraits – visited November 27 at Gallery WM in Amsterdam. They will serve both as anniversary celebrations and as a farewell tour.

Twenty years ago, Liem and Deuss started Don’t Hit Mama with one main goal: to put hip-hop dance theatre on the map. They incorporated hip-hop and African and American dance styles into their shows long before it became mainstream. Don’t Hit Mama targeted young, teenage and adult audiences, worked with amateurs and professionals, and with urban dancers alongside classically trained ones (Zwanenmeer/Bijlmermeer II). Don’t Hit Mama even organised theatrical club events in the Netherlands and in New York. All happenings are part theatrical events and part social encounters, with hip-hop as its beating heart.

Over the past five years Liem, born in Indonesia in 1962, has also started to more intimately explore her Asian dance roots in her work, with the help of her dance teacher Sonja Bloem. Poppin’ Java in 2015 was a meeting of hip-hop and Javanese court dancing. With Asian Persuasion #1 (2016), Don’t Hit Mama delved into the personal stories of Asian migrant families. Asian Celebration is a continuation of this personal exploration. It explores not only Liem’s own cultural heritage, but also those of the five other dancers, ranging in age from 21 to 64, and of Deuss, who is the narrator. All share an Asian link, even Deuss, who was born in Friesland, but passed a large chunk of his childhood in Indonesia and Dutch Guiana (now Suriname). Gi Au-Yeung hails from South China and Delphine Nguyen’s parents were refugees from Vietnam.

Four dancers have roots in former Dutch colonies: Liem, Sonja Bloem and Clinton Mansyur in Indonesia; Rajiv Bhagwanbali in Suriname (Bloem and Bhagwanbali also performed in Poppin’ Java and Asian Persuasion). The show is rich with personal stories and anecdotes, all told in Dutch and in first person by Deuss, interspersed with short choreographies. Deuss recounts his first dance steps during an Indonesian dance class, then takes a seat while the four women start a traditional dance. Bhagwanbali reimagines an Indian myth (his great-grandfather came from India) as a manga story, with a blind scientist and a double-crossing robot.

A character in and of itself are a dozen family portraits, blown-up to huge proportions and printed on sturdy canvas. They are used as props throughout, hoisted around like a yoke, wrapped around the body of a dancer like a shroud. Nguyen is rolled inside a picture of her parents as if she were a spring roll (a traditional Vietnamese spring roll made of rice paper, mind you, not the deep-fried concoction the Dutch call ‘Vietnamese loempia’). 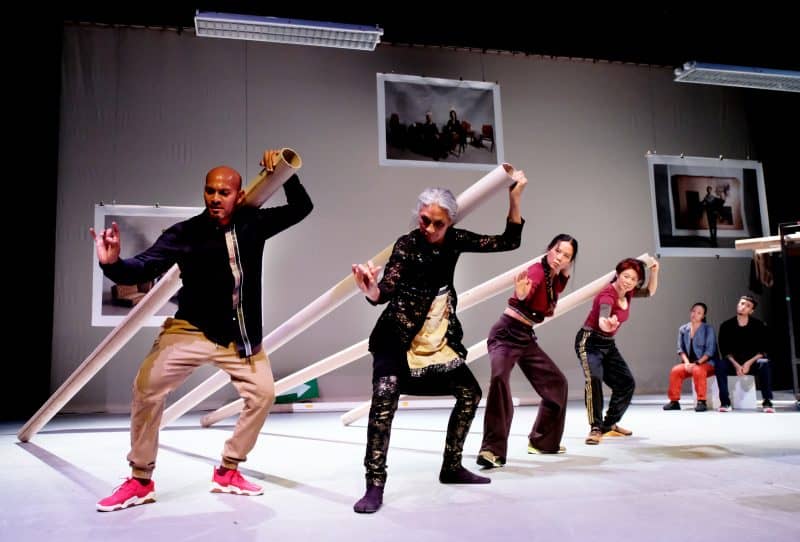 These same pictures and stories take centre stage in the photo exhibition Family Portraits, which you can visit for free at Gallery WM in Amsterdam. The exhibition is centred around the families of three of the dancers – Liem, Bloem and Bhagwanbali – whose stories also form the heart of Asian Celebration. The pictures are both a combination of snapshots from family albums and staged photographs by Michiel Voet (whose grandfather lived in Indonesia, then called Dutch East Indies). There is one in which Sonja Bloem is being carried by her son, against a backdrop of an enlarged photo-album. There is another with Nita Liem’s parents sitting on chairs with great bell-jars on their heads.

The exhibition gives you more time to really soak up the richness of their migration stories (English handouts will be available). Some of these stories have already been told during the performance, but there it was a lot to take in, and the personal experiences tended to blend together, I think partly because they were all conveyed by the same narrator. At the exhibition we learn that Liem comes from a line of Peranakans, Chinese families who had been living in Indonesia for many generations, and that she was born as May Yun Liem. We also discover that Sonja Bloem’s great-grandmother was a Dayakan princess. 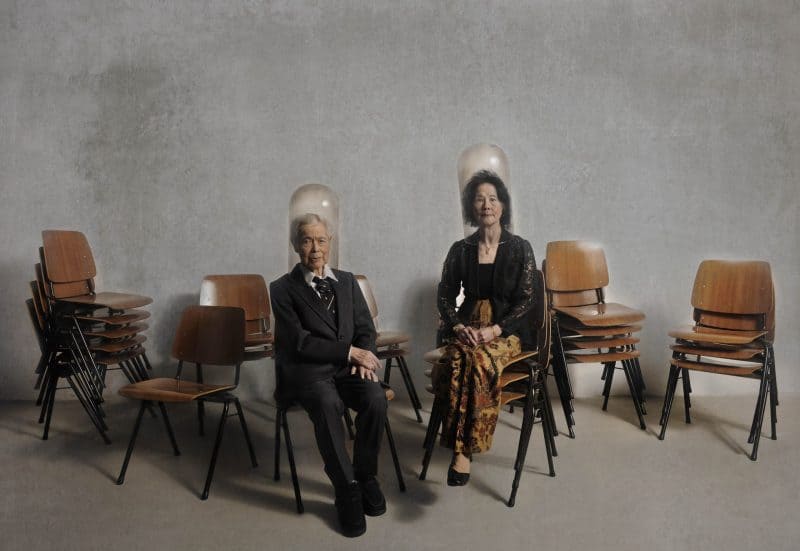 At the exhibition opening, Liem performed a solo, based on traditional Javanese court dance – while wearing a gold-striped track suit and sneakers. Liem has always been a compelling hip-hop dancer, but here she is truly mesmerizing. The poise and control of the body, the slight bobbing of the head, the delicate but surgically precise hand gestures, as if she is holding an invisible thread between her fingers. Slowly she walks through the gallery, gazing at the pictures, flicking her scarf.

Even though Don’t Hit Mama will stop, fear not: this is not the end. Liem and Deuss wanted to break free from the grind of the subsidy mills, in which all work has to be planned four years ahead. They want to use their twenty years of experience to work on different types of art projects, and to pass on their knowledge to younger generations. As Liem herself has put it: “We needed to stop to move on.”