Ticketing service Dice.fm is building an extensive platform to host live music events now that the pandemic is keeping everybody housebound. This weekend David Bowie’s final project, the music theatre show Lazarus, which was filmed during the show’s London run, was streamed several times. The event marked the fifth anniversary of David Bowie’s death. I watched the stream on Saturday, 9 January.

It was the second time I got to watch the show; in 2019 I saw the Dutch cast perform it at DeLaMar Theater in Amsterdam. The stream features the London cast, with Michael C. Hall in the leading role of Thomas Newton. ITA director Ivo van Hove was hand-picked by Bowie to direct the show, the design is by Van Hove’s collaborators Jan Versweyveld (scenic and lighting design) and Tal Yarden (video design). The story in short: Newton is a man who fell to earth, an alien who cannot return to his home planet, but wants nothing more than to leave this place now that his great love Mary Lou has left him. His housekeeper has her own problems but when she finds Mary Lou’s clothes, she restyles herself as his lost love, and falls mysteriously in love with him herself. An angel arrives, and a devil. Who will win? 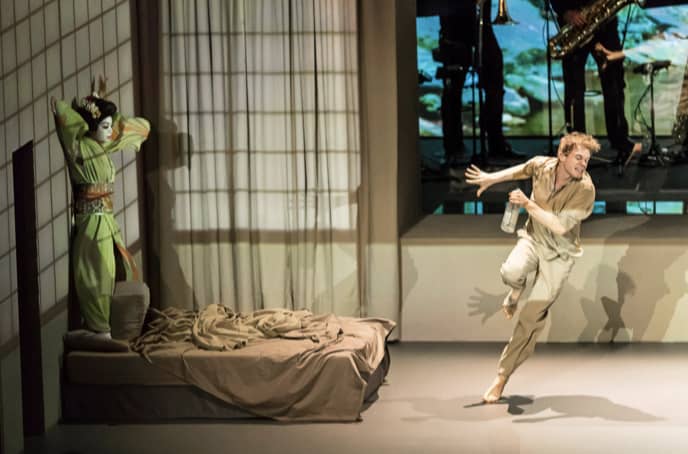 The recording, directed by Nick Morris, breathes the atmosphere of a film, rather than a registration of a live theatre show. What must be multiple cameras seek out interesting angles to aid the scenes and guide the viewer. Except for the mics taped to the actors’ faces, you’d almost forget you were watching a show. That sense of loss, of not actually being in the auditorium that viewers of theatre streams are no doubt by now familiar with, is therefore largely absent. Close-ups are used to good effect and bring us almost into Newton’s restless mind. A crazy, Hitchcockian diagonal camera angle underscores the tension in the scene where antagonist Valentine pins him to the wall with his menacing demeanour.

The band plays the show’s 18 songs fantastically, with arrangements that shine a great new light on some of the older songs. Michael C. Hall is every bit as good as the press from 2016 promised, emulating that stirring pull towards danger or even hysteria that Bowie’s voice had in his best songs, and the striking Sophia Anne Caruso gives a wonderful clarity to This Is Not America and Absolute Beginners. Michael Esper emanates a frightening yet thrilling bloodlust in Valentine’s Day.

As soon as one of the songs sets in, I’m transported, as I was at DeLaMar in 2019. The performers, propelled by the band (headed by Henry Hey), take wing. They soar high above the thing that this musical, live version and stream alike, suffers from: the story is muddled and there are several characters whose purpose is unclear. You need to know Newton’s back story beforehand, in order to understand his despair. If you haven’t seen The Man Who Fell to Earth, or read the book, you will struggle to feel for the protagonist. There are some surplus characters that don’t really add a great deal. Who is Michael, and why is he here? Who are the dancing couple?

But it was Bowie’s final project, which when it premiered, we didn’t know. And then he died, which changed everything. Musically the show is truly great, and the performers are all fantastic. The design is impeccable. The show just feels more like a concert with a storyline thrust upon it. If you get a chance, watch it and crank up the volume when the band begins to play. 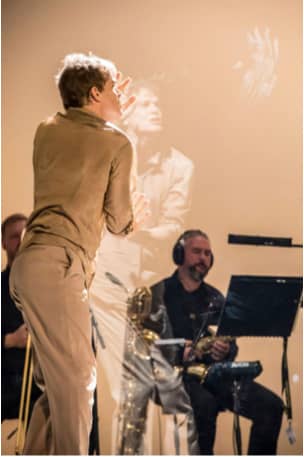