The twentieth edition of CaDance Festival went through several different iterations as the corona restrictions toughened: from being one hundred percent live at Korzo, to live with an occasional livestream, to completely online. The opening show was the online premiere of Sonatinas 4 Feet by Duda Paiva Company and Fractal Collective, on 28 January.

The online performance of Sonatinas 4 Feet has one major perk: it was preceded by a short, but very enlightening, making-of. In it, the Dutch-Brazilian puppeteer and dance maker Duda Paiva talked about his primary inspiration for the piece, the life and art of Alair Gomes, a gay Brazilian photographer who was murdered (strangled) in his own home.

The performance starts at the end: two dancers of the urban Fractal Collective (Zino Schat and Constantin Trommlitz) silently observe Alair Gomes’ prostrate body (one of three puppets/versions of Gomes, made by Duda Paiva Atelier), while camera lights are flashing. The piece acknowledges a sad irony: in death, the photographer himself has now become the subject of unrelenting cameras, a centre piece of a crime scene.

The next scene jumps back to better times. Sitting on a pedestal, a younger puppet version of Gomes is watching a situation unfolding below: two men are dancing around a bench, testing the waters, checking each other out. Again, the making-of proves indispensable. Gomes’ main subjects were young males who were working out, or gallivanting on the beach outside the apartment building where Gomes lived. Most of the pictures were taken surreptitiously – Gomes ‘stole’ his images of mostly unsuspecting subjects – made from afar with a telephoto lens.

Once the dancers become aware that they are being observed, the first menacing notes creep in. One dancer is harassed by a tracking spotlight, the other is haunted by a rubber foam arm with a camera that is suddenly attached to his hip.

In his earlier pieces, Paiva has shown himself to be a masterful storyteller, with the puppetry – a Duda Paiva staple – giving his performances a decidedly fairytale-like feel. But here, I feel a lack of propulsion, and further need for clarification. Not even the voice-overs (in Dutch, voiced by Paiva himself) can pull everything into focus. These are more like poetic meanderings and leisurely observations. How Gomes likened his pictures to small sonatas, ‘short fragments of time’ (there is a whole picture series called Sonatinas Four Feet). How he was interested in the geometrical proportions of the human (male) body. How he chose ‘eros’ as his philosophy.

The performance was recorded beforehand at Theater De Lieve Vrouw. While the registration offers some nice close-ups and overviews, inevitably, some of the interaction gets lost. There is also less interaction between the puppets and dancers than we are used to. Which is a shame. In a Duda Paiva venture, this is where the real magic happens. Purportedly, this was also one of the reasons Paiva and Fractal Collective wanted to work together: to have this juxtaposition between the usually very tough, highly impervious macho feel of urban dancers and the sensitivity of the highly pliable puppets made of foam rubber.

Even though the puppets are magnificently, and lovingly made – the first puppet is especially haunting, even featuring contusions on his head and back – for the bigger part of the performance, Gomes is a bystander, a spectator of his own life. The two dancers interact the most with the third puppet, the most abstract of the three. It represents Gomes as he starts to explore – and own – his own sensuality and sexuality, his own ‘eros’. But instead of being uplifting, this development adds to the conflict. The puppet reminded me of some of the characters seen in Picasso’s Guernica: anguished and distorted. This union between puppet and dancers is not so much a coming together as a pulling apart.

I would be hard pressed to call Sonatinas 4 Feet a celebration. There is an all-pervasive sadness and anguish the piece just can’t shake, where the first tender caress between a dancer and Gomes inevitably ends in murder. Sonatinas is a sad fairytale with no happy end. 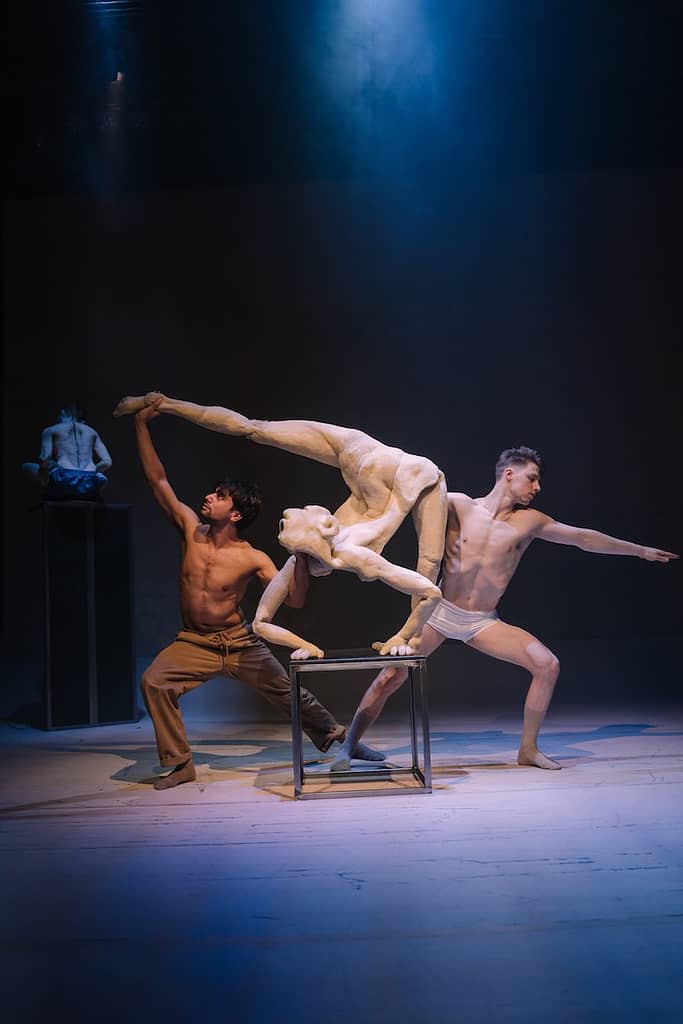