During the CaDance festival, Krisztina de Châtel is presenting Scala, a new choreography which is part of a double bill with Astrid Boons, dubbed Feminale. Two weeks prior to the livestream premiere in The Hague, I visit a run-through of Scala.

Sunlight is scattered over a the tall ships in a small harbour off an industrial area in Amsterdam North. In one of the warehouses there, a circus studio is hidden. For this occasion its floor has been cleared to make place for a single huge centre piece: a staircase that reaches all the way to the ceiling. Impressive as it is as an object, this central piece is also a cause for concern to the choreographer, especially as Scala will be the last large-scale work she will be presenting. Will audiences be able to visit the show in a theatre and experience the impact of this impressive construction at all?

Krisztina de Châtel is one of the driving forces in Dutch contemporary dance. While studying dance at the Folkwangschule in Essen, Germany, De Châtel, originally from Hungary, came to The Netherlands in 1969 to visit the Holland Festival. There she had an encounter with the postmodern choreographer Koert Stuyf. She worked with him for a few years before founding her own Dansgroep Krisztina de Châtel in 1976, succeeded by Dansgroep Amsterdam in 2009. Currently without structural funding, she now works from project to project, creating her own choreographies and opportunities for young and upcoming dance makers.

The questions our society has been dealing with since March 2020, such as social distancing, were present in her work all along, sometimes even quite literally. Her dancers struggled with an environment, a context, or the elements. In Staunch (1987) a group of men is enclosed between four walls – the front perspex see through – which during the performance slowly move inwards. As the space becomes smaller and changes shape, the dancers continue their dance while the encroaching restrictions drive them further together and up the wall. In Paletta (1992), the female dancers are inside an even smaller space, moving inside perspex tubes with a diameter so small they would not be able to lie down.

When it comes to experiencing space, De Châtel is a master of detail. Throughout the years she has worked with a wide range of visual artists, exploring the challenges they have set her and her dancers to the limits. Her practice involves endless counting and measuring, patterns are meticulously analyzed. Control and concentration are key elements in her work. Within these structures it is a tall order for the dancers to transcend the rigour.

Thron (German for throne), originally conceived with VA Wölfl in 1984 and revived in 2017, is about absolute and eternal power. VA Wölfl constructed a floor bordered by wooden boards; a space as a territory. Power is a recurring theme in De Châtel’s choreographies: in Imperium (1990) for instance it was symbolized by a tall stack of chairs. The combined spatial restrictions the dancers experience emphasize our role as humans as a cog in the machine – small but nonetheless present. 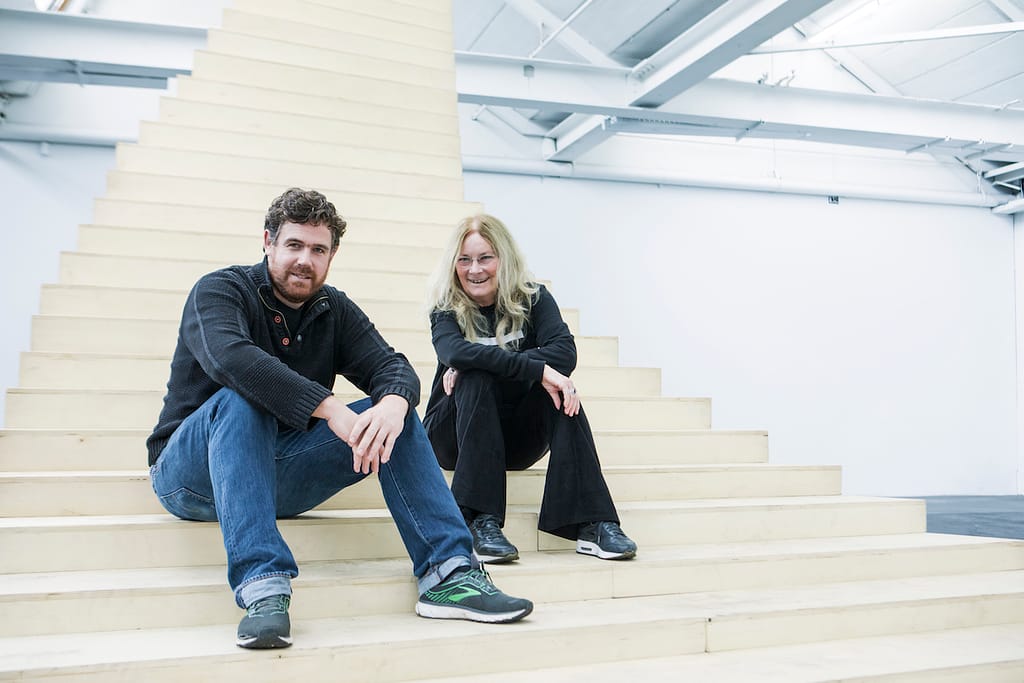 The floor to which the dancers have to relate in Scala are the steps of the tall staircase.  The monumental staircase was designed by De Châtel as a new piece for the exhibition The Third Space in Maastricht in 2018 that showcased her work and specifically the ways it relates to space and spatiality. The idea of the staircase lingered on afterwards. It needed more work, De Châtel decided, as its primary purpose – you only can go up and down – wouldn’t be suited for use in a new choreography. So to create Scala she invited scenographer Theun Mosk to render the stairs fit for dancing. Now it has a small twist in it, but more importantly, the metal construction on which the wooden stairs rest, is mounted on wheels. During most of Scala the staircase turns, at different speeds, creating an unstable platform to move on, with a great risk of imbalance. This element of risk is what De Châtel was looking for as a counterforce for her five female dancers. The speed with which the staircase circles across the floor is at times breathtaking. The choreographer places the women in a potentially dangerous position.

As in many of her works, the five women’s arm movements are another driving force in Scala. The minimalism that characterizes De Châtel’s movements stems from her time with Koert Stuyf when she learned to go to the core of things. Just how precise she is at this, becomes apparent after the run-through, when De Châtel and former De Châtel dancer and rehearsal director Dries van der Post demonstrate how exactly the movements unfold. Timing and movement intention are key. Although the movements look pretty straightforward to execute, the opposite is true.

In Scala the famous arm becomes a fist or is pointed like a rifle. In their costumes by Min Lee, elegant but tough-looking uniforms, the dancers march and struggle like a regiment on the battlefield. But they also prove there is another side to their involvement, when they suffer and comfort each other.

Women have always played an important role in Krisztina de Châtel’s work. Power – and the fight against it – is a recurring theme. But in Scala De Châtel confronts us with women’s roles in a world where multiple wars are raging. She takes the position of women a step beyond the domestic domain and equal opportunities at work that are so often the point of departure when it comes to women’s rights. Her view on the role of women in society points in a different direction to underline the fact that women do play a vital part, also in combat. And by placing women on the battlefield, she makes a fierce and unsettling statement, not shying away from the responsibilities of women in these wars.